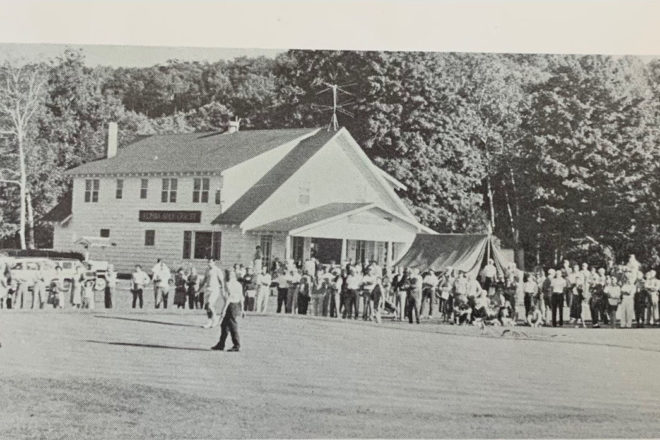 Most Egg Harbor residents and tourists remember the Swiss-influenced golf chalet at the Alpine having brown siding rather than white, as it has now since remodeling and renovation. Golf manager Simon Ward found a photo of the clubhouse clad in white from the late 1940s or early 1950s.

New owners spruced up the old golf chalet at the Alpine a little bit last year, but the renovation work during the past four months has been dramatic. Work last year included a new roof, new landscaping and changing the siding from brown to white – the original color when the clubhouse opened during the late 1940s.

Visible changes from the outside include a chimney for a fireplace between the golf shop and bar/restaurant, and contractors refurbished the cart shed behind the clubhouse and completed an addition and expansion to the shed.

Golf manager Simon Ward said the clubhouse will reopen in phases as golf resumes in April. He said the goal is to reopen the bar and restaurant, and then the upstairs resort rooms by Memorial Day.