To some, the lush green expanses of Door County’s golf courses are a sight to behold. To others, they’re an artificial expanse maintained with pesticides and chemicals and the silent threat to health and groundwater that come with them.

Like fruit growers, the men and women tasked with managing the thousands of golf courses nationwide have changed practices dramatically since the 1950s. Back then groundskeepers fell in love with the miracle pest-control chemicals and fertilizers coming to market, blanketing courses with heavy metals like lead, arsenic, cadmium and mercury, a practice that taints the perception of the game to this day.

Though most of those chemicals were banned by the late 1970s, it wasn’t until the late 1990s that a revolution in thinking about golf course management began to grow. 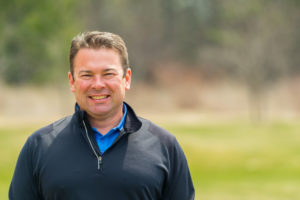 “Now, we don’t apply things we don’t need, and we don’t want to spend money we don’t need to,” says Brian Ferrie of the changing approach to course management. Photo by Len Villano.

“Back in the day, before my time, golf was more about exclusivity, then you had a boom in courses as people went after bigger profits,” said Brian Ferrie, superintendent at Horseshoe Bay Golf Club in Egg Harbor. “Before that they would use lead arsenates on the turf. There was barely any budget limit. It was a lot easier to be more liberal in spraying to cover your tail. Instead of spraying every 10 days, you spray every seven days. They would overfeed the course to make sure everything stayed green.”

In the 1990s, studies showed that golf course superintendents and greenskeepers had higher rates of non-Hodgkin’s lymphoma and brain cancer, among other ailments. Roger Kuhns said fertilizer practices were impacting groundwater as well.

“Most golf courses use synthetic fertilizers in a concentrate,” he said. “Back then they would spread it all over and the soil couldn’t handle it, so a lot of it would leach into the water. This created high levels of nitrogen and phosphorous. On many golf courses you can actually see the karst holes. So if they fertilize those courses improperly, you’ll contaminate the groundwater because once it seeps into the ground in that karst topography, you don’t have any idea where it will go.”

Doug Soldat, turfgrass extension specialist in the Soil Sciences Department at the University of Wisconsin – Madison, said chemicals were applied haphazardly and wastefully.

“In the 1980s and ’90s superintendents would put down nitrogen on Halloween,” Soldat says. “That was a really bad time to do that because the grass isn’t growing at that time of year, so it’s not taking up the nitrogen very fast. It’s not healthy, and not economically smart.”

Now, Soldat calls golf course managers some of the most conscientious users of fertilizers, in part because Wisconsin Department of Natural Resources rule NR 151 requires any entity with five acres or more of managed lawn to maintain a nutrient management plan.

“That plan gets into really specific aspects of their course’s topography and they have to know a lot of technical information about solids and surfaces on their site,” said Soldat, who hosted workshops around the state to teach people how to create them after the rule was written. “They make fertilizer applications based on soil tests.” 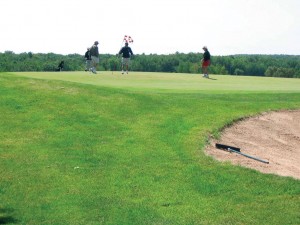 Mary Anne Lowndes, section chief with the Wisconsin Department of Natural Resources, said the rule for lawns was added to NR 151 in 2006, when they realized the existing rules didn’t apply well to turf care.

“When someone was sending in a soil sample for guidance, we were giving out guidance based on growing the most crop you can,” she explained. “Well, with a golf course or a lawn, you don’t want to grow as much and as fast as you can, because you don’t want to be out there mowing it every day.”

The DNR and university worked to identify practices to give lawns what they needed, and to protect groundwater and runoff. “We wanted to help people have the lawn they want without exceeding what grass can take up,” she said.

The standards are considered guidelines, Lowndes said, and there isn’t an enforcement mechanism or any agency the plans must be submitted to, hence, the state has no database of which courses, businesses or municipalities have nutrient management plans in place. Ferrie said the Horseshoe Bay Nutrient Management Plan is re-evaluated every year.

In addition to regulation, courses face more scrutiny from the public. Since the 1990s, many communities fought proposals for new courses, questioning pesticide use and impacts on groundwater. And with more courses came more competition for players and tighter maintenance budgets.

“Now, we don’t apply things we don’t need, and we don’t want to spend money we don’t need to,” Ferrie said. “Everything we apply is becoming more and more site-specific. I really have to look at the question of, what does my golf course need?”

When it comes to protecting waterways, smartly designed golf courses have tremendous advantages over the average homeowner or farmer. While a golf course encompasses hundreds of acres, the fairways and greens are surrounded by buffers of taller, thicker grasses that filter water before it runs into adjacent streams or soils.

“A good course will have buffer grasses along creeks and ponds, and if they do, the water is typically cleaner leaving a golf course than entering it,” Ferrie says. “The benefit being a golf course, our crop is constant. When a rain event happens on a grass area versus a tilled field, there’s a whole lot more filtration taking place.”

One of Ferrie’s key jobs is watching the weather. If he applies expensive fertilizer to his course before a significant rainfall, it not only washes off the grass, but can cost thousands in wasted nutrients.

The average home lawn won’t have a buffer between mowed grass and the sidewalk, road or ditch, allowing rain to wash precious nutrients into storm sewers and out of the soil, increasing the need for new fertilizer applications.

“The public looks at a golf course and thinks, what a disaster,” Soldat says. “But the scientific literature really doesn’t bear that out. Golf courses only make up two to three percent of turfgrass in the state of Wisconsin. On the whole, they’re the most highly educated when it comes to turf management. They know the economic and environmental issues, and they’re going to lose their job if they don’t manage grounds well or waste money.”

How Safe is the Safety Net?

When it comes to pesticides and fertilizers, golf course superintendents like Brian Ferrie at Horseshoe Bay Golf Club rely heavily on federal and state regulators to make sure products are safe for their grounds and their customers.

“As superintendents, the benefit we have is Wisconsin is a consumer protection state,” he said. “There are a lot of products that we can’t use that others do. Because we’re seasonal in the upper Midwest, typically it has already been used in the southern markets.”

But when those regulators miss, they miss big. In 2010 DuPont’s herbicide Imprelis was approved by the EPA for use primarily in killing dandelions. “It was one of the best herbicides you’ve ever seen, but it didn’t like pine trees,” Ferrie said.

Golf courses around the country experienced massive infections of conifers on their courses, including at Horseshoe Bay and Peninsula State Park. Ferrie estimates they lost 500 trees at Horseshoe Bay, and Peninsula lost hundreds more. When reports initially surfaced of die-offs, DuPont officials blamed applicators, suggesting they mixed the herbicide with other chemicals or applied too much. It didn’t take long for the company to realize the problem was theirs, and they eventually reached class-action settlements with several states.

“That one got through every level of testing,” Ferrie said. “How can we as a golf course have a more stringent process than the EPA, the state, the research stations?”

Jay Feldman, cofounder and executive director of Beyond Pesticides, a Washington D.C. advocacy group, said that’s a safety net with a lot of holes.

“It comes down to this enormous reliance we have on government to say something is OK,” Feldman said.