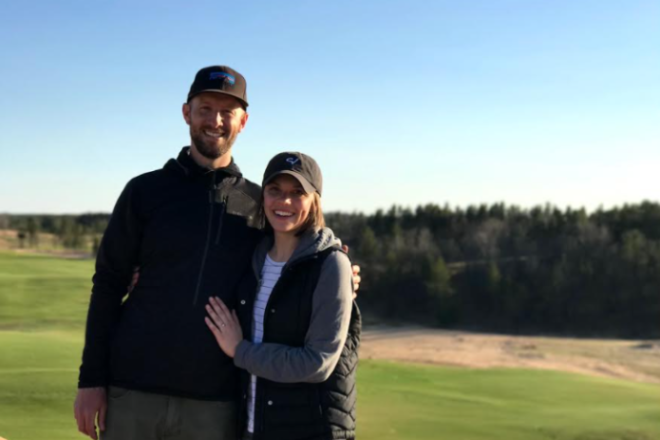 Nick and Cameran Ehlers-Kwaterski are returning to Door County this fall.

Few golfers can successfully hoist a 317-yard drive over the woods and onto the green, cutting off the dogleg on the 353-yard 10th hole at Peninsula State Park Golf Course. But, it’s a feat that Peninsula general manager Jason Daubner has seen Nick Kwaterski pull off.

Golfers often calculate the risks versus rewards of trying a difficult shot, and cutting that much of the corner spells disaster for most players. Kwaterski’s abilities to weigh risks and make things happen have put him in great and unusual positions again and again — both in golf and occupations.

Kwaterski just finished four years as the caddie services manager at Sand Valley Golf Resort, a premier golf destination in Nekoosa, Wisconsin, that ranked as Golf Digest’s Best New Course of 2017 and No. 18 on the magazine’s list of best public courses in 2019. And now a new opportunity in golf and growing obligations to family are bringing him back to Door County. In late summer his wife Cameryn landed the position of executive director of Destination Sturgeon Bay and Kwaterski told Sand Valley managers he could help to train an interim manager this summer and explore new opportunities this fall.

“I had a great time at Sand Valley. Right now I’m just open to something different. I’m not sure what that’s going to be,” he said, though he may stay in the golf world in Door County.

Golf experience and knowledge continue to open doors for Kwaterski, though taking next steps in life can be as difficult as keeping a drive out of the trees. Like many of his efforts — such as his Arizona State walk-on try after a stellar high school career and then his later move to Western Illinois University, where he quickly earned a scholarship — Kwaterski took quite a risk before landing his Sand Valley position.

Five years ago, he had a comfortable, money-making gig as a caddie at the McArthur Golf Club in Hobe Sound, Florida. He was playing some tournaments and getting to know great golfers such as course co-owner and three-time major golf championship winner Nick Price. Kwaterski also caddied for celebrity members such as longtime NFL coach Bill Parcells. He was banking generous tips as a daylong caddie for the likes of New York Mayor Michael Bloomberg when he found out that Sand Valley would need someone to manage more than 200 caddies.

“I heard about this resort being built in Wisconsin that was going to have a caddying program, and I’m like, ‘This sounds like the job for me,’” Kwaterski said. “I caddied the first year in 2016, and busted my butt and tried to impress the right people. They hired one guy; he only made it for, like, three months and then got burned out. I was kind of at the right place at the right time in 2017, and they offered me the job, and here we are, five years later.”

Kwaterski enjoyed training caddies of all ages at the “walking-mandatory,” $200-per-round Sand Valley and Mammoth Dunes courses in Nekoosa. He also took pride in one of the junior caddie program’s greatest successes. Ten of the junior caddies have earned Chick Evans Scholarships: full-ride scholarships to the University of Wisconsin-Madison as Evans Scholars. Kwaterski helped to promote those caddies and provided support for finalists when they traveled to southern Wisconsin for intense interviews with representatives from the Western Golf Association.

Kwaterski said he and seasoned caddies helped junior caddies to develop their interpersonal skills. The best caddies not only can carry a bag that weighs 25 or 30 pounds for 36 holes in a day, but they also have — or develop — a good personality for interacting with guests. They need to be able to have and sustain a conversation, in addition to providing prompt, accurate on-course information.

“They work seven days a week,” Kwaterski said, “and each day, they’re going to meet somebody else.”

In early summer, Kwaterski was not focusing on his golf game. But that changed in late July when he finished in a tie for second at NorthBrook in Luxemburg to qualify for the Wisconsin State Open. His 1-over-par round and top 10 finish got him into the Open in August at Sheboygan at Pine Hills, a private club that had been, he said, one of the courses on his “bucket list.” He’d qualified to play at Blackwolf Run a couple of times in previous Wisconsin State Open tournaments, but this was an exciting new venue for him.

“I still really enjoy tournament golf,” Kwaterski said. “It gives you a chance to get out of work and compete, and to possibly make a few bucks in the tournament.”

He has recently been directing most of his non-work time to his family, including young daughter, Lucy.

He and his wife Cameryn met nine years ago while both were working at the former Mission Grille in Sister Bay, and he said great opportunities seem to keep opening up for them at the right times. In this case, the Kwaterskis can return to their home county to raise their baby girl and to allow Lucy’s grandparents to spend more time with her.

“I think like a lot of people in Door County, you kind of take it for granted,” said Kwaterski, who left the county 18 years ago. “You want to get out and see different places, but once you get away you realize how good of a place Door County is.”