It was only a few years ago, back in 2008, that Apple released its App Store with the popular phrase “There’s an app for that,” changing the way technology worked at our fingertips. The reach quickly extended to communication, health, finance, weather and even sports.

In fact, it’s possible no other sport has been more deeply affected by growth in technology. Pull Grandpa’s clubs from the attic and you’ll quickly understand. Grandpa may have passed the game on to his grandsons, but nowadays, they’re playing it much, much differently. Here are a few innovations rapidly changing the game in 2015: 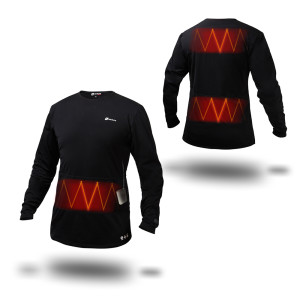 In Door County, and the rest of Wisconsin for that matter, the golf season is often a short one, made frustratingly so by Mother Nature’s colder side. Winter generally extends into April and arrives far too early in October, shrink-wrapping the golf season to fit around Memorial and Labor Day.

Golf junkies, though, will tee it up as soon as they see snow recede from the bunkers. What remains is the motion that torques an aging body 80-100 times on a windy, rainy 40-degree Sunday. For those days when the golf term “stinger” takes on a completely new meaning, there is Venture Heat clothing.

With batteries lining (though seemingly hidden) the inside of the clothing, energy is transferred to the wearer, much like hand-warmers, only these are permanent hand warmers that cover the body and feature an off switch. The chargeable inserts keep the body warm and, most importantly, loose for the duration of any four to five-hour round. Venture Heat is available in the form of jackets, vests, long-sleeved shirts and pants, and completely lowers the rigidity of any early spring or late fall round.

Fashionable on and off the golf course and made with winter sports in mind, the heated clothing might be secretly designed for the Wisconsin golfer, too, who needs to shovel the driveway after that mid-April snowstorm. 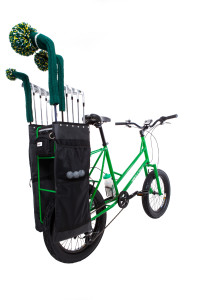 There’s a conundrum in the game of golf. Those who shy away from the sport generally cite unfair requirements from their day and their wallet, sometimes both. Unable to create a lower price index for the generally expensive hobby, Higher Ground Golf Co., creators of The Golf Bike, want to at least make the hours spent at a golf course more efficient.

So they’ve created a way to burn carbs while making birdies. The shame of choosing a Saturday foursome instead of a Saturday workout is a thing of the past. So, too, is riding in a cart all day. With a bag fashioned to the back of The Golf Bike, the only thing missing is a golfer looking for some exercise.

Its wheels are designed to spread the tread widely, limiting any damage to the course while also providing enough grip to cruise through rough, fescue and any other golf course topography. Off-roading never sounded so fun.

“There is nothing that can duplicate what this can do,” Todd May, creator of the bike, said. “I get nine holes in within an hour, with exercise that doesn’t impact my knees, ankles and joints as I get older.”

Foursomes are also no longer bound to the pairs of two players riding in the same golf cart. Four Golf Bikes is just like four individual golf carts, and you no longer have to sit and wait across the course as slow-playing Steve battles a tough lie in the rough. This all means faster rounds and fitter golfers. Check and check.

While the Apple Watch might be the most attractive piece of wearable technology found at golf courses this year, it won’t be the most helpful. The watch will almost surely have GPS capabilities designed for those golfers, which sounds great, but as much as it might help golfers locate their errant drives, Zepp Golf will keep them from missing the fairway in the first place.

Zepp Golf is a tiny, neon green device (about the size of quarter) that, once clipped onto a golfer’s glove, begins analyzing every swing via motion sensors embedded within. Synced with any mobile device, Zepp Golf takes over as a teacher.

Each swing appears on the device in 360 degrees of manipulative visuals. But that’s just eye candy. Each swing is then scored on a 100-point scale with a set of golf jargon measurements like club speed, hand plane, tempo, etc. Club plane below par? The app offers tips and drills for improving every facet of the swing. It truly can function as a talking, testing, teaching professional both in your pocket and on your wrist. Unlike a teaching pro, though, there’s no talking head know-it-all peering over your shoulder. It’s much, much quieter; so insignificant that you’ll forget it’s even there, grading your every swing.

Finally, once those swings feel up to snuff, one final test remains: comparing them with swings of Tour winners Keegan Bradley and Brendan Steele. Welcome to the big show.