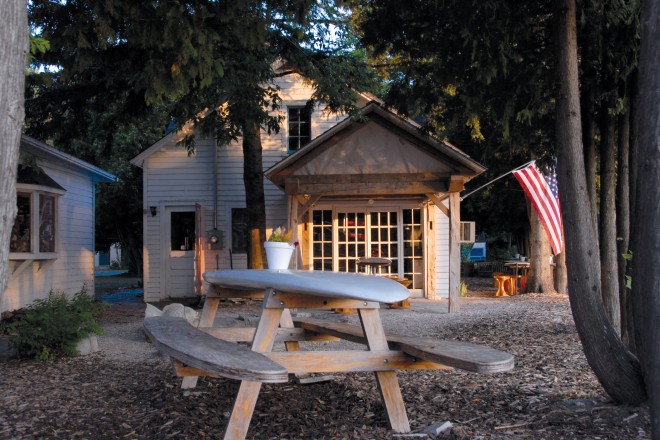 If you’ve never eaten at Good Eggs you are, in my opinion, missing out on one of Door County’s best and most unique breakfast experiences.

(Maybe I’m biased:  Joel Bremer, owner/manager/head cook at Good Eggs, is a friend and former roommate. I was actually one of Joel’s guinea pigs for the restaurant when finalizing the business idea and testing recipes. He transformed me from a person who disliked eggs in nearly any form to one who obsesses over Good Eggs omelet wraps. I mourn each year when the restaurant closes down for the season.)

Now in its seventh year, Good Eggs is immensely popular with locals, seasonal homeowners, and tourists of all ages and walks of life, as evidenced by the line frequently spilling out the door. The menu is simple:  three styles of made-to-order omelet wraps. While this might sound limiting in appeal, it actually easily pleases all palates due to the variety of items you can choose to have – or not – in your wrap. It can also please the same customer over and over again – just ask local real estate broker Kevin Nordahl, winner of the first Good Eggs Customer of the Year award in 2001, who ate there nearly every day that season and is still there multiple times weekly.

Despite its laid-back atmosphere and décor – the restaurant is predominantly decorated with surfer and bike gear, with some funky art thrown in – Good Eggs is highly organized:  You need to go in the IN door – the smaller one on the left, not the French OUT doors – in order to place yourself in line correctly. Then, you can serve yourself coffee, or, in summertime, order a fresh fruit smoothie. When the line has moved along enough such that the grill has room for your wrap, you answer the questions Joel (or whomever is cooking) asks you, when he asks them. No jumping ahead on answers – he’s cooking eight breakfast wraps at once, and can’t/won’t remember which flavor tortilla you want when he’s still trying to figure out who is having which vegetables.

Originally from Moorhead, Minnesota, Joel came to Door County by way of a college roommate whose parents had a condo in Egg Harbor. His roommate knew Joel was a sailor and a cyclist, and introduced him to “the boathouse boys” at Nicolet Beach in Peninsula State Park, who put him to work that and subsequent summers renting and maintaining the beach bike fleet, teaching and rescuing sailors, and scrubbing paddleboats. “Always having a lot of fun here” kept Joel coming back every season, even if it wasn’t clear to him after college or even in the ensuing handful of years that he wanted Door County to be his home base. He did know, though, he “wanted to find a beautiful place to live instead of just getting a job and ending up living wherever that job was,” he says. “After living in the Rockies and on the East Coast, and visiting Central America, Japan, and other places, some of my undergraduate coursework in colonialism started to register with my own experiences – particularly the recognition of the tie indigenous populations have historically had to the land, the place they live – and it started to dawn on me that I’m very much a Midwesterner. Door County then became an obvious choice to call ‘home.’”

Those early work experiences in Door County were important in shaping Joel in three ways. First, he learned a great deal about customer service. Second, he became attracted to the concept of self-employment, or, more aptly, “not getting hassled by ‘the man.’” Finally, Joel took on second jobs where he learned the restaurant business. Having saved enough money teaching English in Japan to buy an old school bus, Joel combined those lessons of self-employment and service to create a “charter sleeper coach ski tour bus machine manic travel service.” He says, “For a few years, I waited tables to finance this hair-brained adventure – a constantly breaking-down bus always meant not breaking even – but everybody always had so much fun! I quit when I came back from a harrowing trip to Steamboat to learn a close friend of mine had died. The risks of the road seemed different after that.”

About 10 years ago, in the midst of “that fantastical fiasco of a financial failure,” waiting tables and doing some writing for the Peninsula Pulse, Joel met Fred Alley, a founder, writer, actor, and driving force behind American Folklore Theatre. On meeting Fred, Joel says, “I was writing a column then, but Fred was actually interested in a classified I had written where I described the car I was selling as UNSAFE. We became fast friends.” Fred acted as a mentor to Joel with regard to his writing as well as life in general. Joel explains, “After the bus business ended, I was describing myself as ‘between projects.’ I was living out at Fred’s farm in the winter then, and Fred and I would talk about John Irving’s novel The Cider House Rules and Homer’s need to ‘be of use.’ Fred had pointed out to me, ‘You know, you can always be better at what you’re doing now,’ but I wanted to do more. Fred thought the casual ‘breakfast joint’ niche was wide open in Door County, and that if I could make the food he could help bring in the crowd. And make sure the taxes got paid on time!” Joel was particularly motivated to do a project with Fred, his previous experience having made him realize “partnering with someone much more talented than you was the clever thing to do.”

The partnership didn’t work as planned, though. On May 1, 2001, exactly one month after the business papers were signed and weeks before Good Eggs was to open, Fred Alley tragically passed away. Although devastated by the loss of his friend and business partner, Joel notes, “Fred had an amazing way of steamrolling through work – during that one month we were business partners, he managed to get our change of use permit, and much of the basic groundwork taken care of for establishing the restaurant. I decided Good Eggs was a gift and to run with it.” In developing the Good Eggs concept with Fred, Joel says, “We wanted to have a very egalitarian restaurant, one that would serve and please everybody in the same manner.”

Joel notes the biggest challenge he faces is to run the same restaurant in the shoulder seasons – “where I’m the only one working, and I’m only serving 20 wraps a day” – as in the high season, with three or four employees working, serving 200 wraps a day. Finding staff is also a problem, as for many Door County businesses, and so is managing them well. “That’s been my biggest learning experience at the restaurant, so far,” says Joel. “Recognizing that, as much as I knew about service from waiting tables, I needed to learn how to serve the employees who serve my customers.” Joel remembers Fred frequently saying, “Life is too hard to be anything but kind.” Joel tries, though he knows he doesn’t always succeed, to keep that in mind with both staff and customer interactions, attempting to “make the disposition of the restaurant reflect that sentiment.” And, while the seasonality of Door County’s economy is a challenge, it is one Joel enjoys:  “By the end of October, I’m over seeing people, and by May I’m excited to see them again. That hasn’t changed in six or seven years.”

Other things have changed, though. The business, allowing him in the early years to go ski-bumming in the winter, now allows him to live year round in the place he loves, with the person he loves; this spring Joel married Lauren Gress, who followed some of the same Door County paths as Joel, waiting tables and working for the “boathouse boys” as guide instructor and store manager. Her current job as a teacher at Gibraltar Area Schools leaves her summers off to be the partner Joel never had at Good Eggs. Joel likes this new personal rootedness, as well as his work:  “It’s a trip running a business that people come back to year after year on their vacations, watching their families grow up, seeing 14-year old kids that I remember feeding when they were seven. I’m really enjoying this.”