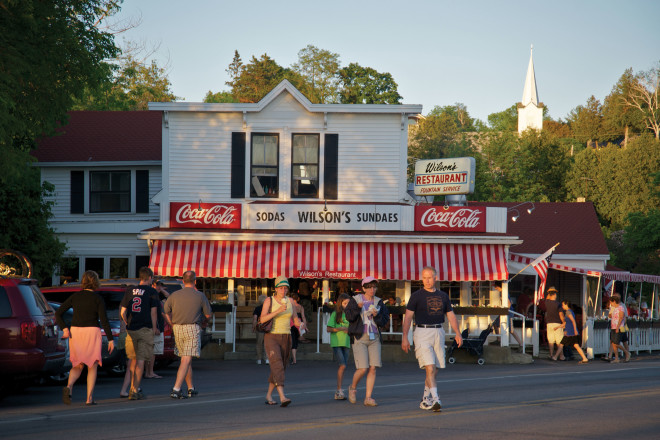 I navigate my way over the glossy wooden floor, wearing my red Wilson’s t-shirt and khaki shorts, holding a tray of hamburger baskets above my head. A toddler bobs up and down by the neon-lit jukebox. American Pie by Don McLean plays from the speakers. A white-haired woman tells the cashier about her days as a “Wilson’s Girl” while browsing through postcards, a dozen depictions of the historic white building accented by red and white awnings. A man sips from his liter-sized frosty mug of homemade root beer. A teenage boy shakes hands with a statue of Uncle Sam. The girls serving ice cream behind the white marble counter shout customers’ numbers, “Eleven! I can help eleven!” 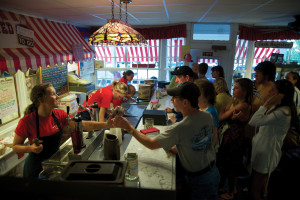 I set the hamburger baskets before the family of three, a young girl coloring an epic sundae complete with cherries and whip cream on the back of her placemat while her father flips through song selections and her mother takes in a spoonful of chocolate malt.

“Enjoy,” I say, setting a red ketchup bottle and yellow mustard bottle at the end of the table.

A collage of many collective moments, this describes a typical lunch shift at Wilson’s Restaurant and Ice Cream Parlor in  Ephraim, where I have been serving for three seasons. The atmosphere is nostalgic Americana, like a Norman Rockwell painting:  blue booths, mini jukeboxes, and classic food. The scene is so visually stimulating, customers usually spend three to four minutes gazing left and right, up and down before even approaching the host stand.

Established in 1906 by Oscar and Mattie Wilson as an ice cream and candy shop, Wilson’s Restaurant and Ice Cream Parlor stands as one of Door County’s most famous and recognizable restaurants. After decades of various owners, Roy and Diane Elquist took on the busy establishment in 1997 and play a very active role in Wilson’s day-to-day operations, greeting and seating customers, maintaining the old-fashioned root beer machine and historic building, and learning the names of over 60 employees every summer.

There is something special about Wilson’s, for everyone. Generations of families who visit Door County stop at Wilson’s every summer for the Dark Secret Sundae (hot fudge, chocolate ice cream, and marshmallow topping) or the All-American Cheeseburger they crave all winter long. For others, the music, the retro signs, the shakes and malts, remind them of their childhoods. And the rest just enjoy some good atmosphere, classic food, and the choice of over a dozen flavors of ice cream. 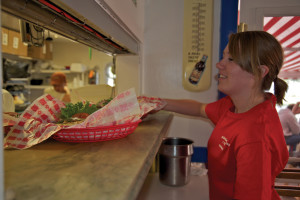 At the end of their meal, as I clear the table and set down the check, the customers ask where I went to school and how I discovered Door County. They wonder if I ever get tired of ice cream and burgers.

Honest. Between taking and delivering orders, brewing coffee or clearing tables, conversations with my fellow servers usually go between the latest Door County gossip and what we might order at the end of our shift. We stand by the kitchen window, sipping our Cokes and wonder, “A Wilson’s Burger or a BLT? A chocolate malt or a Junior Sundae?” But that’s only the front line. That’s what I see.

The kitchen is another scene entirely. If the host seats you in the indoor patio, you have a chance to catch a glimpse of the cooks placing patties on the broiler or hear the sizzle of the fryer as they dunk French fries and cheese curds. The cook you see may be Edrik Engberg, a Door County local and employee of Wilson’s since 2002. While Engberg is cooking, he will have a number in his head, the number of burgers currently in the broiler. This number stays in his head as he jokes with the other two cooks, sings along with Willie Nelson, Pink Floyd, or the Rolling Stones, and retrieves sides of mayo or extra plates for the servers calling through the window. The kitchen can be chaotic, and very hot.

“The beginning of a shift is like preparing for battle,” says Engberg. “There are three people making a lot of food during the day.” He describes the kitchen, which can reach temperatures of 100 to 110 degrees on a hot summer day, as a “little zone.”

“It helps to have good people to work with. We all like each other a lot,” he says.

Spending winters as a student in Madison, Wisconsin, Engberg says that working for Wilson’s each summer “is like a totally different world, like coming back to be with friends. I love Door County so much and am so happy to be home. When I go back to school, I have the urban culture and live the city life, it’s a good change.” 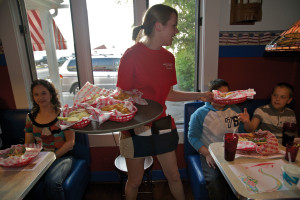 So what’s the cook’s favorite meal during the season?

“You can’t go wrong with a club [three toasted pieces of white bread with turkey, bacon, lettuce, tomato, and mayonnaise],” says Engberg. “But they are the worst to get swamped in. When you see you have a line of tickets with BLTs or clubs we call it ‘getting burned.’ It’s a terrifying experience. Sometimes the tickets get so long, you feel like you are never going to get out of the club sandwich pile.”

Engberg believes that there are many reasons Wilson’s remains a popular destination:  “Reasonable prices, good service, historical place. People like to come back.” As do the employees.

Like myself, Engberg feels “a sense of pride after a long day’s work.” We make plans to meet for a bonfire, a late night swim, or simply a drink to relax. Wilson’s, I have realized, is so much more than food or atmosphere, but people and memories. There is something special about that place, and as far as recommendations go:  my favorite is the BLT on wheat.