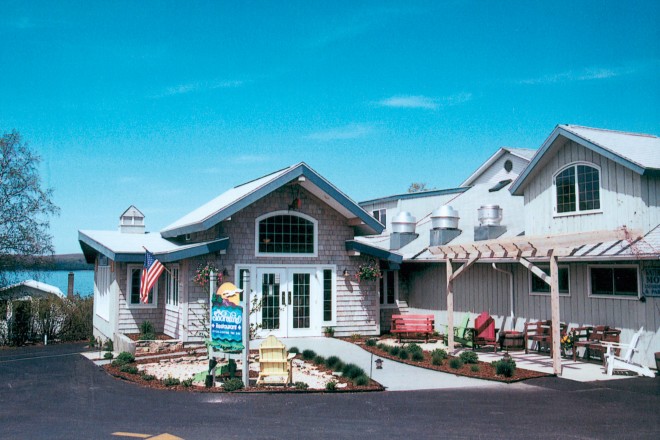 Mike and Mary Mead have a saying about how your meal is served at their Shoreline Restaurant in Gills Rock: “First you eat with your eyes.” If that’s true, between “drinking in” the panoramic water view and enjoying the presentation, you could be full before you take your first bite.

But the Meads invite you to dig in, choosing from a menu that boasts tried and true family favorites, fresh whitefish dishes and a daily features menu with ever-changing nouvelle cuisine items.

“We’ve been experimenting with Thai, Italian and West Coast dishes,” Mary says. “With six different entrées every night, it makes it more fun. We like to keep it fresh.”

“It’s hard to pigeon hole who we are,” Mike adds. “We do more fresh whitefish than anyone, but I also grill a mean steak.”

The Meads’ efforts aren’t lost on Friday night regular Greg Diltz of Sister Bay. “We go as often as we can in the summer,” Diltz says. “Mike’s cuisine is fantastic – the pan-fried perch is a favorite. I like the fact that there are a variety of dishes that change frequently.”

Diltz is also partial to the intimate atmosphere of one of the few Door County restaurants with a “true sunset view.” And, Diltz says, “The occasional wait on Friday night is offset by the camaraderie of locals and other regulars around the bar.”

According to Cathy Ward, who has worked at the Shoreline since 1999, the camaraderie Diltz speaks of is the result of the kind of hospitality that’s influenced by the welcoming feeling of a large family’s home-based entertaining.

“When you have people in your home, you go an extra yard setting the scene and atmosphere,” Ward says. “It’s not easy to pull that off, but it comes through at the Shoreline. They do a great job at keeping that tradition alive.”

Both having grown up in Waukesha as members of families with six children, Mary and Mike come by entertaining a crowd naturally. And with the Shoreline, the couple has enhanced the family welcome over the years with their four daughters (and a number of their visiting first cousins) pitching in with the business. From rolling silverware in napkins, to waiting tables and cooking, daughters Rachael, Cassie, Jamie and Shannon have been an active part of the Shoreline since the Meads took it over in 1990.

Now with all the girls in their 20s and pursuing their education and careers, Mike is amused by a memory of his second youngest in the Shoreline kitchen. “I remember Jamie standing on a pickle barrel rinsing perch, one at a time,” he says, while miming a tentative two-finger hold on the tail of a fish. “She was nine and would come in to work every day.”

Mary has found mixing business with family gratifying. “It’s about family and tradition – and it goes both ways – your customers come in with their families and you watch their kids grow over the years,” she says.

Mike agrees. “It’s pretty cool to be a part of a lot of people’s memories –  food does that” he says. Mike should know. As a boy, he would compare restaurant spaghetti dinners to his mother, Dee’s, discovering they all fell short. He promised her when he grew up and owned a restaurant, he’d serve her a worthy spaghetti entrée.

“Mama’s Spaghetti” is joined on the menu with other family favorites like Chicken Marni, Granny’s Chocolate Cake, Mike’s Lasagna, homemade soups, and the coveted Key Lime Pie. The latter’s ingredients were divulged to Mary through former Shoreline owners, Craig and Susie Woerfel. This dessert was the creation of Craig’s mother and remains one of the most closely-guarded secrets in Door County.

Although Mike’s premonition pointed the way to restaurateur, the Meads (who were high school sweethearts at Catholic Memorial in Waukesha) started off  on different career paths. Mike earned a Bachelors degree in business administration from the University of Wisconsin-Whitewater and Mary received an interior design degree from the University of Wisconsin-Madison. Mike tended bar at the Baileys Harbor Yacht Club in the summers during college and Mary waited tables in Madison.

After deciding to make Door County their permanent home, the couple worked for over 10 years in the hospitality industry in northern Door County. Mike worked as a bar and lodging manager for various establishments including the Hotel Du Nord, while Mary waitressed at Al Johnson’s, the Alibi and La Puerta, all in Sister Bay.

Then came the call from Susie Woerfel asking the Meads if they’d consider leasing the Shoreline. “Susie really helped us a lot and guided us on our way,” Mary says. “We started with their menu because we were rookies and it slowly evolved.”

Running the Shoreline was the first time Mike and Mary had worked together. With Mary slated to manage the dining room and her husband the kitchen, the couple turned to Mike’s brother-in-law, David Nienow, for training and advice. Nienow had worked as head chef at the Hotel Du Nord from 1974 to 1978 and then continued as a restaurant owner in Vermont. What did he recommend? “He told me to use fresh ingredients, especially fresh whitefish,” Mike says.

Mike also gives a nod to his wife for helping him find his way in the kitchen. “Mary would go off to waitress at night and I’d watch the kids,” he says. “She’d leave the recipe on the counter and the ingredients in the fridge.”

Mike may have looked to others for cooking tips in the early years, but the generous portions have always been his idea. “There are restaurants I’ve been to where I’ve been served a little pile and I go away hungry,” he says. “We don’t serve à la carte. There’s a vegetable and starch included with every meal as well as a salad.”

When they took over the Shoreline, Mary says they moved from a diner-like breakfast and lunch environment to a moderately priced restaurant reflecting the natural beauty of Door County. New entrées were introduced to please the entire family.

The couple also changed their menu to emphasize dinner selections over breakfast items. In recent years, breakfast was eliminated. From May to November, the Shoreline serves lunch from 11:00 am to 3:00 pm and reopens for dinner at 5:00 pm. “We’re more of a destination restaurant rather than location,” Mary says. “We serve from 200 to 225 at dinner during the week, with a larger crowd on the weekends.”

The first summer they opened, the Meads also changed their bar menu. Canned beer was replaced by bottled, with a few brews on tap. A basic wine selection was also added. Since that time, the bar has expanded to include a sizable wine list and, as of last year, rail drinks.

Since they purchased the Shoreline in 1995, the Meads have changed more than the menu. A new enclosed sun porch located steps below the bar added 18 more “front row” seats for sunset viewing and the kitchen was expanded. An outside deck and spacious indoor waiting area were also built to provide comfortable seating prior to a place in the dining areas.

Traditionally, the Shoreline opens on Mother’s Day weekend. This year, Mike and Mary will be welcoming their youngest daughters, Jamie and Shannon, back from travel and school. Mike’s sister, Connie Brandt, will also join members of a staff who returns year after year.

More than likely, a few photos will be added to the large display hanging on the back wall of the restaurant showing family members – and people who have become like family – enjoying the Shoreline both as workplace and meeting place throughout the years.

Cathy Ward sums up the reason staff and diners keep coming back. “It’s an enjoyable experience,” she says. “The food looks and tastes good, and there’s the benefit of a beautiful setting with a sunset. It makes for a pleasant evening no matter what side of the table you’re on.”