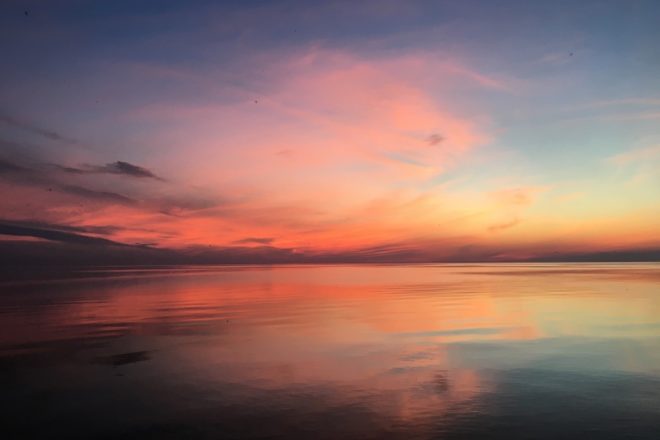 Door County is a special place. It’s been said a million times, and it will be said a million more. Sometimes I think it sounds clichéd, but that doesn’t make it any less true. The locals grow up with its magic, and transplants and visitors are lucky to get a taste.

That’s why I debated writing this in the first place. I’m not the only person – and won’t be the last person – who has been touched by a peninsula so rich in history, culture and natural beauty. What makes me special, especially because I’ve lived here only for a full year and a summer?

But I also work at a newspaper, and how often is it that you’re able to say goodbye to a place you love and the people you love in it through a printed publication? So here we are.

Working at the Peninsula Pulse has allowed me to see and learn about the peninsula in a very special way. As an arts and entertainment intern, then a full-time reporter and social-media editor, it’s been my job to interview Door County artists and musicians, dive into local municipal operations, spend a summer day on Washington Island, attend school board meetings, go on hikes, kayak the Sturgeon Bay Canal, tour new theater facilities and so much more.

I’ve met so many interesting people and done so many cool things in an effort to tell the stories of this place. And I’ve told so many that it’s hard to pick a favorite.

Not all of them have been positive. Though the charm of the county runs much deeper than some of its issues, it still has issues. I’ve written stories about the lack of affordable and available housing, and the lack of internet access, both of which I’ve experienced firsthand. It’s worth noting that there is still work to be done, and it shouldn’t come as a shock that it’s hard to attract young people who didn’t grow up here and don’t have connections to move here to start long-term careers.

My time at the Pulse has been monumental for my career. I couldn’t have asked for a better first full-time gig after graduating from UW-Madison. I’ve learned so much from my co-workers, who have all helped me grow in one way or another – in more ways than I can say, really.

I won’t forget happy hours at the office, volunteering for two Door County Beer Festivals, talking on the podcast, team trivia, working with the video crew and even Dave Eliot scaring the crap out of me with the Friday gong that signals our release to go home for the weekend.

But I have my friends to thank for the memories that are even nearer to my heart. I’m not sure how I got so lucky to stumble across a handful of Door County locals in Madison, but when I applied for an internship in the county, they were ready to welcome me into the family with open arms.

There are so many memories that stand out that I don’t know where to start. Playing Russian card games at the AC Tap. Hiking among the trilliums at the Headlands. Cooking meals over a fire in our secret spots. Watching the stars at Camp David. Getting stuck in the middle of a thunderstorm while camping. Treating ourselves to wine at Trixie’s. Taking bitters shots at Husby’s and then bowling at the Bowl. Watching the sunset at Pebble Beach. Biking the backroads across the peninsula. Playing pool at the Blue Ox. Singing in open mics at Husby’s. Taking the boat out to Europe Lake with a case of Hamm’s. Playing winter broomball. Living with my significant other for the first time.

Now I don’t know where to end.

But I suppose my end is here, and what a strange time for it to come. I cannot properly give my goodbyes to my friends, colleagues and favorite places. It’s in my nature to leave with a bang, but it will have to be a small one this time. (Disclaimer: I know that these troubles of mine are insignificant in the face of the real tragedies resulting from COVID-19.)

So though I am moving across the country to chase love (and of course take the next steps in my career), I know this won’t be the last story that I’ll get to write or the last time I’ll be touched by the peninsula.

With that … Goodbye, Door County.

All photos by Celeste Benzschawel, just some of the many.

Celeste and her partner Jordan on a hike at the Kangaroo Lake Nature Preserve.

The Fourth of July with the Camp David crew of summer 2020.

A Hamm's-filled boatride at Europe Lake.

The AC Tap will be forever missed.

A weekend family stay at the Sherwood Point lighthouse.