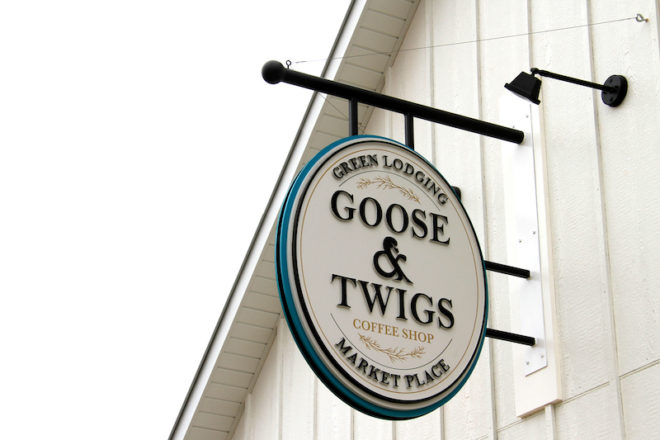 The name Goose & Twigs was the result of a three-month brainstorming session to find a meaningful name. Photo by Aleah Kidd

Sister Bay has expanded its roster of coffee shops with the opening of Goose & Twigs, a green lodging establishment, coffee shop and marketplace. The business is the result of an idea Gustavo Gallardo had after visiting friends in Sister Bay three years ago.

“We fell in love with Sister Bay and realized as we were coming up to visit more often, there were not a lot of options to stay within the village,” Gallardo said. That set in motion a plan to create a new lodging option in the heart of Sister Bay.

Gallardo and his wife, Renata, chose the property at 2322 Mill Road, across from the Sister Bay library, because it was within walking distance of the spectacular waterfront and other area amenities and attractions. The property will be home to two buildings: one, now completed, contains four guest rooms and has an attached kitchen and dining area. The second, which will open later this year, will offer five additional guest rooms.

The café side of the business is now open to the public for breakfast, with plans to expand to serving lunch in the near future. For now, you’ll find the expected barista go-tos of coffee and espresso drinks, plus a variety of customizable fruit-smoothie and lemonade options. Current food items include fresh baked goods (fritters, doughnuts and more) and parfaits. All fruit is fresh-frozen, and items are made to order with no added sweeteners.

Beginning in May, the full breakfast menu will feature a selection of items that hit on all the morning favorites – but with a tasty twist. Chef Jamie Dahlin has taken tried-and-true recipes and added something extra to create memorable meals, including specialities such as the lox bagel with smoked salmon belly, French toast using brioche and Door County cherry mash, and a taco with bacon bits and green-pepper pico de gallo.

Take, for example, the parfait. I ordered a mango parfait, fully expecting the simple version often found on deli shelves. I was happily surprised to receive a glass cup holding a tantalizing display of diced mango, low-fat yogurt, granola clusters, house-made whipped cream, apple-cider pearls and a charred lemon quarter. The mixture of textures – creamy, crunchy, chewy – plus a spritz of smoky citrus were novel and unexpected.

Each ingredient is thoughtfully sourced (primarily local), and you can see this throughout the menu. Bacon and ham come from Nueske’s, cheddar from Vern’s, brioche from Le Chic Patissier, maple syrup from Jorn’s Sugar Bush and croissants from Valley Bakers. You can even add a bluepoint oyster to your loaded Zinfandel bloody mary.

Dahlin is eager to test new techniques and enjoys finding ways to elevate his recipes, putting to use tools such as a sous vide and an N20 whipped-cream charger. He’s spent the last two seasons cooking in Door County at various venues including Mr. Helsinki, the Fireside and the Boathouse. “Jamie has been an amazing addition to our team,” said Gallardo. “We really couldn’t do it without him!”

After meeting Gustavo Gallardo – or  Gus, pronounced “goose” – I could hazard a guess about where the first part of the name Goose & Twigs came from, but there’s more to the story. Gallardo and his family moved to the United States 14 years ago from Mexico, and as his kids began bringing their friends over to visit, Gallardo became known to them as “Goose.” In Spanish, the word for “twigs” is used as slang to refer to children. Therefore, Goose & Twigs represents Gallardo and his family. What really cemented the name was the migrational nature of geese: leaving and returning with the seasons. Gallardo wants Goose & Twigs to be a home away from home where guests can return each year.

The building itself fits with our focus on sustainability in this issue. The architect, Sturgeon Bay’s Virge Temme, designed and built the structure to be LEED-certified, meaning it meets all of the standards laid out by the U.S. Green Building Council to be designated as LEED (Leadership in Energy and Environmental Design). Lighting design, water fixtures and appliances were all chosen specifically to conserve energy and waste; the super-insulated walls are near net-zero energy; rainwater is captured for landscaping; and food waste is composted. The second building, still under construction, has been placed at a specific angle on the parcel of land to efficiently house solar panels on its roof.

Goose & Twigs also partnered with Door County Coffee to create an exclusive Ethiopian and Colombian coffee blend called Goose & Twigs Private Blend, sold only in its shop. Another set of shelves holds wines from Door Peninsula Winery and a selection of domestic and international choices, expanding the wine varietals for purchase.

The grand opening of Goose & Twigs took place on April 1, and the crew is using this time to get to know customers and fine-tune the menu. “The first week has been good!” Gallardo said. “We are working on our processes and learning what we need to fix to be ready for summer.”

Goose & Twigs will be open year-round, with the coffee shop and marketplace open 8-11:30 am daily except Tuesdays.

Listen in with Andrew Kleidon and Aleah Kidd on the Pulse Podcast talking with Gustavo “Goose” Gallardo and Chef Jamie Dahlin from Goose & Twigs.