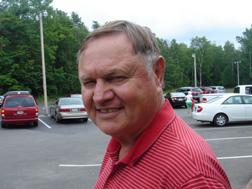 Ninety golfers (65 men and 25 women) turned out for the annual Gould-Chomeau Tournament held at Peninsula Golf Course on Sunday, August 1. It was the 33rd year of the event, but the first year in which the tournament raised money for a scholarship fund for Gibraltar High School. It was also the first year in which the minimum age requirement was lowered to 40 (instead of 50).

Twelve women and 27 men, 70 years and older, were among the field, while nine men, 80 years and older competed on the hot, muggy day. The ever-strong Dick Woerfel, playing with an 18-handicap, was the tournament’s most senior competitor, at the young age of 95.

Doug Ferdon and Tomm Hummel both shot remarkable scores of 71, with Ferdon beating Hummel in a card playoff for the Low Men’s Gross. Amy Gehrke of Muskego (see Resorters’ photo) captured the Women’s Low Gross with a score of 82. For further results, see below: