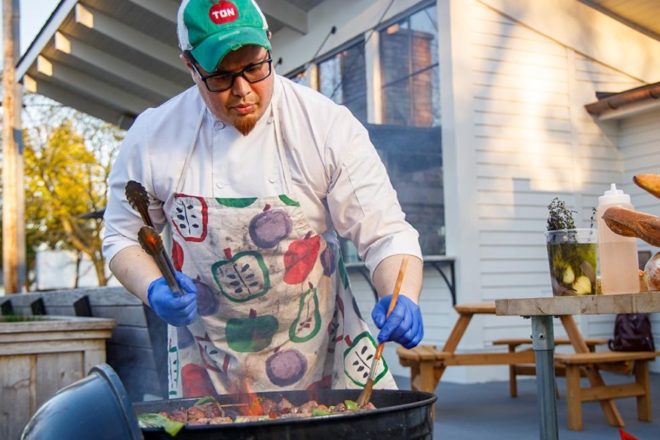 Barringer’s Chef Nick Dawson has turned a challenging situation into an opportunity for diners to take their at-home cookouts to new levels.

Dawson – who has been at the Fish Creek restaurant as the chef de cuisine since it opened its doors in 2016 – had to face some hard challenges this year when the 2020 summer season seemed as though it was going to be nearly derailed by the pandemic. As stay-at-home orders were put in place, the kitchen transitioned to carryout only. Later in the spring, the restaurant moved its dining options outdoors and eventually offered limited, socially distanced indoor dining.

“On a normal summer night,” Dawson said, “We have guests shoulder to shoulder in the dining room.”

Known for their steaks and seafood, Dawson and the Barringer’s staff wanted to find a way to keep providing the highest-quality ingredients to diners, even when they had to operate at limited capacity. Their solution was to create a variety of grill-out packages that are prepared and ready to grill at home.

“It was born out of the chaos of COVID,” Dawson said of the grilling packages. “It was something we could offer right away. We wanted to make sure people could still get good food.”

The packages are put together using Barringer’s select steaks, salmon and burgers, and they come complete with spices and herbs for your protein of choice, bread, butter and three sides: Hasselback baked potatoes with chives and sour cream, shaved jumbo asparagus, and bacon-wrapped onions stuffed with breadcrumbs and a five-cheese blend. There are six protein options – sirloin kabob, ribeye, porterhouse, fillet, salmon and prime burger – that are priced per person or by a group size of four, six or eight (but they can also be sized up).

“I think the largest package we’ve put together so far was for a group of 30,” Dawson said.

He has seen a great response to the packages so far, and he reported a lot of customers trying them around the busy July Fourth holiday.

“We created a package that will give you everything, so you don’t even have to think about the sides.”

On the Barringer’s website, Dawson also shares how to easily get a grill fired up without lighter fluid or a chimney starter, and how to add some spice to your kabobs with a quick marinade recipe.

As a grilling novice myself, I asked which package would be the best for a beginner griller, and he suggested starting with the burgers and graduating to the steak fillets.

“Our half-pound burgers are going to be the easiest – they are very forgiving,” Dawson said. “Even if you overcook those, there will still be a lot of juicy flavor in them.”

Barringer’s is a year-round restaurant, and when I asked whether the plan is to keep offering the grilling packages into the off-season, Dawson said, “I want to keep them on the menu forever. Whenever you want to get together with the family, just call us and order some meat, and you have everything you need.”

To order a grill-out package, call the restaurant at 920.868.5445 a few hours in advance of your estimated pickup time. Find grilling tips and the package options, including an Ultimate Grill-Out Package for 10-12 people, at barringersdoorcounty.com/grill-out-packages.