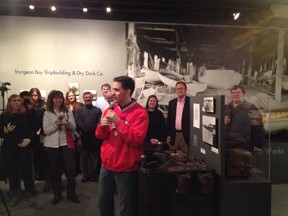 Gov. Walker stopped at the Door County Maritime Museum to say that 2012 was a good year for tourism in Wisconsin. Photo by Matt Ledger.

Gov. Scott Walker stopped at the Door County Maritime Museum on May 3, where he unveiled the state’s 2012 tourism numbers and kicked off National Travel and Tourism week, which runs from May 4 to 12.

According to the Wisconsin Department of Tourism, nearly 97 million people visited Wisconsin last year, and the state’s tourism industry had a total economic impact of $16.8 billion. That’s up five percent from the $16 billion impact reported in 2011.

Walker said the state’s decision to increase tourism-related spending over the past two years, even in the face of tough budgetary times, has paid off with a significant return in investment.

“Anybody who does retail…we know when times are tough that’s the time you’ve got to hunker down and do some more advertising to get people in to your attractions,” said Walker. “It’s paying off with a bigger economic impact and more visitors to the state of Wisconsin. And I’m here today because we understand Door County’s a key part of that.”

Secretary of Tourism Stephanie Klett said the state sees a $6 return for every $1 it spends on tourism. She also said tourism created almost 3,000 new jobs in the state last year.

“A lot of times travel can be looked at as frivolous, because it’s fun. But we are an economic powerhouse,” said Klett.

After his address, Walker fielded questions on a variety of topics. The first was a question about what the governor is doing to address the problems caused by Lake Michigan’s low water level.

Another question asked if the governor would support the expansion of Family Care into Northeastern Wisconsin if the legislature put it in the state budget. Walker said he would have to look at where the money came from.

“If they’re going to raise taxes to put it in, I’m obviously not inclined to do that,” said Walker. “We’ve been willing to do that, there just has to be the money there to do it.”

The governor also talked about some changes to the proposed state budget, the biggest of which is a potential two-year freeze in tuition for the University of Wisconsin system.