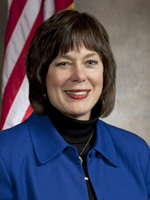 On Nov. 10 Gov. Walker announced the appointment of State Senator Sheila Harsdorf to serve as secretary of the Department of Agriculture, Trade and Consumer Protection (DATCP). Senator Harsdorf will become the first woman in the agency’s 88-year history to serve as its secretary.

“Sheila’s experience as a highly-respected, dedicated legislator and dairy farmer make her an excellent fit to lead DATCP,” Walker said. “I thank Sheila for her hard work and willingness to continue serving the public, and I look forward to working with her to keep Wisconsin moving forward.”

Harsdorf, a Republican from River Falls, has represented the Wisconsin State Senate’s 10th District since 2001 and served in leadership roles including majority caucus chair, chair of the Committee on Universities and Technical Colleges, as a member of the Joint Committee on Finance, and as a member of the Committee on Agriculture, Small Business, and Tourism. She previously represented the 30th Assembly District in the Wisconsin State Assembly from 1989-1998. She holds a degree in Animal Science from the University of Minnesota.

“I am honored to serve as DATCP secretary, and I thank Governor Walker for entrusting me to lead,” said Harsdorf. “I’m excited to work with and support our farmers, businesses, and consumers to promote a fair marketplace and economic growth in Wisconsin’s vibrant agriculture industry.”

Rep. Gallagher officially launched the Northeast Wisconsin (NEW) Battalion and Welcome Home Sponsor Program in Green Bay. The program’s purpose is to provide recently returned servicemen and women in Northeast Wisconsin a sponsor or guide to help eliminate any frustration they encounter upon re-entering civilian life. Sponsors will help guide veterans to the many services and programs that are available to them in Brown County and the state of Wisconsin. Brown County – or the Bravo Company – is the program’s pilot location. If the program enjoys success in Brown County, Rep. Gallagher would like to see other counties in the 8th District adopt the same model. There will be no cost or obligation for veterans to use this program. Sponsors must be veterans to participate. “Having served two back-to-back deployments in Iraq, I know firsthand that the transition from military to civilian life can be difficult,” Gallagher said. “Since being elected, I have had numerous veterans contact me about the difficulty they are having getting re-established into the community. By creating a sponsor relationship between veterans, these recently returned vets will be better equipped to successfully navigate civilian life, and will know where to find the resources that are available to them in Northeast Wisconsin.”

The final fiscal year 2018 National Defense Authorization Act (NDAA) released Nov. 9 by the House-Senate conference committee includes Buy American requirements that Sen. Baldwin fought for in the bipartisan legislation. “I fought for a Buy American policy that supports our manufacturers and our workers, as well as our national and economic security,” she said. “I’m proud to get the job done on this because when American taxpayer money is spent on our military it should be spent buying American products built by our workers. We can now say the NDAA rewards the hard work of American workers.” The legislation also includes measures Senator Baldwin fought for to support Made in Wisconsin manufacturing and shipbuilding. The final NDAA includes full funding for Oshkosh Defense’s Joint Light Tactical Vehicle. “I have worked hard to support manufacturing jobs at Oshkosh Defense and have long pushed to fully fund the procurement of military vehicles made in Wisconsin,” Baldwin said.

While Senator Baldwin included a bipartisan amendment to add $600 million for a second Littoral Combat Ship (LCS) to the Senate-passed NDAA’s original level of one, that was still one ship short of the ideal number of three vessels. The final NDAA includes funding for three ships, which will maintain workforce levels at the shipyard in Marinette and throughout the supply chain across Wisconsin. “I take great pride in representing Wisconsin’s shipbuilding industry because our workers have helped sustain America’s security for generations, boasting a successful history of building ships for our nation’s defense,” Baldwin said. “The LCS program is supported by thousands of skilled workers at the Marinette Marine shipyard and at the 200 suppliers across Wisconsin. This is a big win for Made in Wisconsin shipbuilding.”

Sen. Johnson joined the growing number of Republicans calling on Alabama’s Roy Moore to give up a Senate run if allegations that he pursued relationships with teenage girls decades ago are proven true.

Johnson called the behaviors “intolerable” and “disqualifying,” in a statement.

Moore is the Republican nominee in a special U.S. Senate election in Alabama scheduled to be held next month, in which he faces Democrat Doug Jones. The race is to fill the seat formerly held by Jeff Sessions, who left it to become U.S. Attorney General under President Donald Trump. Moore has denied the allegations made by four women cited in a Washington Post article.

President Trump weighed in on congressional Republicans’ tax-reform efforts, calling for legislation to repeal ObamaCare’s individual mandate and cut the top individual tax rate to 35 percent. “I am proud of the Rep. House & Senate for working so hard on cutting taxes {& reform.} We’re getting close!” Trump tweeted. “Now, how about ending the unfair & highly unpopular Indiv Mandate in OCare & reducing taxes even further? Cut top rate to 35% w/all of the rest going to middle income cuts?” Both the House and Senate bills have top individual tax rates above 35 percent. The House bill would keep the top individual rate at 39.6 percent, while the Senate bill lowers the top rate slightly to 38.5 percent. Achieving both of Trump’s requests could be a challenge for congressional Republicans. While repealing the individual mandate would produce savings, some lawmakers are weary of mixing health care and tax reform. And cutting the top individual rate could be expensive and help to further Democrats’ attacks that Republicans’ tax plans are aimed at helping the rich.