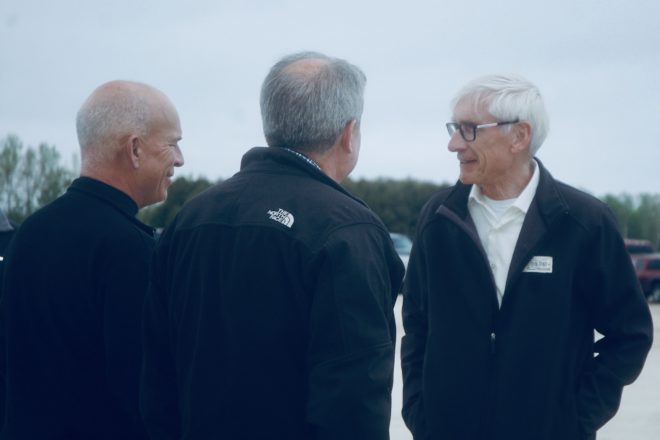 During a visit to the Deer Run Dairy in Kewaunee County May 28, Gov. Tony Evers got to roll in his hand the solids that result from the methane-digester process that has been used on the farm to process cow manure since 2011.

The solids processed through the digester are used as bedding for the farm’s cows, and the liquids are used as nutrients on the 2,500 acres that the owners farm to feed their 1,500 milking cows.

Evers visited Deer Run Dairy to learn more about efforts to use best practices in farming in light of the water-quality challenges that many areas of the state face, and how farmer-led groups such as Peninsula Pride Farms are working to identify and promote these best practices.

Deer Run Dairy is one of four farms in the Door-Kewaunee Watershed Demonstration Farms Network. Augustan Farms, Brey Cycle Farm and Kinnard Farms are the others. These farms test the effectiveness of systems for controlling runoff pollution and allow environmental research agencies and agribusiness to test research and provide technical assistance. They also host popular field days, farm tours and workshops to share what they’ve learned.

Deer Run Dairy is focused on testing low-disturbance manure injection into a growing crop, cover cropping and a denitrifying bioreactor for tile lines.

Rep. Joel Kitchens kicked off the tour by saying that it’s thanks to cooperation at all levels of government and committed farmers that  Kewaunee County is making progress on its water-quality issues.

Evers thanked Kitchens for making the event happen and said, “We know farmers in this part of the state care about clean water as much as anybody else.”

Next was Don Niles, chair of Peninsula Pride Farms, who gave a brief history of how Kewaunee County became “a dairy cow mecca.”

Niles said along with a history of dairy farming, the county has long been plagued by water-quality problems, mentioning a death by typhoid – 150 years ago – of a man in the Town of Lincoln, where his Dairy Dreams farm is located. Typhoid is usually caused by drinking water contaminated with the feces of an infected person.

“We believe very fundamentally that we can have both clean and safe water in this county, and we can have a thriving agricultural community,” Niles said about the three-year-old Peninsula Pride Farms organization. “That was the formative vision we all had as a group.”

Niles said the organization is looking to Madison for bipartisan support to help attain those goals.

Evers smiled as he said, “It’s the only way we’re going to get it done.”

Deer Run co-owners Duane Ducat and Dale Bogart then led the governor on the tour, and Evers spent an unusual amount of time picking their brains. Ducat pointed out that even though they are a concentrated animal feeding operation (CAFO), they are also a family farm, with three nephews, his son and a brother all working the farm.

Ducat said he’s been on the farm since 1983, and once he teamed up with Bogart, they talked about becoming as modern of an operation as possible.

“We’ve always been concerned with water quality here,” he said.

Ducat said once they stepped up production, they could look into digesters – and they haven’t looked back.

“It generates enough methane gas to run a 600Kw generator, which is enough power for about 600 homes,” he said. “It also greatly reduces the odor in manure.” He added that his neighbors especially appreciate the second result of digested manure.

Dale Bogart mentioned another major benefit of the digester: it reduces pathogens in the liquid nutrient a thousandfold.

The governor and others on the tour then got on a bus for a short ride to a field where rye had been planted as a cover crop. Nick Guillette of Ag Source Laboratories and Barry Bubolz, a soil conservationist with the USDA’s Natural Resources Conservation Service, talked about the many benefits of cover crops, including improving soil health and preventing soil erosion.

Guillette yanked a clump of winter rye from the ground with a chunk of soil attached and talked about how good it looked, with the plants helping to prevent compaction and adding to the organic matter of the soil. The governor grabbed a clump of his own and worked the rich soil in his hands.

Throughout the tour, Gov. Evers was engaged, had pertinent questions and was not afraid to get his hands dirty. In his parting words, he said that although there will always be points of contention in Madison, the issues being addressed by Peninsula Pride Farms are common-sense ones that should find bipartisan support.

“Looking forward to being of help,” Evers said.