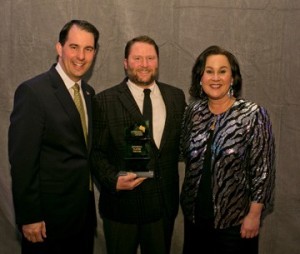 I chit chatted with Kelsey about the honor, the season ahead, and what sets Peninsula Players Theatre a part from other Wisconsin theater companies.

Sally Slattery (SS): How does it feel to be the recipient of the 2014 Arts, Culture and Heritage Award for Tourism Excellence?

Brian Kelsey (BK): It is a great honor to have been recognized by the Governor and the tourism industry as the 2014 Arts, Culture and Heritage Award for Tourism Excellence! Greg Vinkler, the Players Artistic Director summed it up best:

“The Peninsula Players is extremely honored to be awarded this distinction. We are very proud and happy to play a part in Wisconsin’s tourism industry, and especially delighted in being an ongoing participant in Door County’s rich history. I would also add that the entire company of Peninsula Players, both past and present, shares this award. It takes a fully collaborative effort to maintain the special heritage of this grand summer theater, and we are extremely grateful for all those performers, designers, technicians, directors, administrators, volunteers, members of the board of directors, donors and patrons who have returned season after season since 1935 to support Door County’s first professional theatrical troupe.”

In addition to Greg’s sentiments, I would like to add that Peninsula Players was nominated with several other awe inspiring organizations and is thrilled to be honored as a culture treasure and arts ambassador, not only for Door County but for the entire state. Cultural tourism is a crucial piece of the industry driving significant economic impact into individual communities as well as the state as a whole. We are very thankful for all of the local businesses, residents and the many tourists who have supported our organization over the past 79 years.

SS: Tell us about your experience at the Governor’s Conference on Tourism.

BK: The Governor’s Conference on Tourism is always a highlight in the winter season for me. As a member of the Governor’s Council on Tourism for the past seven years I have been fortunate to have had an insider’s perspective on what it takes to put together the largest state tourism conference in the nation.

A key highlight this year would be the celebration of the Wisconsin Arts Board’s 40th Anniversary. As part of the yearlong festivities a cultural track was added to the conference and keynote speakers came from the arts industry. Because of this, the state looked for keynote speakers who could address the importance of the arts in both tourism and in our own lives.

Eric Whitacre, creator of the Virtual Choir, shared the importance of how the arts act as a catalyst to bring people from all over the world together. It was a perfect example of the power of collaboration. On Tuesday morning, Robert Lynch, President and CEO of Americans for the Arts, the national organization dedicated to advancing the arts and arts education in people’s lives, schools and communities, spoke on his personal mission to empower communities and leaders to advance arts and arts appreciation in society. He also spoke on the enormous economic impact the arts play in the tourism industry.

As a board member of the Wisconsin Arts Board it was rewarding to see these two speakers communicate the great importance of the arts in our economy and more importantly our daily lives. These messages echo the sentiments of the Greg and me as seen in both the collaborative nature of our business and ultimately the role our organization has played in the economy of Door County and Wisconsin as a whole.

BK:  I would have to say the enormous amount of collaboration which occurs at the theatre coupled with the long tenure of staff as members of the company. Greg Vinkler, Players Artistic Director, is beginning his 26th season with the Players! He has put his heart and soul into this organization and it not only shows on stage, but in the overall culture of the company.

Scott Boyle, Players Technical Director, is beginning his 18th season with the Players and knows exactly what it takes to build the sets required of our productions. That is a crucial element when his team has only a few weeks to create the scenic beauty of patrons experience in our productions. In addition to these key staff we have numerous other actors, designers, etc. who have returned to the Players year after year as it has become their second home…their home “up by the bay.”

Any key element of what sets us apart is the family environment. Nearly all company members live on the property which creates a camp environment. In order for this to work to well we look for “good campers” when staffing the season. These individuals live together, eat together, work together…ultimately, they share their lives, sometimes for over 20 weeks! Because of this they understand they need to work together and rely on one another. Conflicts cannot go unresolved…collaboration crucial. Company members understand the importance of lending a helping hand when their work is completed yet another department is in need of support. They collaborate, as I mentioned above. That is one of the key success factors in our organization…it is part of our DNA…it is why company members return year after year and ultimately it has led to two mantras which adorn company apparel… “Once a Player, Always a Player” and “Love and Be Loved.” You can’t put a value to that feeling/sentiment. Either an organization has it or it doesn’t. I’m proud to say that we have had it for 79 years.

There is so much more which sets us apart from other Wisconsin theatre companies that I haven’t mentioned…we are a true original and that is due to the many people who have worked at the Peninsula Players over the past 79 seasons!

SS: What are you most looking forward to in the upcoming season?

BK: That is a hard question…I am looking forward to so many things! I am looking forward to everyone returning to the Players property! It was always so nice when we get back into our offices with the view of the shoreline, the sound of phones ringing with happy patrons excited to come see a show and the opportunity to work face to face with fellow team members. During the winter months we move our operations into our individual homes whether they are in Door County, Superior, or Chicago.

I am looking forward to the incredible season that Greg has put together. The productions he has chosen to showcase this year will be truly exceptional and will take our patrons on a ride through different eras, countries and mindsets! I’m excited to see the Beer Garden full of patrons enjoying a picnic dinner or drink enjoying the setting sun as they settle in for the “Players Experience.” I’m excited to meet our 10 new interns who will experience the Players for the very first time! Seeing the enthusiasm they bring is truly electric and empowering to the entire organization. I’m looking forward to seeing my “friends” who have been Players family members for years as they return to share their art with our company and patrons. Honestly…there is so much I am looking forward to this season as in every season. The Peninsula Players is a very special place and I am honored to call it home.

For more information about Peninsula Players and their upcoming season, visit peninsulaplayers.com.