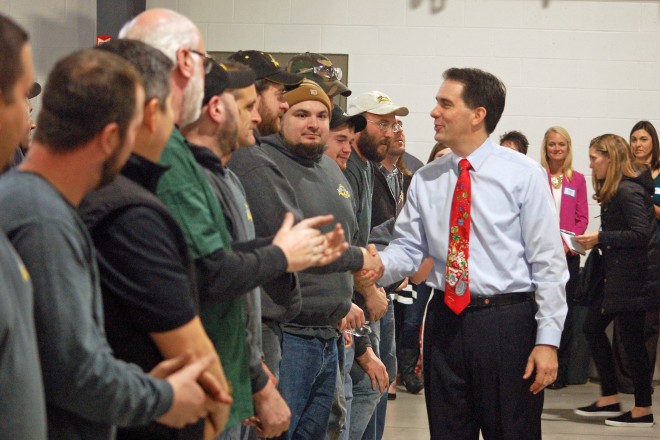 Gov. Scott Walker shakes hands with Pro Products employees after his talk at the business in the Sturgeon Bay Industrial Park on Dec. 18. Photo by Jim Lundstrom.

Bedecked in a festive red tie, Gov. Scott Walker regaled employees of Pro Products in Sturgeon Bay’s industrial park and about 100 invited guests with seasonal bonhomie and good news about the state’s employment picture on Dec. 18, the day after new numbers were released that put Wisconsin’s unemployment rate at 4.2 percent.

Walker pointed out the numbers haven’t been that low since March 2001.

He also touted the adjusted numbers for the month of October. “There are 16,600 new private sector jobs in the State of Wisconsin in that one month alone. That is the biggest month-to-month job increase that we’ve had since, get this, 1992. That’s so far back, that’s the last time a Clinton or Bush were running for president and it was not the Clinton or Bush running now.”

Walker’s speech was preceded by a brief rundown of Pro Products growth by owner Steven Hurley, followed by the introduction of the governor by Hurley’s brother and business co-owner Jon Hurley.

Steven explained that the precision machining company moved into its new 40,000-square-foot building in the Sturgeon Bay Industrial Park earlier this year, investing more than $4 million in the plant and equipment, and hiring eight new employees.

“Through investment and careful planning, whether it be hiring new people, or buying a new piece of equipment, we believe we are well positioned for the future, ready to continue growing and move forward,” Hurley said. 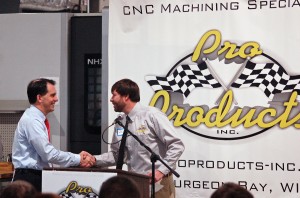 The company is seeking new employees, and with the help of the state’s Wisconsin Fast Forward grant program through the Department of Workforce Development, is able to train employees on site (learn more about employment here, proproducts-inc.com).

Walker said Pro Products demonstrates the challenge the state has.

Walker said while working with the Legislature in the past year, the focus has been “giving you the tools to create more jobs and opportunities.”

Walker said that is done by supporting apprenticeship programs in key industries, getting more school districts to offer dual enrollments in secondary and tech school, and more investment in technical schools.

The Governor suggested that the only discontent with recent policy changes to the state’s FoodShare program came from that bastion of liberalism, Madison. 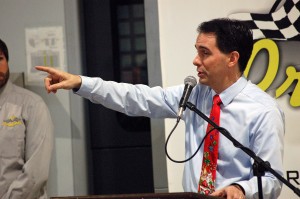 “Working with the Legislature, one of the things we’ve done that got a little bit of attention in Madison, they kind of grumbled about in Madison, but I think the rest of the state by and large likes it, and that is, we say, if you are an adult in this state and you don’t have a kid but you are physically able to work, we’ll help you if you’re down and out, but we expect something in return. If you want something like food stamps in our state now, we’ll help you out, but we expect something in return, you sign up for one of our job training programs and you stay in that program and you look for work every day of the work week and you’re able to pass a drug test. You do all those things, and we’ll help you out. The people down in Madison, some of them were complained and grumbled and said, ‘Oh you’re making it harder to get government assistance.’ I said, ‘No I’m not. We’re making it easier to get a job.’ Isn’t that what this is really all about?”