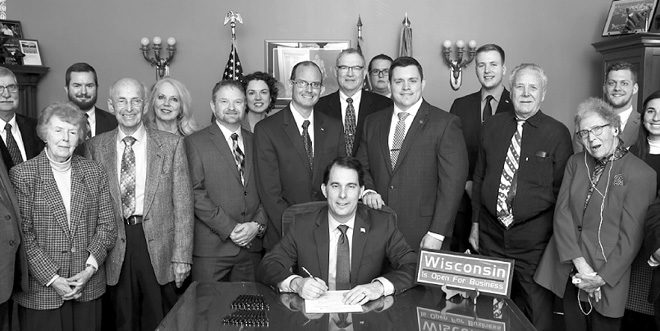 Gov. Scott Walker prepares to sign a bill legalizing hemp farming in Wisconsin on Nov. 28 surrounded by lawmakers and supporters of the measure, including Paul Mahlberg of Baileys Harbor (third from left, front row) at the state Capitol in Madison. Submitted.

In these politically divisive times, it is unusual to see a unanimous vote on anything. However, the industrial hemp bill that was signed by Gov. Walker on Nov. 28 passed unanimously in both houses – 33-0 in the Senate on Nov. 7 and 92-0 in the Assembly on Nov. 9.

Dr. Paul Mahlberg, who lives near Kangaroo Lake in Baileys Harbor and was one of a number of industrial hemp advocates who attended Walker’s signing of the bill, praised the bill.

“We’re going to find that hemp is going to become a very important crop in Wisconsin,” he said.

Mahlberg is a professor emeritus of botany at Indiana University, where he spent a 33-year career studying cannabis. He obtained one of only two Drug Enforcement Administration Schedule 1 research licenses to study the plant from 1970 through 2003. He has long been an advocate for the revision of U.S. laws to allow for the agro-industrial development of hemp. China is the current leader in hemp production.

The door to industrial hemp was opened by the 2014 Farm Bill, which was the first time the federal government distinguished the difference between industrial hemp and marijuana. Legislators realized that instead of importing a half-billion dollars worth of hemp products annually, American farmers could produce hemp here for the first time since World War II.

“I think there will be some farmers that will be ready to try it. Any time there are alternatives for farmers is a good thing,” said Rick Adamski, a farmer in Seymour who represents district 8 for the Wisconsin Farmers Union, which includes Door and Kewaunee counties.

Adamski said the Wisconsin Farmers Union supported the legislation and will now help spread the word to farmers about the potentials for this new crop.

“There are many uses for industrial hemp,” he said. “One feature that’s not often brought up, we talk about the fiber and oil from the seed, but industrial hemp has some soil-building properties that I’m particularly interested in.”

Mahlberg said the next step for the state is to designate a program administrator and establish the process for everything from obtaining seeds to conducting background checks (despite establishing the difference between hemp and marijuana, potential hemp farmers cannot have any drug infractions on their records).

“They hope to accomplish this sometime in winter still and into spring,” Mahlberg said. “Will anyone be growing hemp in the spring of next year? It depends on how things go in setting up the rules and regulations.”

Mahlberg said he hasn’t heard about any peninsula farmers who are itching to grow hemp, as it will depend on whether they can make money on the crop.

According to the National Conference of State Legislatures, Wisconsin was just one of 38 states and Puerto Rico considering industrial hemp legislation this year, ranging from clarification of existing law to brand-new legislation such as Wisconsin’s. The legislation advanced in every state except Arizona and New Mexico, where those governors vetoed hemp legislation. A state judge later invalidated the New Mexico veto.