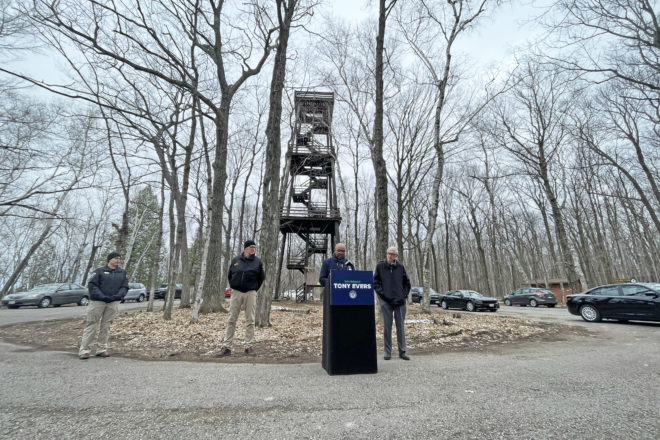 Backed by the closed Potawatomi State Park Observation Tower, Gov. Tony Evers announced Monday the selection of the company that would draw up concept designs to either revitalize the historical structure as it stands, or break it down and start over.

“The Department of Administration has selected GRAEF to put forth design options for the tower for the local community to weigh in on and select the best design for the community moving forward,” Evers said. “Because of these actions that we’ve taken to assure the historic character of the tower is preserved while expanding accessibility to all visitors, I will be including this project in my 2023-25 capital budget proposal.”

Joining Evers behind the makeshift podium covered with the broadcast microphones of local media was Department of Natural Resources (DNR) Secretary Preston Cole. He reiterated the DNR’s commitment to getting the project done, but not without ADA (Americans with Disabilities Act) accessibility, inclusivity and equitable access for all.

“This isn’t our first experience dealing with park infrastructure that reflects on an exclusionary built environment of our past,” Cole said.

He referred to Eagle Tower in Peninsula State Park as an “impressive example of the future of accessible, open outdoor spaces” for everyone.

“That’s a big deal, folks: an outdoors for all,” he said.

The Department of Administration (DOA) solicited bids for the development of two concept plans with detailed cost estimates for each. The first concept will provide a historical restoration of the tower as it stands, the second a plan for reconstructing the tower with new materials reflective of the tower’s historical character.

The other firms that bid on the job in addition to Madison-based GRAEF were Ayres Associates of Ashwaubenon, Parkitecture + Planning of Madison, Stantec Consulting Services of Cottage Grove, Ziad Salameh (ZSLLC) of Milwaukee, and Architectural Resources Group of Milwaukee, according to the DOA’s A/E (architect and engineer) Selection website.

The state deemed the tower unsafe in late 2017, closed it to the public in 2018 and announced in 2020 that it would be demolished.

“There was no plan to replace it,” Evers said. “Since then, the tower has received an outcry of support.”

Support has come during the past two years in the form of letters from all major stakeholders, including the City of Sturgeon Bay and County of Door; the assessment of the tower paid for and conducted by the Sturgeon Bay Historical Society Foundation (SBHSF); and that group’s successful campaign to get the tower listed on both the state and national Registers of Historic Places. The DNR then held a public-comment period earlier this year about what to do with the tower. Of the 361 people who commented, 353 supported the tower.

The job GRAEF has been awarded calls for 10% concept plans. When asked what that means, the DNR’s Missy Vanlanduyt, who was also at the press conference, said that all DOA projects begin with 10% concept plans. Once received, those plans will be vetted and made available for public feedback.

“The next phase goes to 35%, at which point, if it’s in the governor’s budget, it will then go to the State Building Commission, and from there it will go to 100%,” she said. “That’s standard DOA process.”

The concept plans aren’t due until December. SBHSF representatives, with whom Evers spoke after the press conference, implored the governor to do something to stabilize the tower this year while GRAEF is working on the concept drawings.

“There are some maintenance things that can be done that would get us through this year,” SBHSF member Christie Weber said. “Until that happens, every storm, it’s [the tower] getting worse.”

“We can talk to GRAEF about that,” Evers responded.

When several others also expressed concern that the tower would fall down before something was done, Evers said, “We need to get some experts ready to take a look at this to see what kind of preservation can be done to make sure it doesn’t fall down, and we’ll just take it from there.”

Both restoration of the existing structure and a rebuild of an entirely new tower are both on the table. Although Evers said he didn’t have a preference – “I personally am not getting behind a specific proposal; I just want to get this done,” he said – the DNR emphasized that the accessibility component would be critical.

“Regardless of whether we’re looking at more of a restoration or more of a new rebuild, there will be an accessible-access component,” said Sean Kennedy, DNR liaison, after the press conference.

The governor’s visit, announced the evening before his arrival, came on the heels of a press release issued Friday by Rebecca Kleefisch, a former lieutenant governor and a Republican gubernatorial candidate vying with a field of others to challenge Evers in November. She said if the tower were not fixed and she were elected governor, she would “immediately begin the process of approving the repairs.”

Rep. Joel Kitchens (R-Sturgeon Bay), who has been an advocate for the tower’s repair and who attended the press conference, said he didn’t hear what he wanted to hear from the governor.

“I would have loved for him to have said, ‘We’re going to fix the tower the way it is; we’ll stabilize it; then we’ll worry about what to do to make it accessible after that,” Kitchens said.

He also predicted that the governor’s budget would contain an expensive proposal that would not survive the legislature.

“If they put $5 million in the budget, no way it’s going to stay in the budget,” Kitchens said. “We already have one up the road [Eagle Tower] that cost $4 million. It’s just not going to happen. And that’s not what people are asking for. People just want it fixed. And they can do that for $250,000, so just fix it. If you can make it accessible, great, but it’s a historic structure. They have a legal obligation to fix it.”

State Sen. André Jacque (R-De Pere) did not attend the press conference but issued a statement saying the governor continued to deploy a strategy of “stall and blame to get past the election, and avoid doing a historical project that the Evers administration has demonstrated time and time again that it has no interest in doing.”