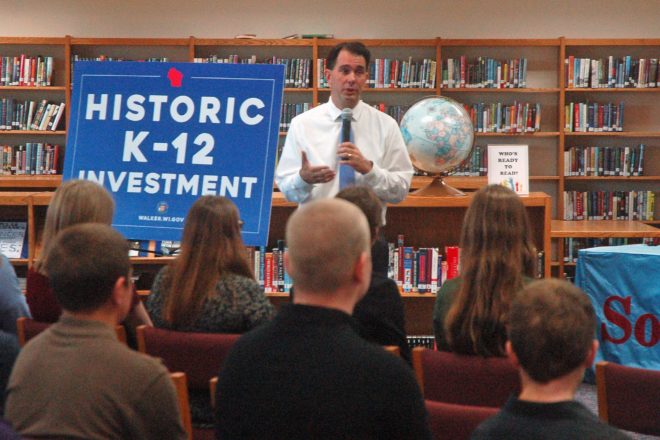 Gov. Scott Walker not only got a tour of the fabrication laboratory (or fab lab) at Southern Door High School when he visited on the second day of the 2017-18 school year on Sept. 6, but he also received an engraved glass commemorating his visit and designed by fab lab student Hayley Shimon.

The Governor was joined on the tour by two members of the Southern Door School Board – Polly Alberts and Jamie Schmiling – as well as Door County Economic Development Executive Director Caleb Frostman and several DCEDC board members, including Chair Mike Baudhuin of WireTech Fabricators.

Last April Southern Door was recognized as one of 21 schools in the state to be awarded a grant for its fab lab from the Wisconsin Economic Development Corp. (WEDC), which had $500,000 to disperse. The state began funding public school fab labs through WEDC in 2016. 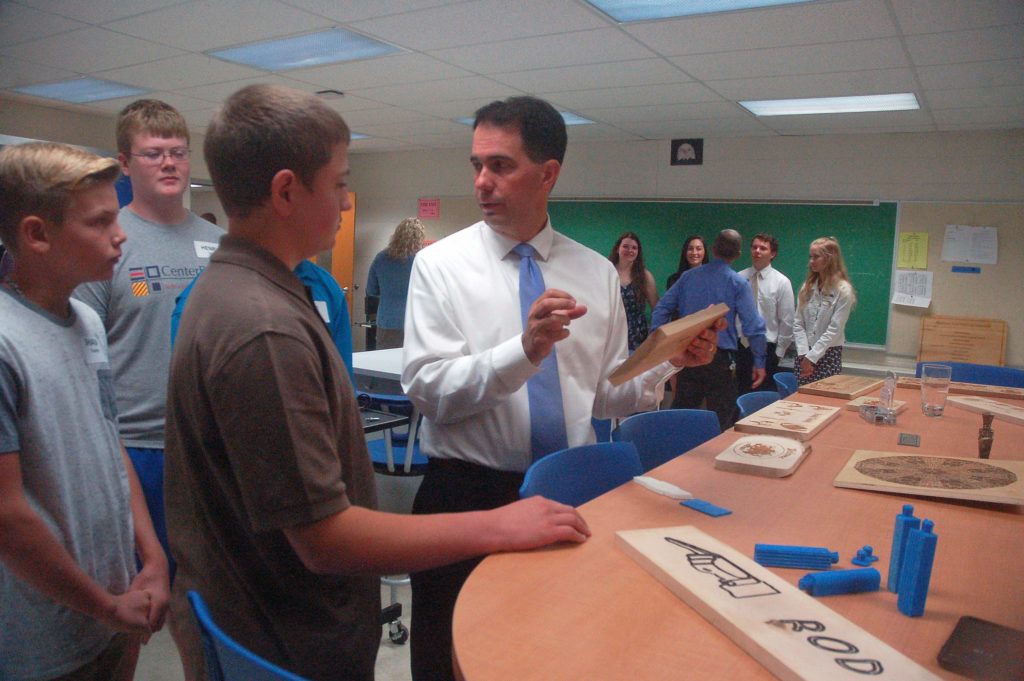 Fab labs are seen as a bridge between schools and the local manufacturing community in that they introduce students to 21st century manufacturing equipment such as 3-D printers and laser engravers.

“This,” said Southern Door High School Principal Steve Bousley in introducing fab lab students to the Governor, “is the next generation of eager manufacturers.”

Bousley explained that at this time last year, the fab lab was merely a shell.

“We are about 90 percent complete,” he said.

Bousley said when the grant was awarded that the school took the very deliberate step of building the fab lab program with the intention of creating young people who are better prepared to enter the workforce or higher education, depending on their own goals.

Awaiting installation is an 80-inch screen that will be used for telecommunication with other fab labs around the country.

The WEDC grant included the stipulation that the fab lab also be open to entrepreneurs in the community.

“This is where you can really take an idea and make it a reality,” he said.

Jerry Bronkhorst, one of the fab lab instructors, explained to Walker the variety of skills students garner by taking a concept in their head and bringing it to life with a 3-D printer. He said to learn how modern manufacturing is done, each student will make one component for an item, and then all those individual components will be fitted together to make the finished product. Besides all the skills they will need to complete their individual projects, they also learn about teamwork, because if someone is slow in delivering one piece of the puzzle, that holds the whole works up.

“There is a whole slew of different skill sets he will get,” Bronkhorst said.

The Governor spent time talking with the students and looking at some of the engraving work they have done, and was impressed by their enthusiasm. After the tour, the Governor spoke to a group of students in the school library about his own education and how he benefitted from a high school class he didn’t want to take – typing. But once in college and then in government, the ability to type was much needed and welcome. His message – pay attention and enjoy because school days soon end.