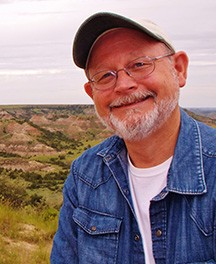 As Krueger’s novel Ordinary Grace has been selected for this year’s Door County Big Read, the author is coming to Sturgeon Bay to talk about his book. This will not be the first visit to Door County for the St. Paul-based author, as he and his wife vacationed on the peninsula when their children were young, and more recently, he attended a mystery writers conference here.

While Krueger certainly does not proselytize in his novels, each has a spiritual component, but in an interdenominational sense. He does not characterize himself as a religious person, but nonetheless attends a Methodist Church; the father in Ordinary Grace, Nathan Drum, is a Methodist minister. The private investigator protagonist in his Cork O’Connor series is Catholic. And a number of the Ojibwe Native Americans in those novels follow their native spiritual traditions.

Those who have read Ordinary Grace know that it is a coming-of-age story told by Frank Drum looking back to 1961 when he was a 13-year-old in New Bremen, Minnesota; his opening sentence: “All the dying that summer began with the death of a child . . . killed on the railroad tracks.” The modest lifestyle of the Drum family in this tale contrasts with the wealthy means of the Brandt family, causing tension as their lives intertwine and secrets are revealed.

Some readers might find that Nathan Drum reminds them of Atticus Finch in To Kill a Mockingbird. Krueger believes “there are heroes in this world whose courageous words and actions show the rest of us the way. In the same way that Finch is a classic hero, and can seem too good to be true, Nathan Drum verges on the too-good-to-be-true,” one of the ideals that great literature offers us, he explains.

And like the narrator, Scout, who looks back on her childhood with an adult perspective, Krueger’s narrator Frank does the same. Both have experienced a spiritual life journey. 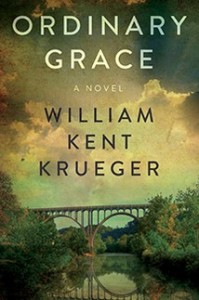 Krueger evoked a time and setting from his own past when he developed the plot of his story. His father, after becoming disenchanted with his employment at an oil company, returned to his career as a high school English teacher, taking a position in Hood River, Oregon, the basis for the fictional small town in the novel.

The resulting story of Ordinary Grace has captured the imagination of its readers. This Tender Land, a companion to Ordinary Grace but not a sequel, is now in a first draft and will be published in 2016.

Readers of Ordinary Grace who have enjoyed this introduction to Krueger’s fiction will want to sample the Cork O’Connor mystery series that together comprise a 12-year saga in the O’Connor family. Cork is a retired sheriff turned private investigator whose personality has been shaped by his combined Irish and Ojibwe heritage.

Krueger views Cork as a Holden Caulfield sort of character, “a bit on the outside, a man who wants to be the person that stands between innocent children and the cliff they might fall off, an outsider doing his best to save them.” At the same time, “I see Cork like Odysseus,” he adds, “a flawed character who sometimes makes assumptions that are not always correct. He’s very human!”

Fans of the Cork novels might think Krueger has Native American ancestry, but “I’m a white guy!” he laughs. He was inspired by the possibilities explored by Tony Hillerman in his series of crime novels set on Navajo land.

Informed by his studies in cultural anthropology, Krueger recognized the fictional potential of the indigenous Ojibwe population in northern Minnesota, an area with which he had gained familiarity from vacations. He read voraciously about the Ojibwe culture for better understanding, and the result, a series of best-selling novels.

One testament to his success in dealing with a fictionalized Ojibwe culture is the fact that Windigo Island, his latest Cork novel, was written at the request of Ojibwe people who wanted him to raise public awareness to the problem of human trafficking with native girls.

Krueger will speak at Crossroads at Big Creek on Feb. 5 at 7 pm. Perhaps the audience will hear about when the author was booted out of Stanford University for his part in the antiwar protest that culminated in taking over the president’s office, or maybe about his gypsy-like family living in 11 different homes in eight different cities in six different states by the time young Krueger had graduated from high school.

As a novelist, Krueger proclaims himself primarily a storyteller; those who attend his talk will enjoy those stories.