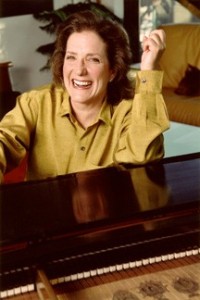 “I’m at the piano everyday,” says Julie Gold. She will perform at the SDCA on Jan. 25. Photo by Bruce Johnson.

Believe me, you’ve heard this song; the world has heard this song. Nanci Griffith, The Byrds, Cliff Richard, and perhaps most famously, Bette Midler, covered “From a Distance.” The song was also performed in English, French, German, and Spanish at the Atlanta Summer Olympics in 1996.

“I still get emails from people who say that song was there or helped them when they served in war, when their father died, when their son was born,” says Julie Gold, who penned the lyrics and composed the music for “From a Distance” almost thirty years ago. The Grammy Award-winning songwriter will perform at Southern Door Community Auditorium in Brussels on Jan. 25 at 7 pm.

Fifty-seven-year-old Gold speaks over the phone from her New York City apartment after a morning of practicing her instrument of choice – the piano. “I’m at the piano every day,” says Gold. “It keeps my fingers limber, in touch with the keys. I practice whole-heartedly everyday.”

Gold was introduced to the piano in first grade. “I remember loving, loving, loving all things music,” she says, adding, “Music came naturally to me. I remember listening to music when I was in my formative years and having a revelation – I realized the songs effected me, they were pleasing, whether Mary Poppins or Motown or The Beatles. I wondered, ‘Where does this come from?’ Then I realized somebody wrote them. So I started trying.”

Though her parents were not musicians, “My parents had musical souls,” says Gold. “They didn’t have talent per se, but it was important that both my brother and I learn a musical instrument. It was very important for her that people play an instrument, when I would have friends over she would always ask if they played something.”

In 1978, Gold left her hometown of Philadelphia and moved to New York City. “New York has this mystique. That’s where I wanted to be,” she says. “At the time I was in my early 20s and had hopes of a record deal but that never solidified. I struggled for a very long time.”

To pay the bills, Gold worked as a secretary at HBO and played “anywhere there was a piano at night,” she recalls. “That’s where I made my friends – most of whom are still my friends and we’ve had varying degrees of success.” A few of these friends include Shawn Colvin, Christine Lavin, David Wilcox, and Mary Chapin Carpenter.

In 1985 she scribbled the lines of “From a Distance,” a song about peace and hope: “From a distance you look like my friend, even though we are at war. From a distance I just cannot comprehend what all this fighting is for.”

“That song gave me credibility as a songwriter,” says Gold. “You often get a skeptical response when you say, ‘I’m a songwriter.’ But when I say I wrote “From a Distance,” they say, ‘You wrote that!’”

The song also granted Gold the opportunity to meet many of her idols, including Paul McCartney and Bonnie Raitt. “I have a lot of great stories,” she says. “Cyndi Lauper came over in the ‘90s, she kissed my tortoise and I had to wipe all that lipstick off.”

Gold continues to write, continues to perform, and finds inspiration “from just living, being in a beautiful world with many shades; shades of happiness, sadness, loss and gain.”

Tickets are $10. For tickets or more information visit southerndoorauditorium.org or call 920.493.5979.