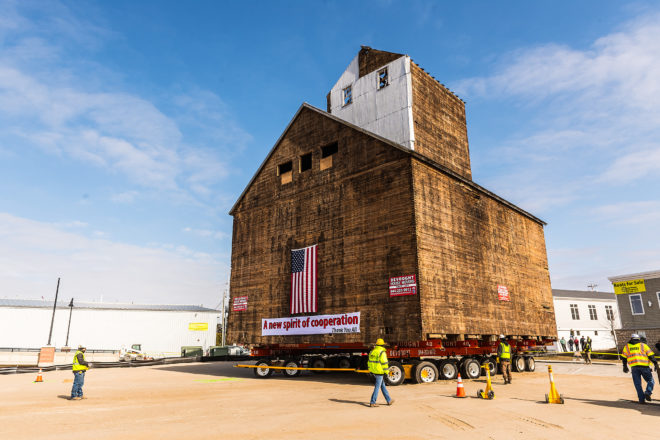 The granary found its new home on the east side of the bay, on a vacant parcel across the street from the Frozen Spoon.

The granary building may be taking another trip over the Maple to Oregon Street bridge in Sturgeon Bay.

At its Tuesday, Nov. 20 meeting, Sturgeon Bay’s Common Council will consider a request to move the building back to its original location on the city’s west waterfront.

The request from alderpersons Catarozoli and Avenson asks that the Common Council allow the grain elevator to be moved by the Sturgeon Bay Historical Society back to its original location on the original foundation and pilings at no cost to the city.

City Planner Marty Olejniczak recommended that city staff or the Common Council work with the historical society to answer a laundry list of questions before making any definitive decisions.

Those questions include who would own the land, how it would impact the Ad Hoc West Waterfront Planning Committee’s work, and what type of use is planned for the structure, among others.

The Granary was bought by the Sturgeon Bay Historical Society to save it from the wrecking ball last spring, and moved across the bridge to much fanfare March 29.