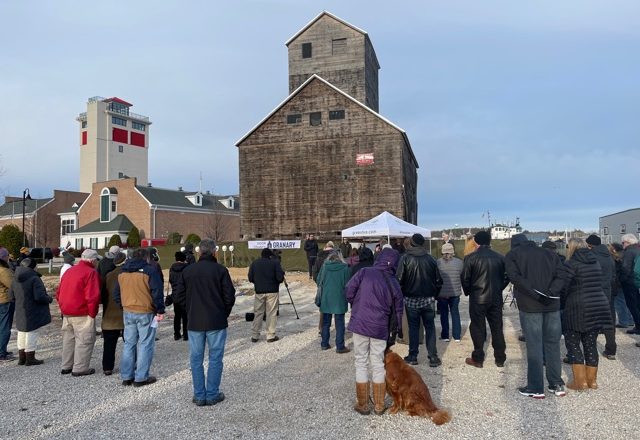 After four years, two moves and many twists and turns, the Door County Granary project is underway.

A groundbreaking ceremony held Friday at the 92 E. Maple St. site signaled the start of the first phase of construction. Pilings will be driven, the foundation poured and then the structure jacked up and moved about 50 feet to its final base. Other work during this phase includes a new exterior skin, and for the top, translucent panels. A grand opening of this first phase will be held by June 1, 2022, said Christie Weber, president of the Sturgeon Bay Historical Society Foundation.

“We get started building today together, and we make this amazing vision of restoring the historic Teweles & Brandeis grain elevator into a unique community center and museum for the public as the Door County Granary comes true,” Weber said. “We still have a long way to go, but when we look at where we’ve come from over the past four years with reversing a teardown, being homeless, returning home, flooding waters and a world pandemic, well, the next four years look like a party.”

The Teweles & Brandeis grain elevator crossed the Maple-Oregon Street Bridge on March 29, 2018, to arrive at its current West Waterfront home.

The 120-year-old building earned a listing on both the National and State Registers of Historic Places for the role it played in agricultural shipping. Its location in a protected harbor along a navigable waterway serviced the farm families that had cleared their wooded property and cultivated productive farm fields.

“We are fortunate to have it and to be able to repurpose [it] as a testament to our agricultural history and a resource for our community,” said Beth Renstrom, executive director for the project, during Friday’s ceremony.

Those who spoke on Friday included Renstrom, Weber, Jim Janning of the project’s fundraising committee, the architect, engineer, construction manager and Sturgeon Bay Mayor David Ward. All gave thanks to numerous people for their efforts, donations and volunteer activities, no matter how small or large. Janning gave a special nod to what he called the “magnificent seven” for their tenacity, courage and hard work.

“There was a group of people in the very beginning, when this was in its darkest hour, who stayed active and worked very, very hard to make all this happen,” he said. “Christie Weber, Laurel Hauser, Kelly Catarozoli, Dan Collins, Nancy Aten, Barbara Allman and Kelly Avenson.”

The rockiness and turmoil and fight it took to get to this phase was left in the past Friday as the reconstruction of the historic building moved forward.

“Even when there’s a river of differences between us, our community can always build bridges between us, old and new, together,” Weber said. “And that seems to be as rare as a wooden grain elevator is today and worth celebrating together.”

Fundraising for the project is ongoing.