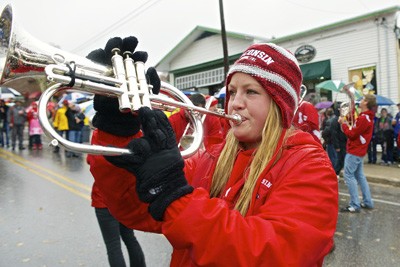 At age 95, long-time Sister Bay resident Lester Berns likely remembers as many of the town’s fall festivals as anyone. He and his brother, Robert, started a lumberyard there in 1941, returned to the business after four years in service during World War II and operated it until 1970. When they came back to their hometown in 1945, they joined an active group of local businessmen that included:

• Al Johnson, whose restaurant in those days occupied a little frame building that served mostly hamburgers. (Not a lingonberry in sight.);

• Jerry Burress, an employee in the general store owned by the Berns’ uncle, Bill Bunda;

• Winky Larson, who owned the ski hill where Little Sweden is now located and was married to Audrey Bunda, Bill’s daughter;

• Clyde Casperson, who came back from the war and took over the funeral home his parents had founded in 1921;

• Bill Bastian, who worked for the Bern Brothers Lumber Company;

• Richard Wilke, who owned a furniture store across from the present Al Johnson’s’

• Emma Husby, who offered lodging, food and drink at the present Husby’s location; and

• John Witalison, whose grocery store stood at the base of the Sister Bay Hill.

Berns remembers all these long-ago business people being involved in the early autumn celebrations, beginning in 1945, but he is sure that it was he who coined the term, Fall Festival.

It is common today to credit the end of the tourist season with the beginning of festivals in Door County, but Berns insists that in the mid-1940s (when there were, after all, few tourists) the first festivals in Sister Bay – now known as the granddaddy of all the county celebrations – was started strictly to benefit the business community.

“John Kopitzke published the Door Reminder shopper in Ellison Bay,” Berns recalls, “and he was almost like a member of the Sister Bay business community. He really helped us with the promotion of the early fall festivals.

“Of course, they weren’t anywhere as ambitious as the ones held today. We had not thought of drawing huge crowds of people. The first festivals were just little, local shopping events to get people to town for special sales in all the stores – a way to bring the community together. I remember there was always music, and the street was jammed with people.”

Winky’s son, Mitch Larson, owner of the On Deck clothing stores, remembers the festivals of his childhood as a very special time of year with parades, soap box derbies and carnival rides on the waterfront behind the post office. 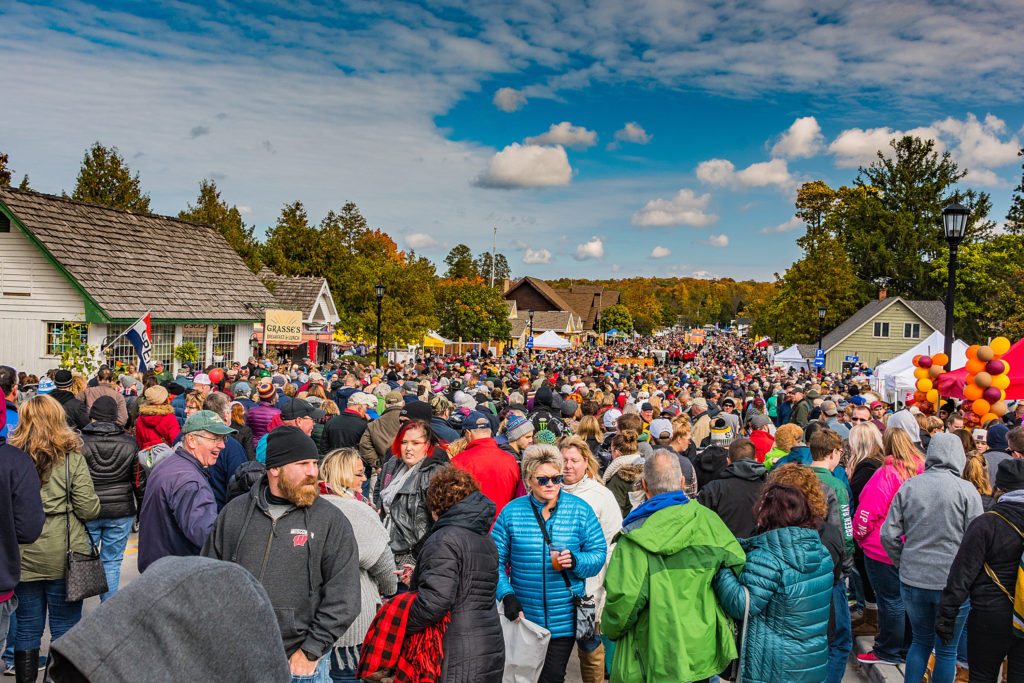 The sea of people that vist on Sister Bay for Fall Fest in October makes for a great audience for arts and crafts vendors, but space for the fair is limited. Photo by Len Villano.

“One of my favorite memories,” he says, “is how Bill Bastian would take one of the trucks from the lumber yard, get a load of corn stalks from a farmer and recruit a bunch of us kids to help him tie them to all the telephone poles in town. Another highlight was the annual auction on the sidewalk in front of the Bowl. Jake Kodanko was always the auctioneer.”

Lars Johnson, the current co-owner of Al Johnson’s, remembers that the festival committee would hire someone to paint all the business windows, that they all had raffle boxes and that the Women’s Club organized cake walks, a big favorite with kids. “The nonprofit organizations deserve so much credit,” he says, “for making it what it is today. The plays the Lions Club put on in the village hall were wonderful.” The cake walks have continued and, like most of the festival activities, are sponsored by nonprofit organizations. Proceeds from this year’s cake walk will benefit the Gibraltar Destination Imagination Program.

Pete Olson, for years the pharmacist at Bunda’s, has been retired in Las Vegas for three decades, but still remembers with glee the musicals he directed in the 1960s and ’70s. “They were so popular we had to do three performances on Saturday and two on Sunday,” he says. “In the early years, just four or five men were involved, but it grew to a cast of more than 20. Jerry Reinhard, who owned Jerry’s Flowers, was especially great in the women’s roles.”

“Well, there weren’t many men willing to put on a dress!” Jerry says.  He remembers performing in Pajama Game, South Pacific, Oklahoma and Hello, Dolly. The shows were so popular that busloads of people came from Milwaukee and Chicago. Some years the troupe also did a special show for kids on Thursday nights.

The last play was staged more than 40 years ago, and there are no more soap box derbies. But the Sister Bay Fall Festival – to be held this year Oct. 18-20 – is still a unique, family centered event, sponsored by the Sister Bay Advancement Association, that draws thousands to the village where it all began 68 years ago.