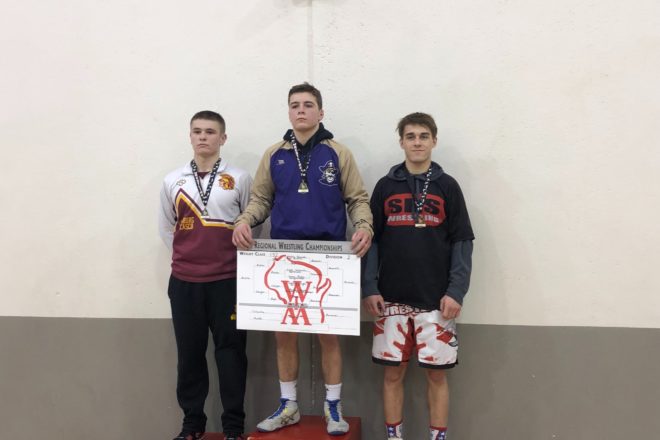 Conard, who lost to Kewaunee’s Logan Steinhorst earlier in the month, avenged that loss by defeating Steinhorst 4-1 in the 120 pound final of the Southern Door Regional Feb. 9 and qualified for this weekend’s Dodgeland Sectional.

“I definitely feel that [the loss to Steinhorst] drove me to win even more,” said Conard, who entered the meet the No. 3 seed. “After wrestling someone you know how they wrestle. I was mentally prepared for it this time and wanted to win so much more because everything could have been at stake there for my season.”

Conard’s effort highlighted what was a great performance for the Eagles. Grant Englebert, the No. 1 seed in 145, is moving on to the sectional meet by dominating his two matches by a combined score of 22-1. After receiving a first round bye, Englebert stopped Nicholas Parkin of Lourdes Academy 13-1 in the semifinal and then blanked Joe Desotelle of Mishicot 8-0 in the final.

Also moving on to Dodgeland are Austin Falish at 106 and Drew Price at 138, who both placed second. Falish secured second place by pinning Lourdes Academy’s Kaden Kapp in his wrestle back, and Price did the same by receiving a win by rule over Micah Hinds from Winnebago Lutheran Academy. Price was awarded the automatic win because he defeated Hinds by a fall earlier in the day.

“As a team I feel we did wrestle our best today,” said Southern Door coach Jerry Englebert, who was impressed with the efforts of many of the wrestlers who are not moving on the sectional meet. “We didn’t leave opportunities on the mat, we looked to score and we didn’t give up anything when the chips were down. We are a young team and I feel we grew a lot today. It’s definitely a day we can look back on and be proud of our efforts.”

“In order to make it out of the sectional I just need to wrestle my best,” Grant Englebert said. “I don’t think the pressure comes from my performance at regionals. Most of [the pressure] comes from having a good season and wanting to finish it strong.”

That is the best way to describe Jeremy Jorns’ performance at the Division 2 regional wrestling meet Feb. 9 in Valders. The 182-pound Sturgeon Bay-Sevastopol (SBS) senior went to overtime twice in picking up two victories and advancing to the Wrightstown Sectional.

After opening with a bye in the first round, Jorns defeated Bradyn Polomis from Denmark 9-7 in the semifinal match. Jorns followed that with a 4-3, double-overtime win over Luxemburg-Casco’s Garrett Jeanquart in the championship.

“Having almost a week and a half off of practice is a big hit to my endurance level,” said Jorns, who missed action late in the regular season with a strained neck. “Sure, I worked out [while I was injured], but wrestling conditioning and regular conditioning are two different beasts.”

“I believe next weekend should be a lot different for him,” Hasenjager said. “He hadn’t competed in a while, and I think the nerves got him a bit. With having a tough weekend, he saw that he can grit out matches and will be a much different wrestler this coming weekend.”

Jorns will open the day with a match against Ripon’s Joseph Kain, who has a 30-13 record. Jorns said competition naturally gets stronger in Wrightstown, including facing Little Chute’s Bryce Schumacher, who is No. 3 in the state rankings – one spot behind Jorns.

“I need to focus on getting my endurance back to where it was midseason,” said Jorns, who is trying to qualify for the state meet for the second year in a row. “I need to stay focused on one match at a time.”