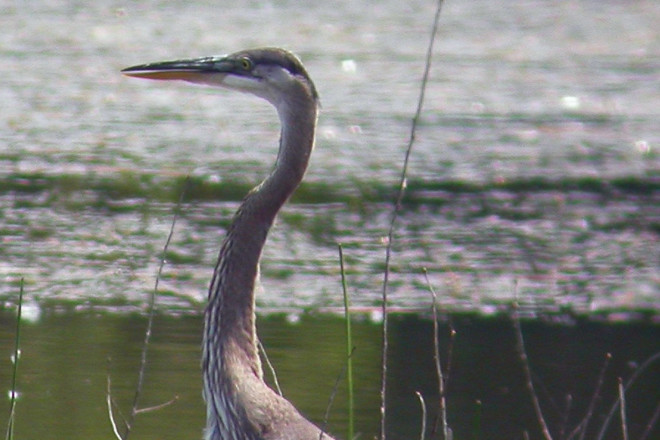 The most widely distributed and best known heron of our country, the largest and most majestic of these fascinating waterbirds, is the Great Blue Heron. In looking back to my high school years in Kewaunee, Wisconsin, 1944 – 1947, some of the most memorable adventures were spent in the old Chippewa wooden and canvas canoe that my buddy, Tony Kotyza, and I fixed up and owned all through those four glorious years.

I clearly recall the many Great Blue Herons we saw hunting in the shallows along the river, and also flying to and from their large rookery in Albrecht’s Woods, between the south portion of the Kewaunee River and the Green Bay and Western Railroad tracks paralleling River Road.

Quite often, for both the fun and the challenge, we attempted to get as close to one of the tall herons as we could. Maybe the fishing was so good that the herons waited to the last second before they took off in a “huff,” usually letting loose with a long squirted stream of white chalky excrement as they took to the air. Years ago this habit led to one of the heron’s widely used names, “shidepoke” or “shitepoke.”

Every time we saw them fishing along the river they were loners, a typical trait of the so-called “king” of the heron family – a total of 11 large heron species of the world. The only time I observed them fishing reasonably close to one another was during the depths of winter, when they remained in the shallow open water. I was able to make many observations of the herons throughout the cold months below the Petenwell Dam along the Wisconsin River south of Wisconsin Rapids where I was teaching at the time. 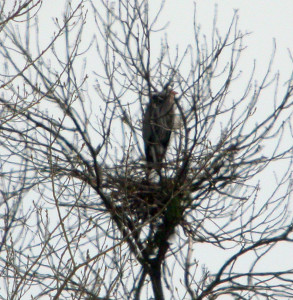 It is common for some people to confuse a heron with a crane. Both are tall, stately and dignified, and have long necks. One very easily recognized difference is that cranes fly with their necks entirely stretched straight forward. The Great Blue, as with other herons and egrets, flies with its neck kinked into an “S” shape, or, in a sense, tucked between its shoulders. Even while at rest the neck is not fully extended. Its neck vertebrae are of unequal length, and it is for this reason that the herons hold their necks as they do.

Several years ago a friend, who lived along the shores of Lake Michigan, called to tell us that she had found a dead Great Blue Heron. My wife, Charlotte, and I examined the creature, took many photographs of it, and were especially intrigued at the claw of the middle of the three toes on each foot. Its edge resembled the rounded teeth of a comb and is used by the bird to clean its plumage of dirt and debris picked up from its slimy or oily prey.

The bird’s hind toe is on a level with its front three toes so, in effect, the bird stands on all four of its toes. We also marveled at the tire tread-like bottom skin on each foot, obviously very effective in that the bird frequently walks on slippery underwater rocks.

Stretched out, this graceful and picturesque bird measures 52 inches from the tip of its beak to the end of its tail. Its scientific name is Ardea herodias (AR-dee-a heh-ROE-de-as), “Ardea” being Latin for heron, and “herodias” being Greek for heron. 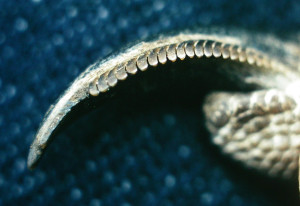 The extensive summer range of the Great Blue Heron stretches from Canada to the West Indies and Central America. These tough birds may winter in open-water areas of central to southern Wisconsin. Our Southern Door County Christmas Bird Count had them one year in the open spillway and shallows of the Ahnapee River below the Forestville Dam on December 28. They can survive in snowy weather as long as they have food. Our Southern Door Christmas Bird Counts have recorded Great Blue Herons in six of the years from 1996 through 2006.

Its native solitudes are in the shallows of river edges, small isolated ponds, lakes, rivers and marshes. There you will see it standing still as a statue, waiting for fish to swim within range; or stalking in slow motion in its hunting grounds. Its straight, powerful bill is used to spear and capture fish, salamanders, frogs, tadpoles and snakes. Don’t be surprised to see one hunting for grasshoppers or an occasional mouse in an open field.

They are strictly loners while hunting, but are very sociable and like company of their own kind when nesting. Respectfully observe one of their colonies or rookeries, and you will see that it’s not unusual for their stick nests to be 100 feet above the ground in trees often growing in swamps. A Great Blue Heron rookery may be more dependent upon a good nearby source of food than suitable trees. 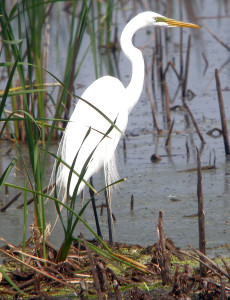 Following an incubation of about 28 days, the young remain in the nest until fully fledged and nearly as large as the adults. The “whitewash” excrement from young and adult birds liberally coats tree branches, trunks and the ground below, frequently killing the trees. This whitewash, along with dead and rotting dropped fish, produces an odor not soon forgotten by those adventurous people who visit a heron rookery. Perhaps this can be looked at as an unintentional defensive mechanism to keep people and other natural enemies away.

Great Egrets are being seen more frequently in Door County – the northern limits of their breeding range – in the past 10 years. The Horicon Marsh area has a great number of Egret rookeries as does the Mississippi River wetlands. A friend living on the east side of Washington Island told us that the Great Egrets have been nesting on Hog Island in Lake Michigan since about 2003. Chambers Island is another area of a possible rookery.

Great Egrets hunt in shallow wetlands, ponds and sloughs in search of crabs, small fish and amphibians. They may also eat small birds and mammals as well as numerous aquatic insects. It is said that they will fly 15 to 20 miles in search of their food. The egret is a migratory species, spending the winter in the south. Arrival dates in Door County range from mid-April to early May.

The American White Pelican has become a familiar bird near the shorelines of the peninsula. This is 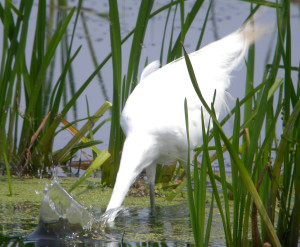 Great Egret with its head in the water.

the easternmost range of their nesting territory. In fact, they were not seen in our county before 1994. The first documented nests in Wisconsin were found in the far southern end of the Green Bay waters in 1994. Those two nests failed, but by 1995 nine nests in Brown County had about 35 pelicans present most of the summer.

Now they are common nesters on several islands and in the Horicon Marsh. When heavy storms flooded out many of the Horicon area pelican nests in July 2004, several hundred birds moved up to Little Sturgeon Bay. It is a thrill to see a large flock of White Pelicans soaring together in formation against a deep blue sky. Their bright white wings edged with black make them easy to identify.

Do all you can to help these birds by working to keep our native wetlands healthy with clean water and safe nesting areas. Here’s hoping you can enjoy the beauty of flying Great Blue Herons, Great Egrets and soaring American White Pelicans for years to come.