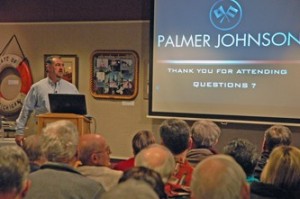 Paul Gray, program director and operations manager of Palmer Johnson International, spoke to an overflow crowd about the yacht company at the Door County Maritime Museum on March 5.

So many people showed up to hear Paul Gray, program director and operations manager of Palmer Johnson International, speak at the Door County Maritime Museum on March 5 that the main room was filled with people so that an overflow crowd had to watch a video feed of Gray’s presentation in a second room.

After running through a brief history of the company that was officially named Palmer Johnson Boats Inc. in 1956, and sold to Pat Haggerty, founder of Texas Instruments in 1961, Gray talked about the company’s years of dominating the yacht world with its line of aluminum yachts. The Fortuna was launched in 1979, and at 52 knots, it was the fastest yacht in the world and held that record for a decade.

In 2004 the company introduced its Sportyacht series, and in 2012 Palmer Johnson launched its line of carbon fibre SuperSport series with a revolutionary hull design.

Gray said the company is launching a 170-foot Sportyacht later this year, and has a 157-foot SuperSport yacht scheduled for a 2016 launch and a 213—foor Sportyacht for 2017.