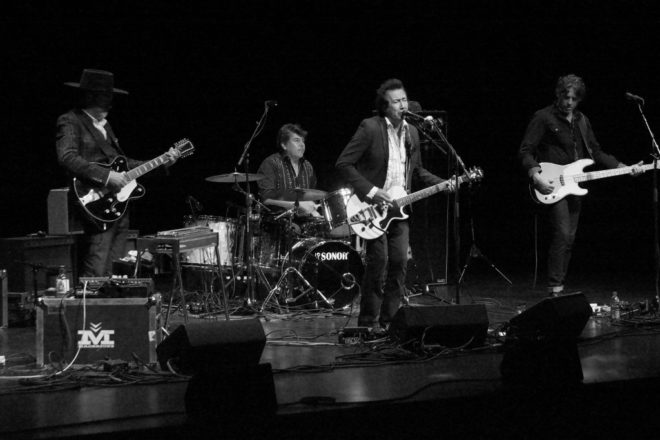 It was a great night of music from Sturgeon Bay’s pat mAcdonald and Texas music legend Alejandro Escovedo. Escovedo, on the last night of a national tour, announced during his set that after almost 45 years of being on the road, this had been his last long tour.

A genial, joking pat mAcdonald opened the night, playing his new recording, The Ragged, Jagged Way Back Home, from start to finish, just the way it was written. During the course of the night he said it was two weeks short of the year anniversary when he shut himself in a “broom closet” to make this record, and came out the other end in September, “a good time to come out of the closet,” he added.

He was joined to great effect by singers Genevieve Heyward and Nick Hoover, and for the final two songs, cellist melaniejane added drama and melancholy with low, mournful notes.

The recording begins with “The Haunted Guitar,” which is really mAcdonald’s account of the origin story of the record. That story became clearer with the live performance and the program notes for the night, which tells of his winning battle against stage-four non-Hodgkins lymphoma. The disease forced him to retire from music in 2015, saying guitar strings suddenly felt like “mean, foreign things.”

And then, as mAcdonald writes in the program notes, “One day I was fooling around with my late brother Bill’s old Gibson, which was easy to play, I’m sure he was helping me.”

As he played the guitar and sang “gibberish,” a song started to form, followed by a second. “At that point I decided to keep going until I had a whole album.”

I love the story of picking up his brother’s Gibson, and now I fully understand “Haunted Guitar.” In fact, knowing all the above details gives even more meaning to all of the songs on this deeply personal but also bigger-than-that recording by a major talent in our midst. It’s a survivor’s record.

Before the second song, he joked that he’d ripped off the title. It’s called “Running On Low,” mAcdonald said because “it’s physically impossible to be running on empty.”

That was followed by a song called “Joy” that sounded deceptively dark.

Perhaps feeling things might be a bit serious, for the penultimate number, “Dire Straits,” mAcdonald said he wanted to accomplish three things:

The mournful cello of melaniejane really stood out on the final song, “Bird Song.” It also plays a significant role in the recording.

After performing all nine songs from the record, the musicians left the stage to standing applause, mAcdonald taking up the rear in a Groucho Marx-like slouch, one-handed swinging his acoustic guitar on the way out.

A chatty Alejandro Escovedo and his three-piece band came out to rock the house. I’ve seen him several times, but he always seemed more serious, less chatty, than he was on this last night of long touring. And he and the band were on fire.

Eric Heywood was on lead guitar and pedal steel. Escovedo named a list of bands Heywood has played with, including Son Volt, The Jayhawks, Joe Henry, and culminating with The Pretenders. As the show went on, it was easy to see why he would be much in demand. Great lead guitar work. Lots of whammy bar action throughout the night, although much of the second half of the set he spent making the pedal steel guitar weep. Or was that me weeping when he played it? I can’t remember.

Hector Munoz had drum-bashing duties. Escovedo said they have played together for 30 years. Kimon Kirk was on bass. He also plays with Aimee Mann and Gaby Moreno.

The band was blistering. After playing about a half-dozen hard-rocking songs, Escovedo warned that the next song, “Teenage Suitcase,” from his latest record, The Crossing, would be noisy. “And there’s a reason for it. It’s because we like to play loud,” he said.

Playing rhythm guitar to the “noisy” tune, the 68-year-old Escovedo jumped up and down like a young punk. Then he walked up to guitarist Heywood, pointed the neck of his guitar, strumming the rhythm maniacly as if challenging him to play harder and fast. Heywood complied. Escovedo then aimed his guitar at the drummer, causing Munoz to bash even more furiously. I wrote in my notes, “He is the Boss!”

He followed that with one of my favorite Escovedo songs, “Castanets,” from his 2001 release A Man Under the Influence, delivering a very dramatic version of the song with the great line, “I like her best when she walks away.”

The great night of music ended with a single encore. Escovedo said maybe just some good old rock ‘n’ roll to end things. Maybe Neil Young, he said. An audience member yelled out “Hurricane,” and Escovedo said that was good. “We know it.” And then the band launched into an incredibly touching version of “Like a Hurricane,” with Escovedo taking the lead guitar role and whammying the hell out of his instrument.