Technically, Tom Birmingham is not native to northern Door County, as he was a month old when his parents moved to Fish Creek from Janesville. But the networking that resulted from a lifetime on the peninsula, especially as he married a local girl, proved valuable when he pursued a career in building.

Those connections are only one of the reasons that Great Northern Construction continues a viable company despite the challenging economic conditions throughout the country. 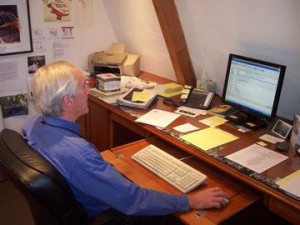 Tom Birmingham works at his desk in Fish Creek.

Tom and Linda Birmingham live in a log cabin built during the early 1900s in Fish Creek by her grandparents Henry and Bertha Eckert. The house was originally 750 square feet with three tiny bedrooms and a privy out back; however, the home is now spacious because of Birmingham’s remodeling projects.

“My aim has been to keep it looking small from the road,” he said. The additions are mostly to the rear with the front of the cabin appearing much as it always did.

Birmingham’s father, also Tom Birmingham, came to Gibraltar High School to teach English and Biology. After completing coursework during summers at UW-Madison for certification in school administration, he became principal at Gibraltar, and later, superintendent. For many years he was manager of Peninsula Players.

Tom Birmingham the younger, the eldest of 11 siblings, attended Gibraltar School, as did his own three children. He served for nine-and-a-half years on the school board.

“The best job I ever had! The focus was all on the kids,” he said.

After he graduated from high school and spent three years in the service, Birmingham attended UW-Green Bay pursuing a degree in English. But while he enjoyed reading classic literature, he found the study of literary criticism less satisfying. And at the same time he discovered a new and conflicting interest: carpentry.

He and Linda met Bill Weddig and Tom Schroeder one summer, told them they were looking for a place to park his van in Door County, and were offered a spot. In addition to the parking locale, the men invited Birmingham to work with them as a carpenter in the summers.

“I loved school,” Birmingham said, “but this was fun!”

He took a year off from school to work on the Omnibus project (the former ski hill south of Fish Creek on Highway 42) and then returned to UW-GB.

One pleasant sunny day Birmingham found himself inside reading about animal symbolism in George Eliot’s novel The Mill on the Floss. Although he still loved literature, he realized that he didn’t want to teach and suspected that he wasn’t “graduate fodder.”

“I wanted to live in Door County,” he said, “and I thought I could make it as a carpenter.” He quit school in 1979 and worked with Tom Allyn on the conversion of Ephraim’s old Anderson Hotel to a condominium complex.

“Tom and I started contracting small carpentry jobs on our own,” Birmingham said, “and as our opportunities grew, we needed to take on more people.” 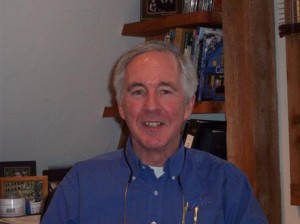 By 1986 the firm included 22 people (the six partners and 16 employees) and in 1987 became incorporated. But times and interests change, and in 1990 Birmingham bought out the two remaining partners.

But 1990 was the time of an economic downturn, especially in the building industry, and Great Northern Construction had shrunk to the owner and four employees.

And as the aughts come to a close, Great Northern Construction continues to do well, now with 20 full-time employees. Birmingham attributes his success not only to his “relentlessness” but to a number of other factors as well.

“I have long-time employees,” he said, “some with a 23-24 year history with the company. I pay well and offer full benefits, and they are doing the work they want to do. We build at a high level using a variety of materials and designs that offer a bigger challenge than stock designs.” About two-thirds of the firm’s projects are designed in-house.

“The crew has a history of working together and the chemistry is right,” he continued. “They work together because they like each other. They are high caliber carpenters who are able to make a year-around living in Door County and raise their families here.”

A number of Birmingham’s employees have bachelors and masters degrees but choose to work and live in Northern Door for the quality of life they experience.

“I work for the establishment of a reputation,” Birmingham said. “I don’t do any advertising, just word of mouth. The money I might spend on advertising I contribute to local charitable causes.

“And my philosophy of business is the Golden Rule,” he added. “I always treat people as I want to be treated myself.”

Great Northern Construction has satisfied clients, a number of whom become repeat customers. “The worst you’ll hear about us,” Birmingham said, “is that we’re expensive. But that’s what it costs to do this kind of work.”

Because of his company’s reputation, his name is familiar to people in the county, and clients make referrals to potential clients. Presently he’s working by invitation from the designer on a 15,000 square foot project in Gardener.

“I still feel like the 29-year-old carpenter trying to please everyone!” Birmingham laughed. “I’m not insecure, but I don’t take customer satisfaction for granted.”

Birmingham shares an office building at the Settlement Shops with his wife Linda, who owns a home accent shop, Great Northern By Design.

His married daughter Felice is an artist in Bellingham, Washington; his son Tom is studying architecture at the University of Colorado-Boulder; and his youngest son Stewart is a “ski bum” working at a resort in Vail.

Tom Birmingham feels that his business received a “running start” not only because of his partners’ connections but because people knew his and Linda’s fathers. And he continues to appreciate that connection with the community, whether cross-county skiing in Peninsula State Park, or bicycling (he bikes year-around), or serving on the Birch Creek Board of Directors.

“That’s all about kids, too,” he said, recalling his stint on the school board. “My favorite part of each concert is when the kids perform!”