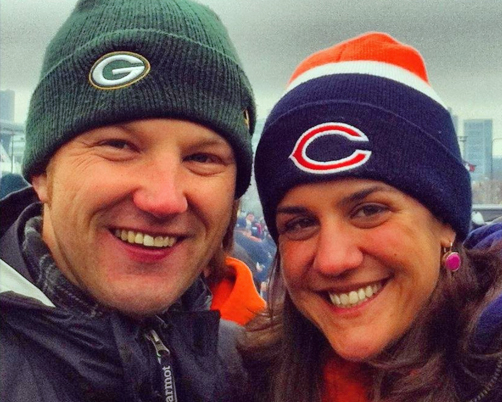 I moved to Chicago in 2012, and the question my friends from Door county ask me most often is some version of, “how bad is it to be a Packers fan in Chicago?”

They picture an entire city of Steve McMichaels, Dan Hamptons, and Mike Singletarys roaming the streets chanting “Bears, Bears, Bears, Ditka, Ditka, Ditka,” and spitting in the face of every Packers fan they see. They imagine me getting stomped when I wear my Packers hat into the bar on gameday, getting tossed out of cabs in sketchy parts of the city, and refused service at restaurants.

The truth is, none of this happens.

(Well, aside from the “Bears” and “Ditka” chants. Those happen. I married a Bears fan, and not one of the casual variety. My wife owns Bears season tickets, and her family regularly punctuates sentences with, “Bears” and “Ditka.” I’m not just talking about sentences in sports conversations. They are the most versatile words in the vocabulary of the Bears fan. For example, one might be enjoying a breakfast sandwich and say something like, “This pepper and egg sandwich is amazing!….DITKA!” or “Mom, Dad, we’re having a baby!….BEARS.”)

There are two full-time sports talk radio stations here, and three more stations that broadcast games or sports talk for significant parts of the day. When the subject turns to the Packers on local airwaves there isn’t actually a lot of vitriol anymore. If the Bears were good, I’m sure there would be (there was a momentary uptick last week), but of late the tone has been one of resignation, of reluctant respect. In fact, most Chicago sports personalities seem to like Aaron Rodgers even more than Packers fans do.

With full-time sports radio, I listen to more NFL and Packers talk here than I ever did in Wisconsin. Plus, one of my childhood favorites, John Jurkovic, is on every day here. Yes, he’s a Bears homer, but he’s always a Packer to me.

Do I trash talk? Rarely. I don’t need to. Nobody rips on the Bears as much as Chicago media and Bears fans themselves.

In Wisconsin, Packers fans and media are forgiving to a fault. Rodgers can do no wrong, Ted Thompson would have to flub a dozen drafts before anyone besides Bob McGinn would dare criticize him. And when the Packers sign a player with a screed of legal troubles, Packers fans frame the organization as some kind of football rehab center benevolently bringing a troubled player into the fold, rather than an opportunistic win-at-all-costs franchise clawing toward the mountain top like everyone else.

For the Chicago fan, every week is life or death. Losses are dissected within hours across five radio stations, dozens of websites, local TV, columnists competing for the hottest (usually negative) take, and hundreds of bars where Ditka’s picture still hangs proudly above the till. I can’t rip the Bears any worse than Boers and Bernstein will on The Score Monday, and until this year, nobody skewered Cutler, the McCaskeys, and Halas hall the way Doug Buffone and Ed Obradovich did in their Bears post-game show every Sunday (RIP Mr. Buffone, you were a Packers fan’s best friend).

The status quo in the rivalry has held since I moved here in 2012. With a win Thursday the Packers will even the all-time series with the Bears and extend an era of dominance that has seen a Packers W in 35 of the last 47 meetings, including 10 of 11. The Pack has lost just once to the Bears since 2012, and that was a game Rodgers couldn’t finish thanks to a broken collarbone. 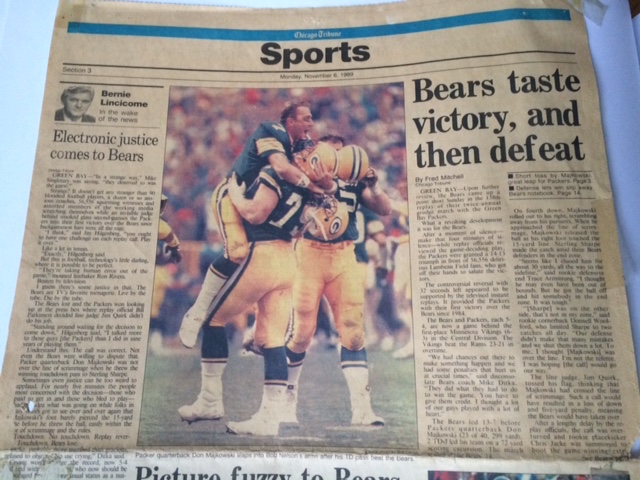 When the Packers defeated the Bears for the first time in eight tries in 1989, it sent shockwaves through the NFL.

For perspective on just how sweet Packers fans have had it since the arrival of Brett Lorenzo Favre in 1992, consider this. When the Packers won Super Bowl XXXI in 1997, the team had gone 29 long years since a title, at one point going 20 years between playoff appearances (not counting the 9-game strike-shortened 1982 season).

Those 29 years seemed like a century, and heading into the 1992 season it was inconceivable to think the Packers would climb to the mountaintop again. When LeRoy Butler sealed the team’s first playoff appearance in 20 years with the first Lambeau Leap against the Raiders in 1993, I celebrated as though it was a championship.

When they lost the NFC title game to the Cowboys in 1995, I thought the Packers’ one great shot at glory had slipped through its fingers. And when the Pack earned a Super Bowl appearance after the 1996 season, I watched in awe as the entire state descended on New Orleans to revel in what we thought of as a once-in-a-lifetime opportunity not to be taken for granted.

Now let this soak in. It has been 30 years since the Chicago Bears last won a title. That’s right, the Bears have gone longer between Buddy Ryan’s title and the John Fox tenure than the Packers went between Vince Lombardi’s final victory ride and Mike Holmgren’s hoisting of St. Vince’s namesake trophy.

Put another way, if you’re a Bears fan under the age of 35, you know the Super Bowl Shuffle only through YouTube. Prior to the 1985 Bears, Chicago last won a title in 1963. So if you’re doing the math, Bears fans have celebrated just one title in the last 52 years. The Packers have won five in that time.

So no, I don’t talk too much trash, I just try to enjoy the run, knowing it can’t last forever (or can it?). I can’t imagine the horror of being a Packers fan in this town at the peak of the Bears mania of the 1980s, and it will be miserable if this Packers tide ever turns. 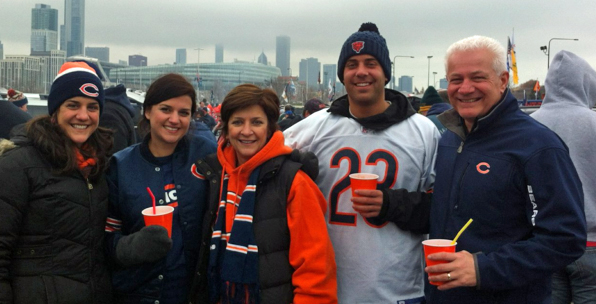 The author, a lifelong Packers fan, is now part of this family. He insists it’s not as bad as it looks (but they wouldn’t let him in this photo).

When Aaron Rodgers threw that miracle fourth down bomb to Randall Cobb to send the Packers to the playoffs in the final game of 2013 at Soldier Field, I was sitting in the end zone surrounded by my wife’s family of Bears fans. As Cobb celebrated in the end zone, I screamed “YEAAAAHHH!,” pumped my fist, then stared in stunned silence expecting to see a penalty flag somewhere, but there was none.

I turned to my left. My wife’s family, now my family, was crushed. They stared in stunned disbelief, faces morphing through the colors of stunned disbelief, anger, Cutler frustration, Trestman hatred, sports fan pain. We stood to shuffle out, and I reached to give my new cousin, who is a bigger Bears fan than I am a Packers fan, a hug.

“Don’t touch me,” she said, and turned away, refusing to talk to me or even look at me. She actually said, “I can’t even look at you.” In the car she refused to let anyone talk about the game and shot daggers into the rearview mirror at my Packers fan friend and me, and the smirks of joy on our faces.

She was cold, and I respected that. I’ve been there. Fourth and 26, Elway’s helicopter, Terrell Owens, Rodgers’ overtime fumble, Favre’s 2007 overtime interception, Brandon Bostick, Mike Sherman. For sports fans, the lowest of lows comes much more frequently than the highest of highs, and fandom does strange things to us that, at age 37, I still can’t figure out.

So yes, Bears fans are human too, and I didn’t take joy in seeing them suffer that stomach punch…but I loved being on the other side of it.

That’s what it’s like being a Packers fan in the Windy City, for now at least.