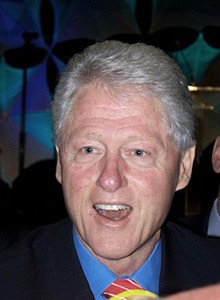 During the second week of November the U.S. Green Building Council (USGBC) held their 16th annual convention in Chicago – and over 22,000 people showed up. Why? Because people are learning that if we don’t “build green” there will be a series of irreversible costs and hardships down the line. How do we know this? The experts, the well informed and those experienced with policy were present at the USGBC convention, and spoke about these issues. The list included former President Bill Clinton, USGBC President Rick Fedrizzi, UTC Chairman George David, hundreds of senior industry people, educators, and of course tens of thousands of industry personnel.

The point of such a convention is to inform and present green building materials as cost-effective options to on-going and future projects. Rick Fedrizzi said, “We want green buildings for everyone within a generation!” To help that process, in a comparative and measurable way, the USGBC established the Leadership in Energy and Environmental Design, or “LEED” system. This is a numerical ranking system that scores the degree of greenness – through lower energy and ecologically preferred material usage – a building or development has achieved. It is a measure of progress towards environmental sustainability. On average a LEED certified building saves 30 percent on energy compared to its non-certified, non-green counterpart. Part of the LEED system is carbon counting – mapping the building’s carbon footprint and reducing it. The greenest building in America, and one with a zero carbon footprint, happens to be in Wisconsin.

The biggest concern for many builders is that “going green” means a more expensive building. Data carefully collected by USGBC show that this is not the case; in fact, there is a dollar for dollar match in many projects, and a greater savings on energy during the life of the building. But still the developers are not catching on. Rick Fedrizzi said, “There were more LEED rated prisons than K-12 schools built in the United States in 2006. That’s not right. The annual energy saved from one green school is enough to pay for two additional teachers, 5,000 text books, and 250 computers.”

Chairman and CEO George David of the huge high tech firm UTC spoke about the necessity of companies of all sizes adopting greenhouse gas reduction measures in all of their business strategies. He noted that UTC (aircraft, elevators, aerospace, HVAC, and power) is responsible for two percent of the total annual greenhouse gas output. He said his company is now committed to energy saving measures and stressed the renewable energy alternatives – solar, wind, geothermal, inertial energy recovery, and waste heat-recovery – are cost effective, necessary, and need to be done on a broader scale now. This set the stage for the keynote speaker. 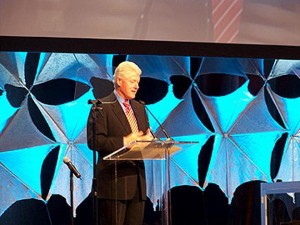 Enter Bill Clinton, the keynote speaker for the convention. “I founded the Clinton Foundation to bring together people and resources to address the planet’s most daunting problems,” he said to a convention hall holding over 8,000 people. “And, within the Clinton Foundation, we have created the Clinton Climate Initiative with immediate goals of greening America’s schools and retrofitting the 40 largest cities of the world to become green.” Clinton stressed that his job was to find a way to make this work, saying, “What I do is actualize people’s ideas.” And he is doing this by taking a business-oriented strategy to fight climate change.

Clinton congratulated his former Vice President, Al Gore, on winning the Nobel Prize for his work on publicizing global warming through the film An Inconvenient Truth. He also admonished the Bush administration for not signing the Kyoto Accord – the international treaty designed to reduce greenhouse gas emissions. Clinton said, “President Bush basically said we’re not going to do it if China doesn’t do it, so let’s have a lot of fun while Rome burns!” He said that not signing Kyoto because another country wouldn’t was simply a cop-out. “We must have a second Kyoto by 2009, and we must have broader acceptance with China, India, and the others. There is now a global opportunity for the United States to organize and democratize the reduction of greenhouse gases by 80 percent by 2050.”

But a daunting problem with the environmental movement is on the economic front. Clinton addressed this, and said, “We have to prove [greenhouse gas reduction is] good economics, not bad economics…we must be at the forefront of proving it for broad-based prosperity.” He stressed that some economies were succeeding in this pursuit. Denmark, for example, grew its economy by 50 percent without any increase in energy use, and they have added wind turbines to provide 25 percent of their energy needs. The United Kingdom has also grown its economy, and provided new jobs while achieving their Kyoto targets.

This all comes back to buildings and developments. Clinton said, “It is profoundly important you are a part of [green building] because 75 to 80 percent of the greenhouse gases come from buildings and the power plants that supply them with power.” He said, “This is our greatest opportunity for broad-based mobilization since World War II, and every time we do this [innovation] it shows it works and is cost effective. You’ll someday say ‘how can we not have zero-C buildings?’” He stressed that honest carbon reporting is needed, and is increasingly being demanded by investors and the market. He concluded, saying, “When America is in the solutions business, there’s nobody better.”

Rick Fedrizzi said, “The most progressive leadership comes from our cities. And within that green buildings must be a cornerstone for every company’s business growth.” He noted that Clinton’s partnering with 40 of the largest cities of the world was an example of that.

The USGBC Convention displayed all the effort and ingenuity being applied to fighting climate change and ecological degradation that is the fallout from cheap energy and 200 years of industrialization. What can be done? The mayors of many U.S. cities are implementing green building and reduced carbon footprint requirements in new and retrofitted buildings. This can be done anywhere – local schools, municipal buildings, and commercial and residential buildings. Ordinances need to be strengthened and updated to allow (and insist) on the use of green building practices. As evidenced from the USGBC’s leadership, this comes down to individual choices of what materials we use to build our buildings, and what energy sources are called upon to power them.

Editor’s Note: Roger Kuhns was at one time the News Editor for the Peninsula Pulse. While he still fondly refers to Egg Harbor as home, his recent endeavors in restoration, ecology, water conservation and green building have led to travels around the continent.