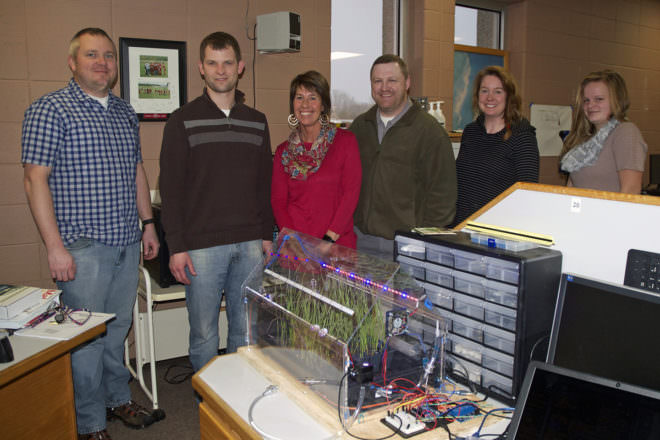 Sturgeon Bay High School student Georgia Feldman looks forward to the day when school lunches include salads with ingredients from the school’s own greenhouse.

“Instead of coming from plastic cartons, it will be fresh,” she said. 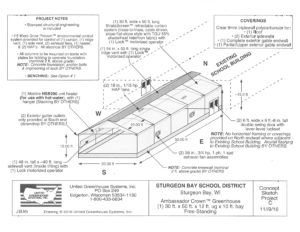 Georgia is one of the few students at the school who knows about plans to build a greenhouse on the Michigan Street side of the school. She knows about it because she is the student representative on the Sturgeon Bay High School Greenhouse Committee, which she serves on with school faculty and staff.

The idea grew out of the school’s entry into the statewide Green and Healthy Schools program, which is administered through a partnership between the Department of Public Instruction, the Department of Natural Resources and the Wisconsin Center for Environmental Education. Sturgeon Bay High School is one of 261 Green & Healthy Schools recognized on the Wisconsin Environmental Education Foundation website. Gibraltar is the only other school in the county that belongs to the program.

Then Natalie Townsend, who teaches Family & Consumer Education at Sturgeon Bay High, took a class at the University of Wisconsin-Green Bay on Green and Healthy Schools. She had to come up with a conceptual project for her school. At first she was thinking of doing something with farm to table, but then settled on creating a conceptual greenhouse project for the school.

“The idea just took off from there,” said Townsend, who also serves on the greenhouse committee. “Jenny [Spude] was coming on board as food service director. I chatted with her and she was all about the greenhouse.”

“We know that when kids are exposed and have more of a buy-in to what they’re going to eat, they’re more likely to eat it. And in a school, it’s a teaching environment, so we have to teach kids how to like things like kale,” Spude said. 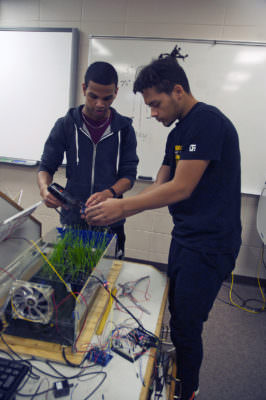 Students Andre Williams (left) and Quincy Gibson work on their computerized mini-greenhouse, which they are using to grow wheat grass. Photo by Jim Lundstrom.

The committee had just made a visit to a Tech Education room, where tech ed instructors Seth Wilson and Brian Pahl worked with students to build computerized mini-greenhouses where they are growing wheat grass that Spude suggested would be good for breakfast smoothies. Two students – Andre Williams and Quincy Gibson – were hard at work on their greenhouse. Spude mentioned the idea for wheatgrass smoothies to the two boys and they say it sounds good.

“Those two guys,” Spude said, “they were my big naysayers just trying to get them to take a piece of fruit or vegetables. And now the thought that they might be OK with wheatgrass in a morning smoothie, that kind of buy-in is the kind of buy-in we need from kids. If they don’t start eating better, I don’t know who’s going to take care of us when we’re old.”

Spude also believes there will be less waste after lunch if the students have put in the sweat equity to grow the food. “It’s kind of guilting the kids into eating the food they’ve grown,” she said. “We hope it’s going to be financially self-sustaining, primarily through the school food service buying some of those greens the kids have grown.”

She also mentions the multidisciplinary aspect of the greenhouse.

“There’s so much potential for other departments to get involved, the arts, marketing,” she said. “The kids could take herbs they grow there, dry them, pulsate them into a powder and make them into a rub to coat your fish or whatever, and the kids can market it and sell it. Instead of us selling things like candy canes and wrapping paper, they could sell a product that they grew and marketed. It’s happened in other schools around the nation and it’s worked pretty well.”