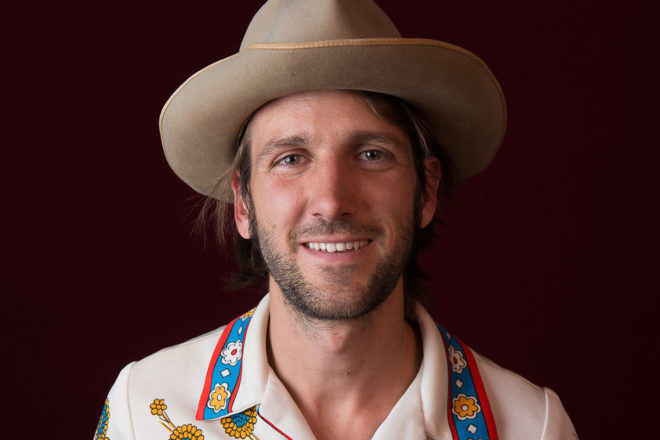 Two years ago, Texas native Greg Butera released his first solo album, Tell Me Now. Since then, he’s been experiencing what it’s like to be the frontman after years of filling a supportive role. The Pulse chatted with him about his music career in light of his upcoming show at the Door County Brewing Co. Music Hall.

Butera grew up around music – all kinds, all methods and a variety of instruments. His forte lies in guitar and violin, perfect for his southern Americana sound. Eventually he went to college to study music and has stuck with it since. For the past 10 years he’s been doing music full time (with a few part-timers woven in between).

He currently lives in Sante Fe, New Mexico, but returned to Texas for a short stint with a new group of musicians. It wasn’t working, so he moved back to Sante Fe only to find that all of the gigs he had been playing had been booked by other people.

And that’s where his solo career begins. Butera knew he wanted to keep playing music, and the only option that seemed available to him was to do it alone. For the next couple years he played around with some other musicians, and finding that it was sounding really good, they started recording some demos.

He had been songwriting for a handful of years at that point, so he had a few songs in his back pocket. It made sense for him to start recording, he said. As a result, the album is a culmination of songs both new and old.

It’s hard for him to pinpoint what was inspiring him during the songwriting process.

“It’s never quite intentional,” Butera said. “You just kind of sound like what has an influence on you subconsciously.”

His writing is also more of a product of hard work rather than something that flows naturally. He compared himself to people that can sit down and write something in a day – that’s not something that comes easily for him.

“I’ll have to play it every day for six months before I believe in it,” Butera said.

While getting the album together, Butera has also acquired more of a sense of responsibility. Most of his projects have centered around playing in other bands, which was a role he always felt comfortable filling, he said. In that sense, he wasn’t taking charge or leading a group. Now he is, whether he intended to or not.

Butera’s music career has changed in that respect. Where once he was the one waiting for instruction, now he’s the one dishing it out. That places a new amount of pressure on him. It’s also forced him to take more of a business mindset sometimes. You can’t just sit on an album – you have to go out and play it and promote it.

“I’ve never really been good at that sort of thing; I’ve always just been a musician,” Butera said.

In the end, having this new sense of responsibility acts as a motivator. Butera is working on his sophomore album amongst the multiple other musical projects he’s involved in. He still plays with other musicians, one of which is a group called The Gunsels, where they play cover music.

He’s actually going on tour with a couple groups this summer. The first leg of the trip is with John Francis & the Poor Clares, where they’ll play shows all the way down to New Orleans. From there, he’ll meet up with Esther Rose. They’ll be playing up the east coast and through the Midwest, back to Sante Fe.

Rose will be on the bill for his show at the Door County Brewing Co. Music Hall, which is actually the only venue where he’ll play his own set of tunes. He’s been there before and said he had a great time performing, so is really looking forward to returning.

So, with multiple projects in the works, Butera is taking his time with the next album. He also plans to be more intentional with things, taking what he learned while making the first one and translating it into his new work. He hopes the album will be more cohesive with a wider variety of featured musicians.

For now, Butera joked about trying not to starve on the road, but in the long run, hopes to makes more musical connections and help support and promote the artists he’s with on tour.