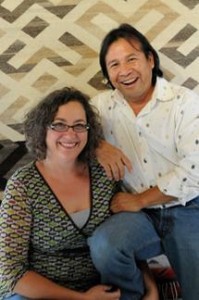 I have to say that my reason for wanting to interview Wence and Sandra Martinez were, at first, kind of silly – I simply wanted to meet the artists who had enough guts to paint their home the most delectable shade of spring green. A house, no less, that is perched among the fields and farms of Highway 57 between Jacksonport and Sturgeon Bay. Based on the green house, I had a feeling that I would like them – and their work – immediately. And I was right. Sandra and Wence Martinez are a wonderfully gregarious couple, and this friendliness translates well to the many kinds of mediums this couple uses to create their body of work.

Wence’s birthplace of Teotitlan del Valle, Oaxaca, Mexico is famous for its weaving. “I would say about 80 to 90 percent of my village’s population weaves,” Wence says. He himself was immersed in the craft at a very young age, having been taught by his grandfather and father when he was about nine years old. By the age of 13 he had received a full scholarship to attend the National Institute of Weaving in Mexico City, where he learned more elaborate weaving techniques as well as how to dye wool and draw his own weaving designs. When he graduated from the school a few years later at 17, he immediately began working with artists and companies from around the world, translating paintings, prints, and other works of art into tapestries.

Sandra’s early experiences with art occur a little closer to Door County. Born in Milwaukee, she remembers being immersed in art at a very young age. “My mother was always taking art classes. We’d also go the Milwaukee Art Museum every week, so that and the interest in what projects my mom was doing shaped my early love of art.” She would go on to focus on ceramics during high school and the first two years of college, until her work expanded to include everything from conceptual art, drawing, painting, printmaking, collage, and even the practice of arts management. After college, she moved to Chicago, taking a job that was just enough to pay her bills while she worked on her art.

Two of Sandra’s friends, Kathy Navis and Diane Magolan, were traveling down to Guatemala and Mexico and suggested they might be able to find someone who could weave her designs into tapestries.

“No one would touch my design,” Sandra says. “Many weavers thought it was too curvy and difficult to do. Wence was the only one willing to take it on.”

“I loved Sandra’s pattern – it reminded me of the period when I was weaving challenging designs for other fine artists in Mexico City,” Wence says.

When Sandra received the tapestry of her design from Wence, she was amazed – and immediately commissioned him to weave a series of rugs for the 1988 International Textile Conference that was being held in Chicago in a few months.

“Teotitlan del Valle is very much a production weaving area, and the artists rarely get a chance to develop their own name recognition. I felt strongly that it was important and honorable to put Wence’s name on the work and include him in all the events,” she says. Wence came to the States for the Conference, and it became clear that the pull the two had towards each other was about much more than the artwork.

“We fell in love immediately, and we knew we wanted to be together,” Sandra says. After Wence’s month was up in Chicago, Sandra moved down to Oaxaca for the winter – and then the couple pondered what to do next.

“Kathy [Navis] encouraged us to come to Door County and to try to establish a gallery here,” Sandra says. “We knew it would take a lot of work and a bit of time, so while we worked on establishing ourselves, we did everything we could – Wence picked fruit, cooked, bartended; I waitressed and ran retail stores. Both of us wanted a place of our own so badly we did everything we could to make it happen.”

After a bit of work and a lot of goodwill from Door County residents and fellow artists, the Martinez’s opened up their first gallery space in an old chicken coop on the same property of the former Fieldstone Gallery on Logerquist Road in 1994. A year after opening, Wence was able to quit his various jobs, and a year after that Sandra was able to quit as well. Both were now free to spend all of their time developing their own gallery.

“It was important to both of us to be able to have our own place,” Sandra says. “There are so many details and stories about Wence’s work – and my work – and we are both born storytellers anyway…”

Seven years after establishing their first gallery, the Martinez’s purchased their current property on Highway 57 in Jacksonport.

“We absolutely love our location,” Sandra says. “Even though it’s on one of the highways, it feels like it’s off the beaten path. We’ve noticed that people who love art love the ‘scavenger hunt’ of it all – driving down these country roads and finding a gem of a gallery. They feel like they’ve discovered something amazing – and that’s exactly the kind of experience we like to contribute to.”

Having worked together for 20 years, the collaborative efforts between Sandra and Wence seem to have only strengthened and flourished – and each still finds the time to concentrate on their own individual artistic endeavors as well. Wence uses a traditional loom made by craftsmen from his village in Oaxaca – and all of his tapestries are made from hand-spun and hand-dyed wool. A few years ago, he found another medium he enjoyed – photography.

“Wence shot some vacation photos of ruins and discovered he had a wonderful sense of composition,” Sandra says. “Another part of his art was born.”

Sandra has never met a medium or surface she didn’t like, and as a result many of the intuitive and ethnographic designs she is known for show up on everything from acrylics to ceramics to scarves to purses and of course, tapestries.

Through the growth of Martinez Studio, both Sandra and Wence remain remarkably humble.

“Even after all of these years, I still think we’re so surprised that all of our dreams could come true,” Sandra says. “The fact that we’ve been able to create art, run a gallery in one of the most supportive environments in the country, and be able to raise a family here – it just doesn’t get any better than this.”

Martinez Studio is located on 5877 State Highway 57, two miles south of Jacksonport. The gallery is open daily 10 am – 5 pm May through October. For more information on Martinez Studio, please call 920.823.2154 or visit http://www.martinezstudio.com.