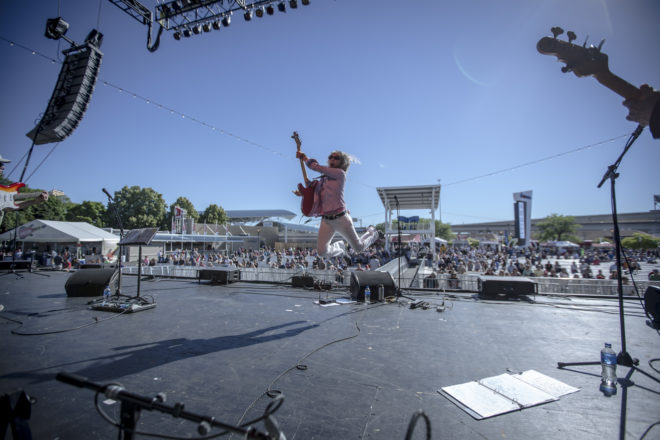 Sturgeon Bay-based blues artist and former New York City subway busker Cathy Grier lives and breathes the blues. She says she tries not to label herself or be confined to the limits of genre, but to her, it’s more than just a genre: It’s a job, a passion and a medicine.

“Blues has always been a part of who I am because I have experienced the blues,” Grier said. “I was thankful that as a teenager I had a guitar to play because that’s what saved my life in many ways. I lost my father when I was five, and I experienced hardships and love and loss, and I think that’s why the blues speak to me.”

Although the blues are a relatively simple style of music, it takes decades to truly master and “feel” them. As a working performer since 1978, Grier has developed her own style of blues, mixing her Bessie Smith-influenced vocal inflections with funk and R&B rhythms and compositional elements.

“Although traditional blues artists won’t call me blues, I call myself a blues artist because that’s what’s in my heart,” she said.

Grier is currently working on the final phase of her newest project, 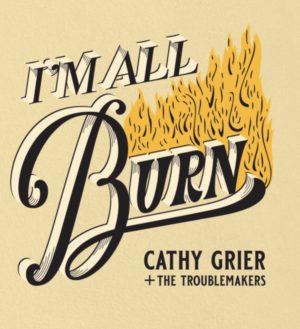 a full-production album titled “I’m All Burn,” which is set to release as soon as she can get it out of the studio. With the current circumstances of the COVID-19 pandemic, Grier and her recording engineer, Steve Hamilton, are unable to finish final production at Makin’ Sausage Music, a recording studio in Milwaukee.

“Releasing an album in the time of COVID-19 is such unknown territory,” she said. “For a DIY artist like myself – without record label support, when I’ve already made such an investment – it is not for the faint of heart.”

The record will feature 14 songs that Grier has been performing live since she moved to Sturgeon Bay in 2016 and three new songs that were written during Steel Bridge’s collaborative Love on Holiday event during three subsequent years.

The title track, “I’m All Burn,” was written during the 2018 Love on Holiday sessions with Michael McKinnon and Matt Spodl. A 1950s comic book-style art piece of the same name by local artist B. Basch inspired the song.

“As a lifelong feminist, I looked at the [objectification of women] portrayed in this art piece and had a visceral reaction to it, and I knew I had to make this song about the #MeToo movement,” Grier said. “In the comic panel, it’s this babe on the beach holding her bathing-suit top down, and she’s really saying, ‘I’m all burnt,’ but the artist cut off the ‘t,’ so it said, ‘I’m all burn.’ When I read that, I realized that that’s how I feel as a woman in the music industry, as a woman guitarist and as a woman audio engineer.”

Grier has always felt that it is her responsibility to advocate against social injustice through her music, even if her message doesn’t reach all of her listeners.

“I feel like it’s the least I can do,” she said. “I grew up in a time with the Vietnam War and the civil-rights movement, and I always felt that it is really good to speak my mind and to use the microphone for good.”

She feels that in 2020, the blues are as relevant as ever, and that the heady curative effect that playing the blues has on people is still the best remedy for feeling down.

“More people are feeling the blues than ever right now,” she said. “I do feel that you can heal the world with song. Little by little, and suddenly, through the tone of melody, life can be seen through a different lens.”

Throughout her four-decade-long performing career, Grier’s music has been characterized as exciting and soulful. During her live shows, the fun she’s having on stage is clearly contagious. At 60, she exudes the same amount of passion, energy and love for her craft as any younger performer. On her new album, she’s accompanied by a four-piece horn section – which she’s often unable to feature during her live shows – and it adds to the vivacity of her recordings. 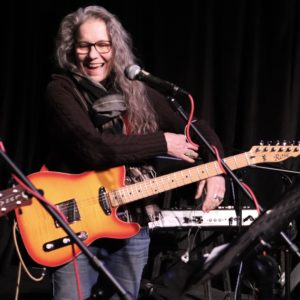 There’s a certain contrast in the musical styles of the tracks on this album, but they’re all clearly influenced by the impetus and roots of the blues in some way. She uses this medium beautifully to address what’s making people feel blue right now and to remind them that there’s hope for the future.

Along with Grier, the album features her band, the Troublemakers, and numerous Wisconsin-based special guests. Her band members include Tony Menzer on bass, Jamey Clark on drums, Jim Ohlschimdt on guitar and Larry Byrne on keyboards. Special guests include Howard Levy and pat mAcdonald on harmonica, Billy Flynn and Greg Koch on guitar, and Deirdre Fellner and Liv Mueller on backing vocals.

Not having released a full-production album in 18 years and considering the changes in the ways people listen to music since then, Grier considered carefully the form in which her album would be released.

“The problem is the minute I give it to Spotify, Pandora or Soundcloud, I throw away the opportunity of bringing in any real resources,” she said. Grier is a working musician who relies on her talents to make a living. “It’s sad that the trickle-down doesn’t go to the independents like us.”

She said she plans to release her album on her website for digital download initially, then release it on streaming services later. She’s put off the release date twice, and with the COVID-19 pandemic, she’s had to put it off again.

Although this has made her fans a bit restive, she says the result will definitely be worth the wait and that she’s extremely proud of finally putting all of her work into one album. 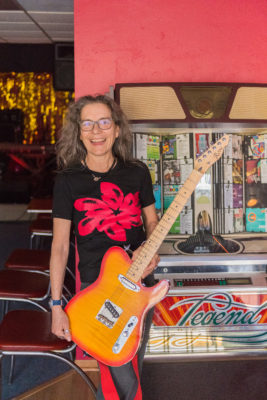 “With this record, I just want somebody to put it down and not think about anything but having a good time,” she said, grinning.

During her time of isolation and quarantine, Grier spent 17 days dancing in her living room to each track of her new album, releasing one track on social media per day.

“It released a lot of tension I had about everything being on hold,” she said. “For now, because I really don’t have a choice, I’d rather be patient and wait [for the album release]. What the future will unfold is anyone’s guess, but one thing is for sure: Music is always there, will always be, and my heart is full with support and respect for all those that are working so hard to keep us safe.”

Cathy Grier’s album can be preordered or requested for digital download by emailing her company at [email protected] To see a playlist of her dancing in her living room to her new album, visit her YouTube channel.