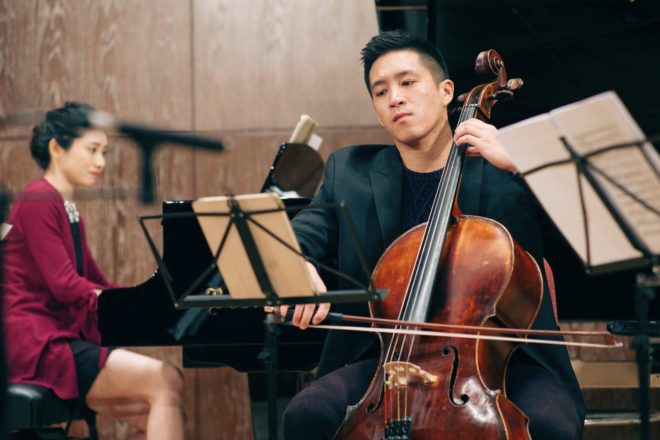 Louie at the National Theater and Concert Hall in Taipei, Taiwan. Photo by Naomi Huang.

Last Door County performance: December 15, 2019, at the Kress Pavilion, but he has recorded virtual programs there during the past year.

Vanessa McGowan (VM): Who or what first got you into music?

Ryan Louie (RL): From a very young age, I was exposed to not only classical music but also the Eagles, The Beatles and other classic rock. My dad, though not a musician, is a huge music lover and avid album collector. When I was young, he had music playing around my house all the time. As far as I could remember, my first favorite song was “Hotel California” by the Eagles. My friends thought it was weird [that] I had it on repeat on my Sony Walkman.

I also loved classical music at a very young age. My parents took me to many Carnegie Hall kids’ concerts. Also, every night I would listen to classical-music compilation albums called Mad about Classical or Mad about Violin before I would fall asleep.

My first classical love was the Mendelssohn Violin Concerto. I started playing the piano at the age of seven and started cello around the age of 10. I only happened to play the cello because my school district had such an amazing policy where every student had to pick an instrument to play for at least three years. My family and I randomly chose the cello, and after a few rough years, I finally fell in love with it.

VM: How would you describe the music that you typically perform?

RL: As a classically trained cellist, I am most comfortable performing classical music. Now this is not only Mozart, Beethoven and Tchaikovsky, but a big range of music spanning from the baroque era to modern-day, contemporary classical music.

The Griffon Quartet loves to share well-known staples from titans such as Beethoven, Brahms, etc., but a mission of ours is to share music from underrepresented composers. We try to program music from women and composers of color as often as we can. Now, personally I wish I could play jazz cello. There’s always time to learn, I guess!

VM: If you could perform with any musician/artist, who would it be?

RL: There are so many that it’s difficult to choose! I’ll mention two. One being cellist Yo-Yo Ma. He’s such a genuine and versatile musician, and his playing is so true to the style and composer. He also just seems like such a fun and great human being, and I feel I would learn a lot from just playing with him.

I would also love to play with the Cleveland Orchestra. I know they’re not a single musician, but I studied and worked with and became friends with many of their members while studying at the Cleveland Institute of Music and living in Cleveland. After watching the orchestra many, many times, I fell in love with their string sound. They move and play as one, as if the orchestra was a living organism itself.

VM: When you’re not making music, what’s your day job?

RL: I am fortunate enough that making music is my day job. As a member of the Griffon String Quartet, we have a busy rehearsal schedule preparing for performances, but also providing outreach and educating youth in northeast Wisconsin. When we’re not performing formal concerts, you can find us performing for memory-care facilities, Boys and Girls clubs, and other outreach programs.

VM: What have you missed the most with the lack of performances in 2020?

RL: I miss sharing live music with people. The music we perform is filled with so much emotion and empathy. I miss the connection we performers make with the audience. The Griffon is so embedded in our community, and it’s difficult to feel these connections through only virtual programming. Also, the audience brings life to the performance, providing energy that we feed off of.

VM: What exciting projects do you have on the horizon?

RL: We, the Griffon String Quartet, finally have a few in-person concerts at the end of May [May 29 and 30] and beginning of June [June 6] in various Door County venues. Midsummer’s Music will also present us on their summer concert series at the end of June [June 25]. More details can be found on the Midsummer’s Music website, and reservations/tickets can be made at doorcountytickets.com.

Also, as maybe some of you already know, we are currently in the process of finding a new violinist for the group. We have a few highly qualified and exciting musicians coming to play with us soon. We look forward to making our decision and announcing our new member at the end of June. Super exciting times!