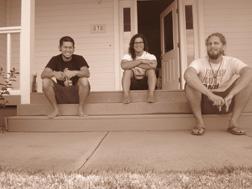 After their introduction to the area by Kim Manning and Lantz Lazwell during Steel Bridge Song Fest 2010, Groove Session is eager to continue sharing their music and energy with the Door Peninsula. Drummer and vocalist Manny Sanchez said, “We really noticed the appreciation for music and positive thinking. [Also,] we made so many great friends that Door County felt like another home.”

This trio from Ontario, California features Manny Sanchez, Ronnie Sanchez (bass and vocals), and Sarven Manguiat (guitar and vocals). They have opened for or played with George Clinton, Big Sam’s Funky Nation, and many more “lifers – folks that have been playing music their entire life and couldn’t imagine doing something different” said Sanchez.

Groove Session has even played an impromptu “renegade set” on the streets of Austin, Texas at midnight with a small generator. Sanchez said, “[We] were nervous about being shut down but thought the worst they could do is tell us to stop. We ended up playing for over two hours and drew a crowd of [over] 300 people with no PA!”

It is this type of spontaneity that encompasses their style, which caters to the vibes of each crowd by performing original songs from their albums as well as putting their own twist on many classic treasures.

With five opportunities to catch them, you won’t want to miss Groove Session at one of these stops on their Door County tour.