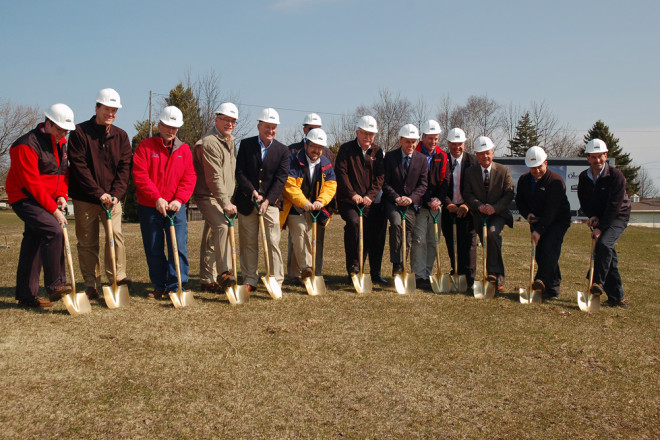 Before attempting to symbolically break still winter-hardened ground for the new Jim Olson Ford-Lincoln dealership on April 14, various parties involved in making it happen shared thoughts on what this means.

“Jim has really stepped up since the recession and kept us in the car business in Door County,” said Door County Economic Development Corp. Executive Director Bill Chaudoir.

“We’re happy to see a new building come up,” said Sturgeon Bay Administrator Josh Van Lieshout. “I think it’s a good indicator of the health of the county when banks are willing to invest and Jim’s willing to expand on his current product line.”

“If you make your living off the community, you have to support the community. If you don’t, you’re going to have a lot of bad luck,” Olson said in response to the mayor’s comments.

David Phillips of Bayland Buildings, builder of the project, said the company negotiated with neighbors for the empty lot behind the Chrysler-Dodge-Jeep-Ram dealership at the corner of Green Bay Road and Duluth Avenue.

“The neighbors are happy,” he said. “There were concessions on both sides, but we worked it out.” He added that a row of trees will be planted as a buffer between the neighborhood and the business, and the current lighting system that is able to turn a portion of Sturgeon Bay from nighttime to daytime will be replaced with more night sky friendly lights.

“This is a good opportunity and the efficiencies of having all brands here really do help from a cost point of view,” Olson said. “We can compete with anybody today because of those efficiencies we have.”

He also pointed out that they are trying to keep the project local.

“Every contractor working here, we’ve gone to great lengths to make it local,” he said. “We will not hire anybody outside of the area unless nobody here does that specific work.”

Work is expected to begin soon for an October opening.