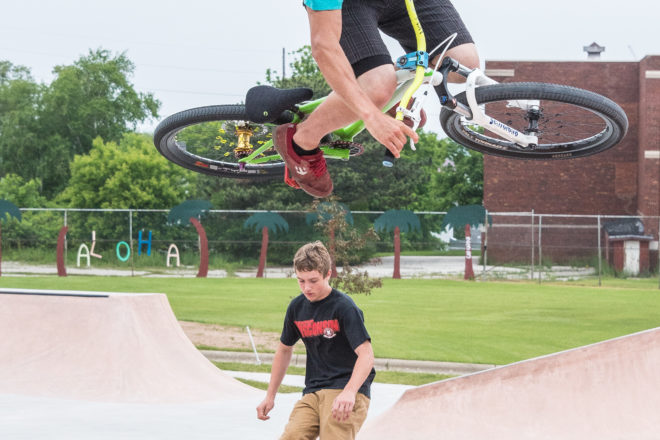 When it opened in 2015, the Sturgeon Bay Skatepark was an immediate hit with kids, teens and adult skateboarding enthusiasts. Now the group that raised $400,000 to build the park is hoping to put it under the lights.

The Friends of the Sturgeon Bay Skatepark has launched a campaign to raise $75,000 to install lighting at the park – something users have asked for since the day it opened.

“The city has always supported the idea, but the funds just have never come available,” said Paul Fruzyna, co-chair of the friends group. “So we decided to take it upon ourselves.”

Dreamland – the nation’s premier skatepark builder – designed and built the park, making it a destination park for skaters in the Midwest. Fruzyna, a city resident and the director of IS Americas for Schreiber Foods in Green Bay, is a longtime skateboarder. He said the Sturgeon Bay skatepark is one of the best in the state and would get even more use with lights.

“Right now, when the sun goes down, the skaters go home,” he said. In fall and late spring, that can be as early as 4:30 pm, but if lights are installed, it could expand the use of the park by as much as five hours. Fruzyna said it would also expand summer use because skateboarders often avoid the park during the hottest hours of the day.

The Friends of the Sturgeon Bay Skatepark group has created a lighting plan with Musco Lighting, a company with experience installing overhead lighting for skateparks. The design uses LED lights, which minimize energy consumption and light pollution. Musco has provided a custom design comprising three light poles with LED lights, light-spill-control technology and timers that shut the lights off when nobody is using the park. The company has installed lights at several other facilities in Sturgeon Bay.

The City of Sturgeon Bay will make the infrastructure upgrades to implement the project and maintain the lighting once it’s installed, but it does not have the budget to purchase the lights.