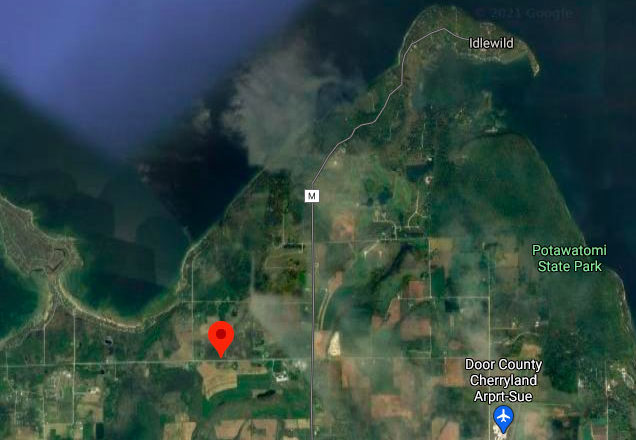 The location of the ice rescue was northwest of Sand Bay, about half a mile offshore.

A mile-long ice floe broke free from the Nasewaupee shoreline Monday and drifted out into the waters of Green Bay with 13 ice anglers aboard.

Captain Rich Olson of the Southern Door Fire Department, which took the lead on the call, was dispatched at 8:31 am. Its members executed the rescue from Cliff Top Road in Nasewaupee. The U.S. Coast Guard rescued six of the ice anglers, the Sturgeon Bay Fire Department another four.

Three from the group managed to walk to shore taking “the long way around,” Olson said. “There were no injuries, nobody got wet, nobody got cold and everybody was glad to get to shore.”

One of the rescued anglers dropped to his knees and hugged the shore after landing back on solid ground.

The rescue location was between Sand Bay and the unincorporated community of Idlewild; or, straight south of Shorewood Point to Hi-Cliff Park, said Mike Neal, a Department of Natural Resources (DNR) conservation warden who assisted at the scene with his airboat.

“It’s a really good spot for walleye fishing,” he said.

The U.S. Coast Guard (USCG) out of the Sturgeon Bay Station launched from Sand Bay to reach the ice shelf adrift in Green Bay about a half mile from shore, said Andrew Knox, boatswain’s mate, second class.

“The wind was blowing strong enough in the right direction, and the ice broke free from shore,” he said.

The strong, offshore winds Monday and warmer days prior to the rescue were similar conditions to those that existed Feb. 4 when 66 people were rescued from three separate ice floes off the shores of Gardner, Nasewaupee and Sevastopol.

During those rescues, the USCG deployed two helicopters and lowered personnel to the ice to help coordinate the rescue. On Monday, one helicopter was deployed, but the rescue had been completed by the time it arrived.

The anglers were chartered, though how they got onto the ice was uncertain. Some said they could have walked out, others that they had been dropped off by UTVs. Either way, the rescue crews met only open water by the time they arrived on the scene.

“It [the ice] had pulled away from shore completely,” Olson said. “It’s such a rapid maturation [of changing ice conditions].”

The DNR’s Neal said the ice is changing every day, and fast. The DNR’s final deadline for ice shanties to be removed from the ice is always the Sunday following March 12. Ice fishing without shelters ends when the ice is gone.

“There isn’t a date because it fluctuates every year,” Neal said.

The USCG does an ice run once a week. Knox said a lot of melt-off had started, but some areas remained solid along the bay. He said people call the station frequently to ask whether it’s safe to go out on the ice.

“We don’t consider any ice to be safe,” Knox said. “If someone wants to go out, use your best judgment.”

The Brussels-Union-Gardner Fire Department also responded to the call.