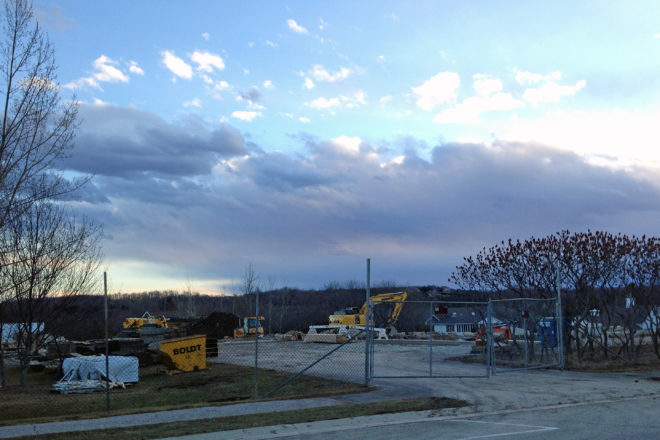 The Boldt Co. began work last month on site preparation for the Village of Egg Harbor’s new library and community center. A group of village residents is seeking to stop construction because it contends the village ignored its own ordinance regarding the use of village funds for large projects. Photo by Jim Lundstrom.

A group of concerned citizens in the village of Egg Harbor have filed a lawsuit seeking a permanent injunction to prevent construction of the proposed library/community center because, the group alleges, the village failed to follow its own ordinance that requires a public referendum for village projects that cost the village more than $1 million.

“None of this action is an indictment of the fine work many people have done for this library, but it is a deep concern by voters to have a vote to determine the will of the voters,” said Robert Doneff. “The taxpayer cost of the huge borrowing and the anticipated $125,000-plus annual cost to operate and maintain this 15,000 square foot facility is very significant. It could mount to a 30 percent increase in our village taxes for 20 years.”

The group cites the Nov. 4, 2008, municipal election when village voters approved an ordinance requiring a referendum for any municipal project of $1 million or more. The question was approved 125 to 54.

They also submitted minutes from the Nov. 7, 2016, village board meeting where it was noted the village committed to a $2 million contribution to the library project, which, the group contends, means the construction contract the village made with Boldt Construction is in violation of its own ordinance.

The lawsuit seeks to revoke the contract “unlawfully made for the construction of a library and community center, and requiring the repayment of any funds paid for such project unlawfully approved to the Village of Egg Harbor.”

“As to the merits of the allegation, we look forward to reviewing the facts along with the concerns brought forward by this group at the hearing scheduled for this Thursday. We will remain extremely transparent throughout the process,” said village Administrator Ryan Heise. “I have full faith and confidence that the village will sort through this matter and that the democratic process will ultimately decide what’s best for the long-term vision of the village.

“As for the project, the construction of the library community center has commenced,” Heise continued. “The library includes a library workroom, maker-space, children’s area, business center and history center. All needs were defined through community input, a process that has lasted nearly four years. The second floor space, which is open to the public when not in use, will fit a niche in the community in terms of seating capacity for social, cultural, educational and business gatherings. The Great Hall space could also generate revenue on weekend evenings as a wedding reception or event venue, activating the building when otherwise not in use. Great conversations continue with the Door County community for prospective uses including, but no way limited to senior services, meals on wheels, winter concerts, educational lectures, and the list goes on. This project fits into the village master plan of creating a village center, and will serve as a neutral space for community gatherings for generations to come.”

He pointed out that the majority of the costs on the $6 million project are provided through generous private donations.

“I would encourage those who are interested in the building and its associated costs to visit our Egg Harbor website villageofeggharbor.org,” he said.

We’ll have more details about the court hearing in the next issue.