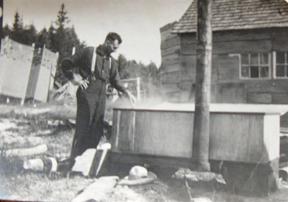 The Grovogel family, known for their family tradition of commercial fishing, is the subject of the latest Jacksonport Historical Society program. The program will take place Wednesday, September 23 at 7 pm at the Jacksonport Town Hall.

Conrad Grovogel married Elizabeth Platt in the early 1860s and settled in Jacksonport, where they raised their family. Conrad pursued a career of fishing; for a short time he fished on Washington Island, but soon returned to Jacksonport where he continued to fish in the waters of Lake Michigan. Conrad and Elisabeth’s three sons, Bill, George, and John, soon followed in their father’s footsteps, becoming commercial fishermen.

The Grovogel’s fishing was done in 25′ single-masted sailboats along with other fishing boats, while the fish were caught with nets or set lines of hooks. They also used pound (pronounced pond) nets to fish for herring. The life was arduous and dangerous.

Holly Kohls’ presentation will portray the life of the Grovogel family fishermen, along with the careers of other family members. Holly is the great-great-granddaughter of Conrad and Elizabeth. Anyone who may have family stories or artifacts for Kohls are welcome to call her at 920.743.7289.

For more information about the Jacksonport Historical Society, visit http://www.jacksonporthistoricalsociety.org.