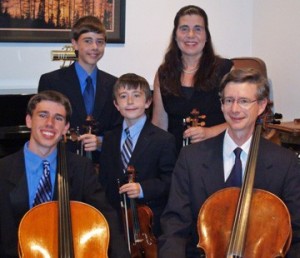 Zachary Preucil (far left) grew up in a family of musicians, attending Midsummer’s Music shows every summer, which featured his parents.

As long as I can remember, the month of June has been synonymous with a trip to Door County. I was only seven-and-a-half months old during my first visit to the Peninsula in 1991, when my father performed in Midsummer’s Music’s inaugural season, and have returned every year since. Now, halfway through my graduate studies at the Eastman School of Music, I am serving the festival as an administrative intern during the 2013 season. In anticipation of my twenty-third Door County summer, I find myself reflecting on the many wonderful experiences I have had over the years, from enjoying mini-golf, unique restaurants, and beaches as a young child to becoming actively involved in Midsummer’s concerts in a variety of capacities as I grew older. All of these experiences contributed greatly to my personal and musical growth, and as I look ahead to finishing graduate school and entering the professional music world, I also find myself looking backwards, recognizing how I have been transformed by my Door County summers from a curious young musician into a serious aspiring artist.

For much of my childhood, I was blissfully oblivious to the fact that my family’s annual trip to Door County was not actually a vacation. For my parents (my mother became one of the group’s violinists in 1992), our yearly trek north entailed several days worth of rehearsals and performances; for me, it meant getting out of school a couple days prior to the official end of the year, enjoying long afternoons on the beach with my favorite babysitter, and having the rare opportunity to affix mustaches and goatees to my parents’ pictures in the concert program book whenever I got bored during performances. I knew that they were practicing and playing concerts, but that was nothing different from their activities at home, so I figured they just did that wherever they went. They certainly didn’t seem to be working, in any case; when they weren’t having lots of fun making music (as it seemed to me, anyways), they took me (and eventually, my younger brothers) hiking, out to fun restaurants, and to social gatherings with the other musicians.

My favorite event by far was the annual party thrown by Jim and Jean Berkenstock at their beautiful Gills Rock home, which always involved me making crossword puzzles and word searches for the musicians, performing my latest cello repertoire, and enjoying wheelbarrow rides that Jim gave to myself and the other musicians’ children. Indeed, some of my happiest childhood memories involve being carted at lightning speed around the windy pathway that encircles the Berkenstocks’ house, clutching onto the arm of the horn player’s daughter for dear life and laughing delightedly as the wind whipped through my hair and the rich scents of the north woods filled my nostrils. Given that activities such as these were the norm, it’s unsurprising that I considered my time spent in Door County to be nothing more than a fun-filled summer vacation.

As I grew older, however, my activities soon began to vary from those of a typical Wisconsin getaway. When I was eight years old, I began composing, primarily for a local composition competition sponsored by the PTA. Considering that my pieces weren’t very long, Jim had the idea of performing them as unprogrammed preludes to Midsummer’s performances, which caused me a great deal of excitement; now, instead of staying back at the cottage watching Disney movies with the babysitter, I got to dress up and go to the concerts just like my mom and dad. The positive responses I received from the audiences were very meaningful to me, as I was able to witness their appreciation of my music firsthand. As I entered my high school years, and started to become more serious in my cello studies, the experience of attending a Midsummer’s Music concert became much more than doodling on the program and devouring delectable desserts at the reception. I began to pay greater attention to the music I was hearing, the musicians’ flawless interactions, and the subsequent effect that the performance had on myself as a listener. Indeed, many a Midsummer’s concert introduced me to some of the staples of the chamber music literature: Tchaikovsky’s “Souvenir de Florence,” Mendelssohn’s “Octet for Strings,” piano quartets by Schumann and Brahms, and countless other masterworks earned a special place in my heart after I experienced them in Door County.

The unusual venues in which the performances took place added an additional level of enjoyment and appreciation; it’s one thing to hear the Brahms Piano Quintet in a stuffy concert hall in the city, but quite another to hear it in a comfortable Door County living room, with a gorgeous Lake Michigan sunset visible through the windows. The beauty of these performance settings, coupled with the extraordinary musicianship exhibited by Midsummer’s performers, is what keeps me coming back here year after year – for it is within these parks, these lakes, and these picturesque villages that I am reminded of where music truly comes from.

Today, I get the same thrill listening to a performance of a romantic masterpiece as I did all those years ago soaring around Jim’s house in a wheelbarrow, because in a way, those experiences are one of the same. Here, amongst the whispers of nature and the poignant strains of chamber music, I can know how it feels to be fully alive.

This year’s Midsummer’s Music Festival kicks off with a gala opening night concert event “In an English Country Garden” on June 7 at 7 pm at the Birch Creek Music Performance Center in Egg Harbor. Tickets for opening night are $35; advance reservations are required. Encore performances of this program will be performed on June 8 at St. Luke’s Episcopal Church in Sister Bay and June 12 at Björklunden in Baileys Harbor. For more information, visit midsummersmusic.com or call 920.854.7088.