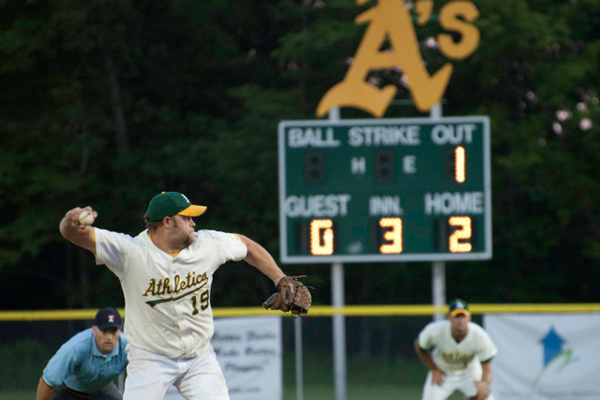 The rivalry between the Baileys Harbor A’s and Sister Bay Bays has sparked tensions for years. Photo by Dan Eggert.

The annals of sport are filled with storied rivalries. They’re called clashes, battles, and feuds. In Door County League baseball, one of the best is referred to simply as the “Grudge.” It’s Sister Bay versus Baileys Harbor – Bays versus A’s, North versus South. And in its heyday, it featured as much intensity as an amateur baseball league could muster. The origins of “Grudge” are uncertain, but most agree the rivalry peaked in the mid- to late-1980s, as Sister Bay was in the midst of a two-decade-long run of dominance that would see them win 11 league championships in 20 years.

Tom Rush, current Bays manager and a member of several Sister Bay championship teams in the 1980s and ’90s, offered his hypothesis on the birth of the Grudge, and many other long-time fans found it as good an explanation as any.

“My feeling is that it started when we beat them to clinch the championship one year,” he recalled. “We were only up a run or two when the game was called because of rain, and they weren’t real happy about it. They wanted to go get gas cans and burn the infield to dry it out but the umpire wouldn’t let ’em, and they just wouldn’t let it go.”

Rush said one of his teammates then said something to the effect of, “Boy, those guys really hold a grudge,” and the name stuck.

Jon Bastian remembered sitting on the Bays bench in that game during a rain delay and being badgered by his manager, Dick Staver, for not keeping loose. “I pointed up at the clouds and said, ‘That’s where the last one came from, Dicky boy’. Ha ha!” Bastian said, “I knew we weren’t going to continue playing.”

Mention the game to Baileys Harbor fans and you’ll often get a knowing nod of affirmation. Obviously, they wanted a full crack at keeping the Bays from the title on their home turf. Bastian said he has a distinct memory of a certain “Haba Boy,” as the A’s are affectionately called by their fans, sending a rake airborne onto the field in frustration.

For Bays followers, Grudge became the simple term to brush off Baileys Harbor complaints or smart talk. For some Baileys folk the nickname sparks hard feelings to this day, while others have embraced it and used it to fuel their pride. Some, such as current Baileys Harbor manager Bob Niedzwiecki, downplay its significance and any hard feelings.

“I think it was always more of a friendly rivalry,” he said. “Sure there were some comments, but you get that in any game. We all went to school together and hung out together, so it was good-natured stuff.”

Niedzwiecki thinks the Grudge originated earlier, probably in the ’70s, but regardless of its birth date, the tensions of yore are obvious when the subject is brought up with many players and fans. Over the years, the rivalry spurned plenty of “trash talk” in the off-season and on the base-paths. From dugout to dugout and batter’s box to pitcher’s mound, the chatter was prodigious.

A certain Bays pitcher was known to spit at players as they rounded the bases after a homerun, but only when he had time between curses. Baileys Harbor players and fans would sing the team song, which made up for what it lacked in creativity with the sting it put in Bays disciples.

“Haba, haba, haba, haba, haba boys,” they would sing, from the stands and in the bars, the latter locale creating some particularly contentious afternoons. Bastian would counter with his own evaluations of the town on the quiet side of the peninsula. “The best thing that ever came out of Baileys Harbor was Highway 57,” he says still. The common refrain for Sister Bay was and is “It’s a Bay Day!”

Even today, Rush has to be careful when he brings up the Grudge, as Baileys Harbor fans are quick to remind him where he came from.

“I got my start in the league with Baileys Harbor,” he remembered. “I played one year for the A’s before leaving the county for a few years and returned to play for Sister Bay. It’s usually not bad, but sometimes I still get reminded where my roots are.”

Ironically, the man who says “I’ve always been a Bay,” is also haunted by his past. Bastian was a talented young pitcher in the early ’80s, but Sister Bay had the great Mark Woerfel, and Bastian said he wasn’t about to ask them to start him in front of the hurler who is probably the best player in County League history. So he began his career in, of all places, Baileys Harbor.

“I just wanted to play,” Bastian said, pointing out he never considered himself a Haba Boy. He would be named the league’s Pitcher of the Year in 1982 as Baileys Harbor won its first championship since 1953. It was also their most recent, but Bastian disputes their claim to the title. “I won the title,” Bastian said. “When I went back to Sister Bay I took that championship with me in my pocket.”

This comment elicits groans and eye-rolls among A’s faithful.

Like every team in the County League, the A’s and Bays each have a watering hole of choice, and in the peak days of the Grudge, the animosity would sometimes spill over to the sites of their post-game revelry.

Pablo’s On the Ocean (now the Coyote Roadhouse) on Kangaroo Lake was the A’s haunt, where the boys would go when they got “a notion to go to the ocean” as Rush said. Husby’s, Sister Bay’s venerable gathering spot, was the Bay’s stomping ground. It’s customary in the league for players from opposing teams to stick around to knock back a couple at the home team’s bar, but sometimes custom caused trouble or was disregarded entirely. “There were days when they would skip Husby’s and head back home, and there were certainly times we didn’t stick around too long in Baileys Harbor,” Rush said.

The rivalry has several other points of contention. Most would agree that Baileys Harbor’s field is superior, if not the best in the league, “except for its location,” Bastian said. But is the water tower behind Sister Bay’s centerfield fence the cooler ballpark landmark, or is it the giant A’s logo in Baileys Harbor? Or, was it the late Freddie K., Door County’s Polka King and stalwart A’s fan?

“Ahh, Freddie K., he was an all-around decent guy, remembered Eddy Allen, the voice of local radio station WDOR who has broadcasted County League games since 1968. “He was there every week with his music. He’d always get there early and stay late.”

There are many arguments, but like the Yankees and Red Sox, one can’t argue which team has been more historically dominant. The Harbor boys have mustered just two league titles to the Bays’ eleven. Meanwhile, the Bays won their 11 titles between 1975 and 1994, often taking home the trophy with Baileys Harbor angrily behind them. “The games were usually pretty close,” Bastian recalls. “They had some good ball-players. We were just better.”

The Grudge has waned in recent years, as both teams have fallen on tough times. The great players of the ’80s and ’90s are almost all retired, and the two ball clubs have languished mostly in the bottom half of the standings of late. The reason is simple, according to Allen.

“It comes down to the pitching,” he said. “They’ve both had young, inexperienced pitchers of late. They haven’t had that one overpowering guy. John Woerfel [who, incidentally, is the nephew of Mark, son of former Bays stalwart Paul, and brother of Andy, who pitched a few years for the Bays and West Jacksonport Ports] might become that guy for the Bays, and the [Justin] Hartl kid in Baileys has some power. Brett Anschutz, with a little more time, might become the best pitcher in the league. But right now, they all need experience.”

Without the competition for the championship, it’s not quite the same according to Rush. “We’re close together, so it’s still a big game,” he said. “But it’s not what it was when we were winning all those titles.”

Even the hard feelings of yesteryear aren’t what they once were, as many old rivals are now old friends. “It’s amazing what happens when you grow up a little,” Rush said. “We’re all pretty good friends now.”

Anschutz, however, said the game still carries extra punch. “Oh yeah, it’s still a huge game for us,” he said. And, many fans will tell you the game has much in common with the Bears and Packers. “You can throw out the records,” fan Andrea Erickson says. “When Baileys Harbor plays Sister Bay, it’s always a big game.”

The Door County League is an amateur baseball league made up of eight teams with contests held each Sunday at 1 :30 p.m., always beginning on Mother’s Day. Most estimate the level of competition is somewhere near or just a notch below Division III college baseball, with players ranging in age from about 14 to some in their 50s.

For many of the players in the County League, the uniforms are less than flattering. The only part of most of these bodies that’s supplement-enhanced is the beer gut many players sport. So why do men, especially grown, aging men, continue to don the skin-tight uniform well into their 40s and 50s?

“I think it’s the athlete in them that drives it,” Sister Bay Bays manager Tom Rush said. “If you can still play, somebody will want you, or probably beg you to play. But it’s the camaraderie, too. You’re with friends and it’s fun.”

Jon Bastian, long-time player and fan, put it more simply. “For guys in their 30s and 40s, there’s always been one reason they’re still playing- because they could,” he said.

A greatly underrated Door County attraction, admission to County League games is cheap, as are the brats, hot dogs and cans of beer. Kids can still chase down foul balls and home runs for change, and fans can soak up the sun, while amused by the banter between fans and players. But don’t be surprised if things get a little passionate, because though it’s just an amateur league, the loyalties are strong.

“I guess people care because the roots are so deep,” Rush said when asked why people care so much. “A tourist might wonder why there’s all the hoopla, but you have to know the history. Maybe it’s respect for the way the game is played, or watching kids grow up, or the chance to see a pretty good college player come up to play in the summer. I can’t quite put a finger on it. The roots are just deeper than you might think.”