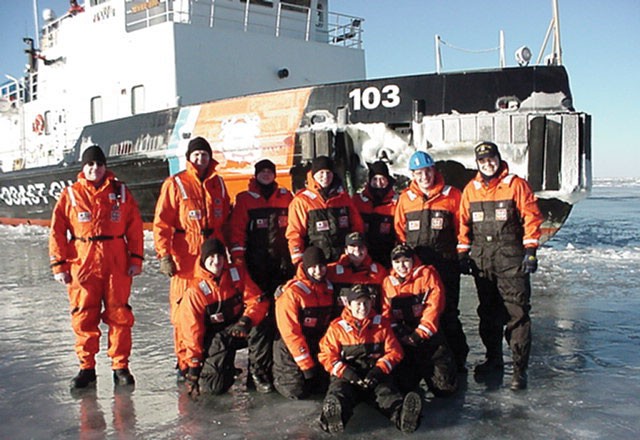 A former crew of the “Mobile Bay” poses on the ice just feet away from the ship. Photo provided by Ensign Greg Dahl.

Mariners through the centuries have faced the reality of Lake Michigan’s relentlessly changing moods. Violent storms, raging windswept waves, fog, shoals and reefs have ushered ships and their crews to their ice-water graves off the shores of Door County. Those conditions are no less imminent today as they were then; yet, through it all there has been and still exists a guardian for the unsuspecting mariner:  The United States Coast Guard.

With over 300 miles of Door County shoreline, professional mariners and recreational boaters alike rest a bit easier with the knowledge of the Coast Guard’s presence. The Coast Guard’s rich history on the peninsula dates back hundreds of years when life saving stations along the shores rescued countless schooner crews and other souls from their watery perils.

Today, the Coast Guard’s responsibilities can be divided into three categories:  Search and Rescue Operations, Maintaining Aids to Navigation (buoy tending), and Icebreaking. And winter is no time for rest for Door County’s Coast Guard personnel or its principal ship – the Mobile Bay. She is the only icebreaker on Lake Michigan and the only one based in Wisconsin. A 140-foot icebreaking tug with a beam (or width) of 37 feet, she sits 13 feet in the water and has a masthead reaching 65 feet into the air. This 690-ton ice-crushing machine is one of nine vessels in her class. Simple in construction, she resembles an oversized harbor tug more than anything else. Equipped with a 900-ton barge, she performs the same three tasks as the Coast Guard itself:  buoy tending, icebreaking, and search and rescue. A ship with many hats, the crew and officers that keep her running are just as multi-talented.

Although there are fewer search and rescue missions or “cases” in the fall and winter, the Sturgeon Bay Canal Station and the Mobile Bay icebreaker continue a busy schedule, since winter rescues can mean more severe weather and different tactics.

New technology has allowed outdoor adventurers to push the limits of exploration with sophisticated gear and outerwear, as well as hand-held global positioning systems. These broader limits, however, don’t account for unseen ice fractures caused by rapidly switching wind. Often adventurers don’t take the time to sample the ice for its thickness, a time-consuming and therefore tedious chore. The Sturgeon Bay Canal Station’s Executive Officer, Stephan Ross, cites cases of falling through the ice too numerous to tell. Though he didn’t care to reveal recent details of fatalities in Door County, he did underscore the necessity of safety, saying, “Our main goal is to educate more than anything.”

A Chief Bosun’s Mate, Ross breaks down the formula for survival simply. He says, “People should know their conditions. Local knowledge is the best bet, especially in winter – know the thickness of the ice.” His response to ice conditions is directed toward the many ice fishermen that either fall through thin ice or become stranded on shifting flows heading further toward deeper water and increasing danger.

Ross’s crew includes both Washington Island and Sturgeon Bay Canal Station personnel. This group of 28 men and women are involved in rescues from the Garden Peninsula (Michigan) in the north to as far south as Kewaunee. Not all of the water is iced over in the cold weather season and they will travel as far as the middle of the lake to assist in rescue or towing operations.

This  is  accomplished with  the  assistance of three boats:  a 41-foot utility boat, a 27-foot “Safe Boat,” and a 25-foot “Safe Boat.” The latter boats are quick-maneuvering vessels with twin outboard engines. They are faster but limited by the sea conditions in which they can operate. The larger 41-footer also has limitations imposed by Coast Guard protocol. In particular, a sea running in excess of eight feet with wind speeds of 30 knots or more could compromise the success of a rescue. When these conditions are reached, the Milwaukee Shore Station may dictate the need for the Mobile Bay’s assistance or perhaps even a helicopter rescue from the Air Station in Traverse City, Michigan. These swift rescue helicopters can cross Lake Michigan and be in Door County waters in less than an hour.

Once the water is iced over, the Coast Guard’s Door County fleet is reduced to one 22-foot ice/air boat. Similar to an Everglade air boat, this vessel has a large fan which noisily propels its aluminum hull across the ice. The advantage of this boat is that it can be launched virtually anywhere, with no need for a launching ramp. Coast Guard personnel can trailer it to the nearest beach access and be moving in minutes. Other ice rescue tactics include tethering crew together with a line, much like Arctic explorers, as they approach victims that have fallen through thin ice. If the victim is unconscious or cannot get a ring buoy around them, Coast Guard personnel will even jump into the water to assist the retrieval. Most shore station personnel are certified rescue swimmers, able to not only survive in large waves and cold water but also to complete seemingly insurmountable tasks.

The Western Lake Michigan Sector dictates many of the Search and Rescue Operations. The headquarters of this sector are in Milwaukee. Although Ross makes day-to-day case decisions based on his experience and territory, quite often a coordinated effort is required from different stations. “You just can’t have too many assets out there on a case,” he explains. An asset to the Coast Guard is a vessel, whether in the air or on the water. To a mariner in distress this description of an asset would be an understatement – it can mean pure salvation, the difference between life and death. When asked what significant case or water rescue stands out in his mind, Ross pauses and says, “We do it as best we can,” a statement of humility from a man with over 20 years of rescue experience. One can only wonder what the real answer may be.

Ensign Greg Dahl, onboard the Mobile Bay, walks over to a filing cabinet containing the dossier of all the buoys the ship will be removing and replacing. Each buoy has its own history, he explains. In this way if a buoy is not keeping watch, or is off its position, they can determine whether a larger weight will be needed or if, perhaps, it was knocked off its location by a vessel. All this information is stored, referenced and updated repeatedly.

Lighted buoys with larger bases will be replaced with winter buoys, or hulls as they are called. The winter buoys are cylindrical and keep the ice from riding up them. They can actually endure a winter of submersion under an ice shove without sinking. Dahl points to a weight on the barge, saying, “That one there is 12,500 pounds, our biggest.” A monster block of concrete, the weight is attached to a chain and the buoy. A crane operator, who doubles as the cook, positions the buoy when it’s time, lifting it above a moving deck, while simultaneously a deck rigger hits a pinning device. Concrete, chain and metal are running off the deck in seconds, a dangerous job that could turn deadly with any lack of concentration.

Once the long process of buoy tending is complete, the crew can look forward to a winter of icebreaking. As the winter freighters and commercial fleet come to lay up for the long season, the Mobile Bay quite often will be called to break ice between the Rock Island Passage and the Sturgeon Bay Ship Canal. Freeing this ice for shipping traffic is not limited to the waters of Door County. The ship will also assist other Coast Guard cutters in the Straits of Mackinac where prevailing west winds pile ice high and deep, creating literal road blocks for ships in transit.

Last winter the Mobile Bay broke through 20 to 30 feet of brash ice in the straits. The wind will blow the ice into large heaps, causing ice hills that are impenetrable to most ships. A larger Coast Guard cutter, Mackinac, along with the Mobile Bay and others, may all be working the same patch of water and ice, busting it with their sheer force.

Although Ensign Dahl is a helmsman onboard the Mobile Bay, he more commonly calls himself a boat driver. “We back up a few ship lengths, 100 to 200 yards, then we simply ram the ice at full throttle. Repeating this time and again, the helmsmen steer for the notch they made in the last pass.” He recalls spending eight hours in the Mackinac Straits making a track for a commercial tug and fuel barge carrying heating oil from Sarnia (Ontario) to Chicago. The sun rose and set on their relentless icebreaking, but in the end success came to the weary crew. Dahl also went on to tell of a two to three-day run between the Rock Island Passage and Sturgeon Bay. They retraced their track, busting up the constantly freezing path before them.

“The more ice you break, the more ice you make,” he explains, going into an explanation of plate ice, the stuff icebreaker crews dream of. Plate ice is simply flat sheet ice that Coast Guard cutters rip through like butter. It must be a reward to hit this after the end of a long journey, bucking the icy drifts that bind the shipping lanes of our northern latitudes.

While the Coast Guard and its fleet keep busy with these three main duties, in the end it is hoped that the prudent or professional mariner will always go seaward with a safe and prepared vessel. There are times, however, when the hand of fate puts us in peril, time slows and the waves turn minutes to hours. It is comforting then to know there are guardians willing to go the extra mile – with you and for you.