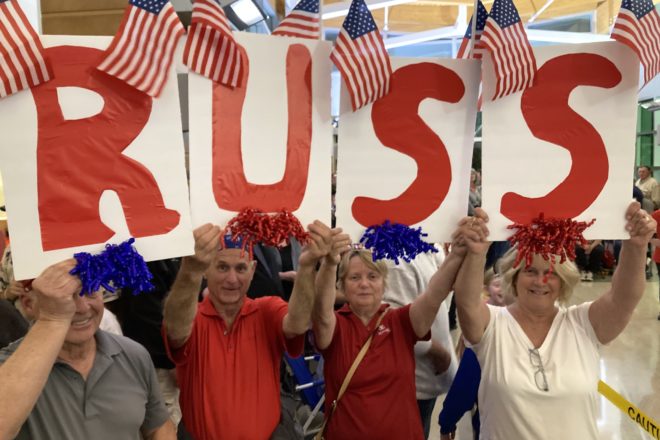 And I was just there to welcome Russ

by JOHN MIELKE, Special to the Peninsula Pulse

It had been more than two years since my cousin Russ Schroeder, who now lives near Park Falls, Wisconsin, told me he would be part of a Never Forgotten Honor Flight. To be perfectly honest, I had forgotten. The COVID-19 pandemic postponed his trip and any plans I had to somehow be involved in honoring his service in Korea and Vietnam during the early 1960s.

As the pandemic loosened its grip, the Honor Flight was back on. Russ was excited to be one of many veterans who have made the incredible journey to visit memorials in our nation’s capital.

When Russ was in Vietnam and I was a pre-teen, I remember – or at least I was pretty sure – that goodie packages from home included Kool-Aid to help make the water a bit more drinkable. Sad to say that I don’t remember a specific day when he returned from service or whether family and friends were there to welcome him back.

Now we would have that chance.

Russ’ son Jason encouraged friends and family to write welcome-back letters that organizers would hand out on the flight during “mail call.” I wrote that the 11-year-old kid was proud of his big cousin and that I have always been proud of his service to the United States – and I tossed in a package of Kool-Aid.

Buying a single Kool-Aid packet at the Pick ’n Save generated a curious “Just one?” comment from the checkout person. I thought about telling the whole story, but those in line behind me seemed to be in a hurry.

The Honor Flight was scheduled to arrive back at Central Wisconsin Airport (CWA) near Mosinee between 10 and 11 pm. Wow – that puts me back in Sturgeon Bay somewhere close to closing time. Not to mention dodging deer along Highway 29.

Maybe I could be there when he leaves? A veteran who lives at my mom’s assisted-living community in Wautoma, Wisconsin, had recently celebrated his 90th birthday with an Honor Flight from CWA. I asked Fred what time the plane left. “About 5 in the morning,” he said. Well, still dark and plenty of deer. But Fred said something that hit home: “It’s a great event. You should be there.”

OK, a Motel 6 reservation would make the drive back a bit safer.

The website suggested that friends and family arrive between 8 and 9 pm. Two hours before the plane? Really? When I pulled into CWA that evening about 8:45 and saw a gentleman directing traffic to a nearly full special-events parking area, I knew this was a bigger deal than I had imagined. My sister, Judy; another cousin; and their husbands made four large cards spelling “RUSS.” The guys were going to wear do-rags. It was quickly apparent that they would fit right in.

The small airport was packed. Signs, people of all ages, veterans, flags, phones and cameras at the ready, plus a stable of Harleys. When the Honor Flight touched down, one by one the names were announced. Each veteran walked the corridor immersed in the kind of Welcome home! they may not have heard decades ago.

The cheers, the tears, the applause, the smiles, the handshakes, the hugs, the kisses. Like Fred said, it’s a great event, and I was glad to be there.

About halfway through the group of more than 50 veterans, our little group heard “Russ Schroeder” over the loudspeaker. Five minutes later, there he was, walking with his friend Jane, shaking hands with other vets. Right on cue, the four large “RUSS” cards went up. He came over for hugs and handshakes, and I got to say something I had been waiting 57 years to say.

After all the veterans had been announced and warmly welcomed, a large group of Harleys led busloads of heroes back to a hotel in Wausau. A loud and fitting escort.

The next day, I wondered about “mail call.” Did Russ receive my letter? Did he get the Kool-Aid?

I got my answer that night via email. Russ received many letters, but he postponed reading them because he was pretty sure it would be an emotional experience repeated time after time. He asked whether he had to use the Kool-Aid.

No, Russ, you don’t have to. But did the young kid remember correctly about Kool-Aid being sent halfway around the world?