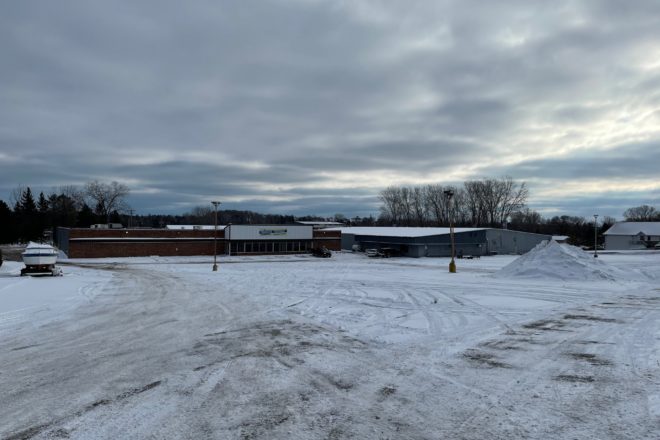 These buildings off Egg Harbor Road in Sturgeon Bay – under new ownership since 2017 – were most previously owned by Palmer Johnson and, before that, were Pamida and Save A Buck stores. The owners are using the building on the left for storage, and they want to turn the building on the right into Virlee Gunworks, a gun store and indoor shooting range. Photo by D.A. Fitzgerald.

Plans for a new gun store and shooting range doing business as Virlee Gunworks in the former Save A Buck building on Egg Harbor Road in Sturgeon Bay were revealed last month.

The city’s Aesthetic Design and Site Plan Review Board considered whether to grant a certificate of appropriateness for some minor facade improvements the owners intend for the 1019 Egg Harbor Road address.  These include painting the exterior of the building and adding two new canopied doors. The 96,000-square-foot parking lot would also be freshly blacktopped, with parking spaces painted. The existing lighting would be maintained, and signage plans would be presented for review during a future meeting.

“Anything they did would improve it,” said Marty Olejniczak, Sturgeon Bay Community Development director.

Steve Estes is one of the principals for the investment group doing business as 1023 LLC that owns the whole property, including the building next to it – once a Pamida – that’s being used as a storage facility.

The buildings had been vacant since Palmer Johnson closed down. The investors purchased the property in 2017, then brainstormed ideas for development.

“There are lots of hunters, lots of gun enthusiasts,” Estes said. “I like to shoot, and air conditioning and heat makes it a lot nicer.”

If they proceed with their plans, it will be the only indoor shooting range located within city limits, Olejniczak said.

The city’s review board approved the certificate of appropriateness for the facade improvements Dec. 14 with a few minor changes. No other public approvals are needed, given that the property is located in C3 zoning for commercial/light industrial use and the shooting range and gun store are allowed uses under that zoning.

Shooting ranges have quite a few standards, however, and the permitting process is regulated by the state under the city’s building code, Olejniczak said.

Estes said they started the process to open the business because with all the required permits, it would take time and expense to turn the building into a shooting range. They’re still crunching numbers and figuring out plans.

“There are a lot of people asking, but we don’t have details yet,” Estes said.

He also said the possibility exists that they’ll decide on another use for the building.

“Regardless of what happens, that property will get developed,” Estes said.