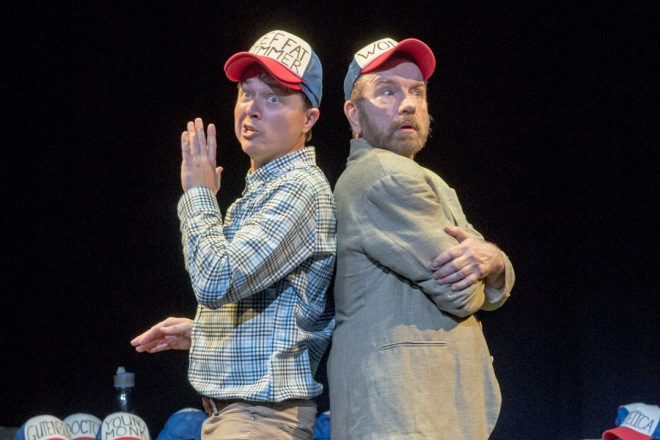 A Fresh Show for a Fresh Stage

Driving along 3rd Avenue for the past couple of years, it’s been impossible to miss the steady and monumental construction that’s been occurring at the newly christened Third Avenue PlayWorks (TAP), formerly Third Avenue Playhouse. And because I could see only the changes made to the exterior, I couldn’t wait to get in to see what had been done on the inside.

I was not disappointed. The large picture windows give a refreshing, open feel to an already sleek and modern interior, and brighten up the space immensely.

After purchasing my ticket at the box office, I was directed to the new theater entrance. Anyone who may have been worried that TAP’s expansion project would change the intimate feel of its productions need not have been concerned. The renovation kept everything audiences loved, while updating and bringing more technical opportunities to the space.

The stage is framed by the exposed bricks of the building that were revealed during the renovation, showing that although the space has received a new coat of paint (and much more), the bones and heart remain.

As impressive as the new stage is, audiences will be even more delighted by the play christening it, Gutenberg! The Musical! This show is perfect for audience members of all levels of theater knowledge, and whether one knows a lot about how a musical is created or has barely heard of Les Misérables, no one will leave without a good laugh.

Bud Davenport (played by Doug Mancheski) and Doug Simon (played by Chad Luberger) are two middle-aged friends who are hosting their first reading of a new musical: a “historical fiction” about Johannes Gutenberg and his invention of the printing press (though that’s about as historically accurate as it gets). Among those in the audience are some bigwig producers who could potentially make possible their dreams of seeing Gutenburg! The Musical! on Broadway.

Mancheski and Luberger play dozens of characters throughout the show, a daunting prospect made simple through their execution: They have a hat for every character with the character’s name written on it. From drunkards, to an evil monk, to a German wench and love interest akin to Audrey from Little Shop of Horrors named Helvetica (yes, like the font), to children, to Gutenberg himself, they switch characters with the flick of a hat.

Along the way, Bud and Doug help us through their creative process by explaining everything from the idea of “I want a song,” to metaphors and foreshadowing, all while hoping they’ll receive the coveted Broadway contract. But will they get it?

I won’t spoil that for you, but I will tell you that as a theater lover, I found myself drinking in the references and homages sprinkled throughout. I could pinpoint exactly which shows were being referenced and spoofed in the music and story: Beauty and the Beast, My Fair Lady, and the list goes on and on. If you’re a fan of musicals and their tropes, you’ll have a good time trying to catch them all. But even if you’re not familiar with many – or any – musicals, the hysterical, sincere tale of two friends sharing their passion project will not only have you in stitches, but rooting for them along the way.

Gutenberg! The Musical! is a delightful show that opens TAP’s new space wonderfully, and that space promises many outstanding and memorable performances in its future.

There’s still time to see Gutenberg! The Musical! before it wraps up this weekend. Tickets are available at thirdavenueplayworks.org.