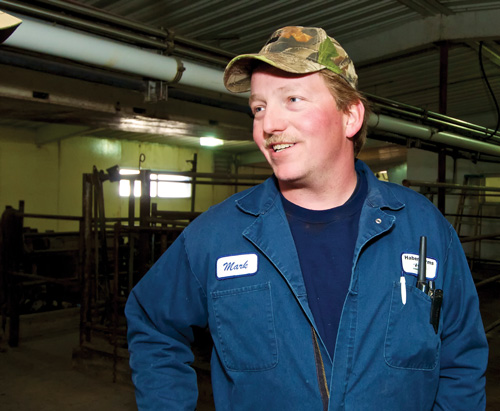 Mark Haberli (pictured) and his brother Joe Haberli Jr. say that a CAFO classification for their farm would force them to get larger, which they don’t want to do. File photo by Len Villano.

Two farming brothers made what they referred to as a “last-ditch effort” by appearing before the Jacksonport Town Board at its monthly meeting on May 24 to enlist the help of residents in stopping what they say are punitive measures from the Wisconsin Department of Natural Resources (DNR) to turn their 300-cow farm into a Concentrated Animal Feeding Operation (CAFO).

“We don’t want it to happen,” said Joe Haberli, Jr., who was at the meeting with his brother Mark. “We don’t want to get bigger.”

A CAFO as defined by the DNR is a farm with 1,000 or more animals. However, if a smaller farm has pollutant discharges to navigable waters or contaminates a well, the DNR can designate that farm a CAFO, and require it to abide by more stringent CAFO regulations.

That is what happened with the Haberlis when in September 2014 a contractor with Waste Control Services of Bonduel, Wis., spread liquid manure on a field with a sinkhole at a time that included torrential rain. The result was the contamination of residential wells in the area. The Door County Health Dept. reported at the time that 16 people were sickened by tainted well water.

As a result, the Haberlis cannot spread manure on soil less than 24 inches to bedrock, which means they have to truck the manure farther south where there is deeper soil. Joe said the cost of trucking the manure has become a burden to the 70-year-old family farm.

“We’re sorry about what happened two years ago,” he said, adding that it was a learning experience for all involved. “Our per se punishment is being forced into CAFO.”

Mark Haberli said the situation is forcing them to consider expanding their herd to offset the costs of trucking.

“I don’t want to do that,” he said. “I want to stay quality, not quantity, but with this rolling down the turnpike, were looking at almost a quarter million in expenses to put us in that CAFO…It could possibly put us out of business.”

Joe said he has been investigating European technology for manure nutrient distribution because they are light years ahead of American technology in that area. He said if the town could somehow help get the DNR off their backs, they would be willing to invest in technology that knifes smaller amounts of manure into the soil so that the roots will take up all the nutrients, leaving no possibility of runoff from the field.

“We want to stay where we are and bring this technology from overseas to here,” he said.

He added that a DNR public hearing on their situation is imminent, and then it will be a done deal.

“It’s our last-ditch effort,” he said about appearing before the town board. “We need town outcry. The public support would mean the world.”

Residents in the audience advised the Haberlis to contact their legislators to get them involved. The town board voted to send a letter in support of the Haberli farm not being classified a CAFO to Rep. Joel Kitchens, Sen. Frank Lasee and the DNR.