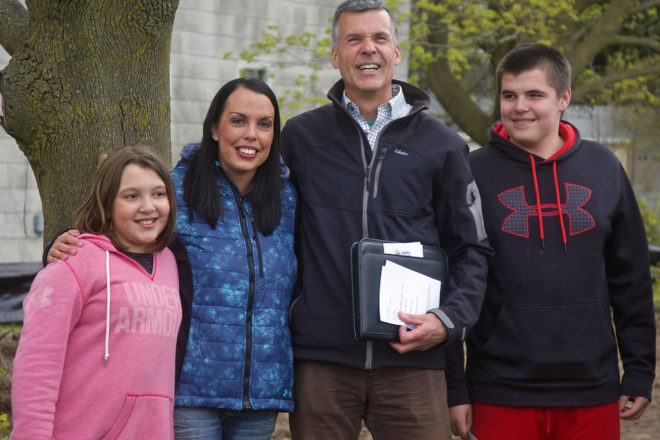 The Bilodeau Family – Elizabeth, Kendra and Matthew (far right) – are all smiles as they stand with David Van Dyke, executive director of Door County Habitat for Humanity during a groundbreaking ceremony for the 40th Habitat home in the county. Photo by Jim Lundstrom.

Even though it was a chilly, gray day in May, the atmosphere was incredibly warm as ground was broken at 741 N. 6th Ave., for what will be the 40th home created by Door County Habitat for Humanity since its inception in 1993, and the future home of the Bilodeau family.

Kendra Clarizio-Bilodeau and her children, Matthew and Elizabeth, were joined by family, friends, Habitat board members and Executive Director David Van Dyke, as well as volunteers who will be helping to build the home.

“It’s exciting. There’s a lot of emotions that go into applying and then waiting for the process, and then you get accepted and it doesn’t seem real,” Kendra said. “But today, you break ground and you realize it’s happening. There’s one thing of signing documents and approving a floor plan, but when you’re standing and watching the layout and the stakes and the groundbreaking, that’s when it becomes a reality. And I’m sure it will become a different reality when walls are going up and then moving in.”

Van Dyke said they hope to have the home finished in October or early November. This will be the first Habitat home to include a garage. 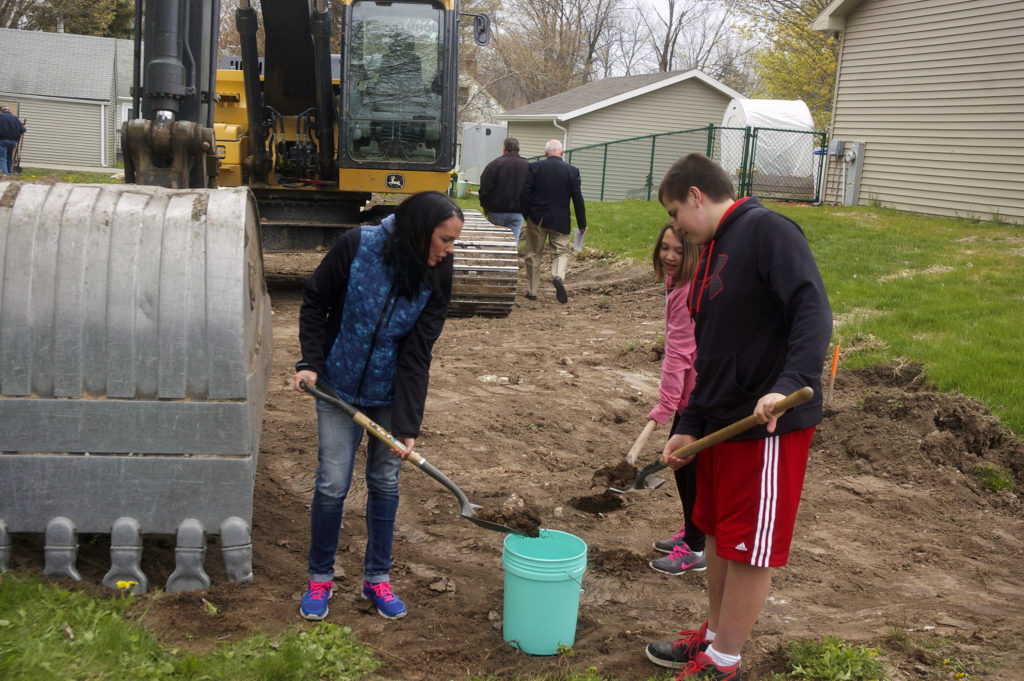 After the formal groundbreaking ceremony, the Bilodeaus shoveled some dirt from where their new home will stand into a bucket. Kendra said she didn’t know what they would do with the dirt. “Maybe plant a tree,” she said. Photo by Jim Lundstrom.

“We bought the lot from the city and the city requires a garage, so that could delay things, but we’ve had a really good response. I think we’ll have the necessary volunteers to do the garage, so we’ll have her in there as a soon as we can,” he said.

Van Dyke – who is not involved in the selection process of program applicants; that is conducted by a committee of volunteers – said it is easy to see why Kendra and her family were chosen for the Habitat program.

“When I first met her, she had turned in her application and was very excited even at that time, very enthusiastic and she really seemed to have her stuff together. She had a plan and direction. It did not surprise me when they picked her,” he said.

Kendra said family and friends are excited and supportive, but she did have to explain to some family members that the Habitat program is a handup not a handout.

“A lot of people don’t understand the program and how it works,” she said.

Homeowners are chosen based on economic need. For example, a family of three cannot have a household income of more than $34,680, or 60 percent of median family income.

It was obvious that Kendra had already made connections with some of the volunteers who will be working on the project. Asked about that, she said, “One thing I can say about everyone, they make the process so much easier by being so friendly. They welcome you with open arms. They’re warm. It’s beyond friendships that are starting to grow. It’s an additional family.”